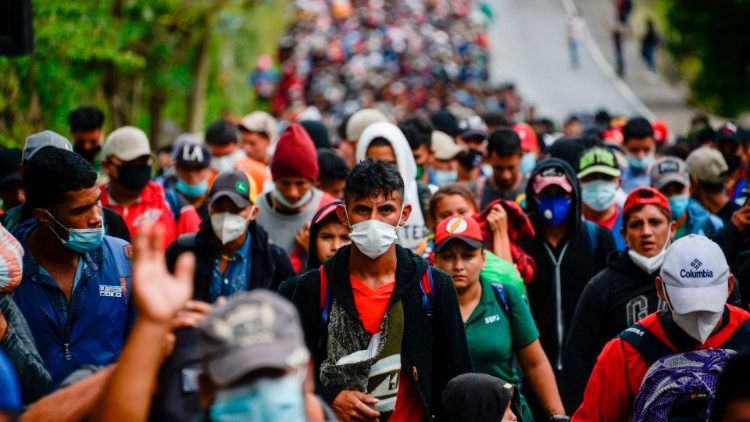 The Bishops of Central America encourage governments to protect the rights of thousands of Honduran citizens traveling in caravans toward the United States. Many of them encounter increasing threats to their lives and security, as well as serious humanitarian challenges due to shortages of healthcare, sanitation, food and shelter.

The Episcopal Secretariat for Central America (SEDAC) has called on political authorities to respect the human rights of Honduran migrants forced to flee their country due to the devastating effects of two hurricanes (Eta and Iota), unemployment and situations of violence amid the ongoing Covid-19 pandemic.

According to initial estimates, approximately nine thousand Hondurans have crossed the border into Guatemala. The mass displacement has, in some cases, led to tensions and clashes with police who have reportedly applied the use of tear gas to stop the flow of people.

“We recognize and respect the legitimate right to sovereignty of the countries involved in the transit of these migrants,” said SEDAC in the statement issued on Tuesday. However, “in the name of political charity promoted by Pope Francis, we ask that their human rights not be violated and that there be a deeply humanitarian attitude toward them regardless of their migratory status.”

“In the face of possible situations of violence,” continued the Bishops, “we urgently call upon the institutions that guarantee and oversee the fulfillment and respect of human rights and constitutional laws to remain on full alert and to constantly monitor them in order to defend people, especially women and children.”

Recognizing that the migration of the Honduran citizens does not affect only one country, SEDAC urged the governments of Mexico and the entire region to “work together, comprehensively and humanely on the regional migratory reality.”

“We urge the respective authorities to guarantee the safety of migrants who transit in their respective countries, preventing them from becoming victims of organized crime and common delinquency,” the Bishops appealed.

SEDAC further called on the relevant governments to respect family units as well as the migrants’ “right of access to the territory” and the “non-refoulment” of all persons who have a special need for international protection.

“Once again”, the Bishops added, “we remind you that the structural causes of migration must be addressed.”

In this regard, the Bishops called on the regional governments to “develop policies that effectively provide opportunities for everyone to improve their lives,” especially for young people to be able to study and for adults to be able to work in order to reduce the motivation to leave their country, putting their lives at risk, in search of better opportunities.

Humanitarian aid to those in need

Acknowledging the humanitarian efforts of individuals and Church organizations at the frontlines of providing aid to the migrants, the Bishops reiterated their support and gratitude for the help provided, reminding everyone that this is in line with the example of the Good Samaritan in the Bible.

Concluding the statement, the Bishops invoked the protection of the Virgin of Guadalupe on “all migrant brothers and sisters”, asking God to “bless all those who help them.”