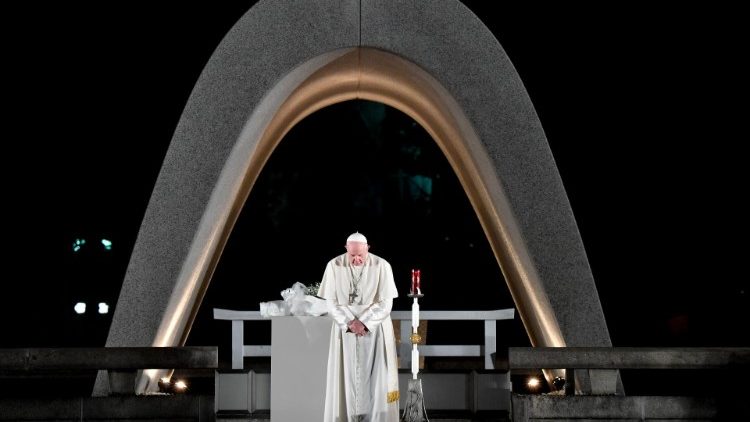 The Treaty on the Prohibition of Nuclear Weapons enters into force on Friday, 22 January. Pope Francis’ words at Hiroshima, which defined even the possession of nuclear weapons as immoral, is the latest act of a long magisterium spanning the twentieth century up to the present day.

There are two dates, in particular, that serve as an indelible reminder to humanity. On 6 and 9 August 1945, two atomic bombs were dropped in Japan. A few moments after the explosions, terrifying toxic clouds engulfed the cities of Hiroshima and Nagasaki, leaving innumerable victims and piles of rubble. Those harrowing scenes are and remain the tragic backdrop for the heartfelt appeals made by the Pontiffs in recent decades — words and prayers that point to a single, desired objective: nuclear disarmament. Pope Francis has renewed this exhortation, adding his own voice to that of his predecessors. After his apostolic trip to Japan in November 2019, on the flight from Tokyo to Rome, the Pope repeated that “the use of nuclear weapons is immoral.” For this reason, he added, “this must also be included in the Catechism of the Catholic Church.” Not only the use, but the possession of nuclear weapons is immoral, he said, “because an accident [due to] possession [of nuclear weapons], or the madness of some government leader, the madness of an individual, could destroy humanity.” Pope Francis repeated his call for global disarmament at his General Audience on 20 January 2021. Referring to the Treaty on the Prohibition of Nuclear Weapons, he explained that it is the “first legally binding international instrument explicitly prohibiting these weapons.”

Pius XII: only the cry of humanity will remain

It was a time violently shaken by the detonation of the atomic bomb: the Second World War revealed, before its conclusion, the tragic power that nuclear energy can achieve in the military sphere. The atomic bomb, as Pope Pius XII pointed out on 8 February 1948, is “the most terrible weapon that the human mind has ever conceived.”  On 24 December 1955, in his Christmas radio message to the world, Pope Pius forcefully described “the spectacle that would be presented to the horrified eye” after the use of nuclear weapons: “Entire cities, even the largest and richest in history and art, annihilated; a black blanket of death over the pulverised matter, covering countless victims with limbs burnt, twisted, scattered, while others groan in spasms of agony.”

John XXIII and the world on the brink of the abyss

On 25 October 1962, a few days after the opening of the Second Vatican Council, the world was on the brink of a third world war. Moscow and Washington seemed to be one step away from using the atomic bomb. From the microphones of Vatican Radio, Pope John XXIII made an appeal to avert the threat of conflict posed by the Cuban missile crisis: “With your hand on your conscience may each one hear the anguished cry which is raised to the skies from all parts of the earth, from the innocent children to the elderly, from the people of the communities: Peace, peace!” Consequently, Pope John points out in his 1963 encyclical letter Pacem in terris, “people are living in the grip of constant fear. They are afraid that at any moment the impending storm may break upon them with horrific violence.”

Paul VI: the nuclear threat is the most frightening one

The Nuclear Non-Proliferation Treaty was approved on 1 July 1968 — an encouraging moment, though not a decisive one. A few days earlier, on 24 June 1968, Paul VI reiterated the urgency of “putting an end to the nuclear arms race.” “We know that the Treaty, in the opinion of many, has many intrinsic limitations that keep some governments from giving it their unconditional adherence.” But, he added, “it is nonetheless an indispensable first step toward further measures in the field of disarmament.”

In an instant, the world and its fragile balance can be upset forever by atomic weapons. In 1980 Pope John Paul II, addressing UNESCO, noted that “geopolitical reasons, worldwide economic problems, terrible misunderstandings, wounded national egos, the materialism of our age, and the decline of moral values have led our world to a situation of instability, a fragile equilibrium…” One year later, on 25 February 1981, Pope John Paul observed, “Our future on this planet, exposed as it is to nuclear annihilation, depends upon one single factor: humanity must make a moral about-face.”

Benedict XVI: Peace is based on trust

The perspective of those governments that measure their strength and security on atomic weapons is “fallacious”… and “fatal.” Instead, the world must pursue the path of disarmament. Benedict XVI also stressed on multiple occasions that nuclear weapons affect the future of humanity. During his General Audience on 5 May 2010, he said, “Progress toward a collaborative and secure nuclear disarmament is closely connected with the full and rapid fulfilment of the relevant international commitments. Peace, in fact, rests on trust and on respect for assumed obligations, not only on the balance of power.”

Francis: the immorality of the use and possession of nuclear weapons

Following in the footsteps of his predecessors, Pope Francis has also repeatedly indicated the path of disarmament. During his Apostolic Journey to Japan, on the occasion of his Address at the Peace Memorial in Hiroshima on 24 November 2019, he emphasised, “The use of atomic energy for purposes of war is immoral, just as the possessing of nuclear weapons is immoral…” He then posed the question: “How can we speak of peace even as we build terrifying new weapons of war?” It is a question that even to this day, despite the tragic events in Hiroshima and Nagasaki, continues to challenge humanity and humanity’s conscience. It is as tragic as the image from a photo taken in 1945, which Francis had reproduced on a card: a 10-year-old boy carrying the body of his little brother who was killed in the atomic bomb explosion at Nagasaki.