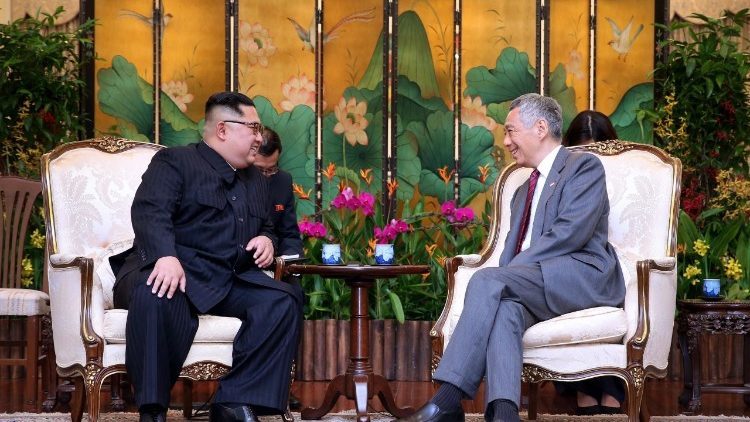 North Korean leader Kim Jong Un and US President Donald Trump arrived in Singapore on Sunday for a summit that’s the first of its kind.

A motorcade arrived at a hotel in Singapore, where North Korean leader Kim Jong Un was reported to be staying. A short distance away is the hotel chosen by the delegation of US President Donald Trump, who has called the summit a one-time shot.

President Trump said, “It’s unknown territory in the truest sense. But I really feel confident and I feel that Kim Jong Un wants to do something great for his people and he has that opportunity and he won’t have that opportunity again.”

Around Asia there is strong attention on this summit. In Japan, the Catholic Church regularly speaks out against nuclear weapons, pointing out that the people of the cities of Hiroshima and Nagasaki know more than anyone about the human cost of nuclear war.

In South Korea, the Catholic Bishops Conference of Korea says it believes God is giving Koreans the gift of peace. In a statement several weeks ago it said it hopes the U.S.-North Korean summit will transform the peninsula into a land of hope, and will build peace in Asia and worldwide.

And last week Archbishop William Goh of Singapore urged Catholics to pray for the summit’s outcomes, and for a world in which people have concern and charity for one another. “May nations learn to trust each other,” the Archbishop wrote.

#MeToo for every woman: victims of religious persecution speak out