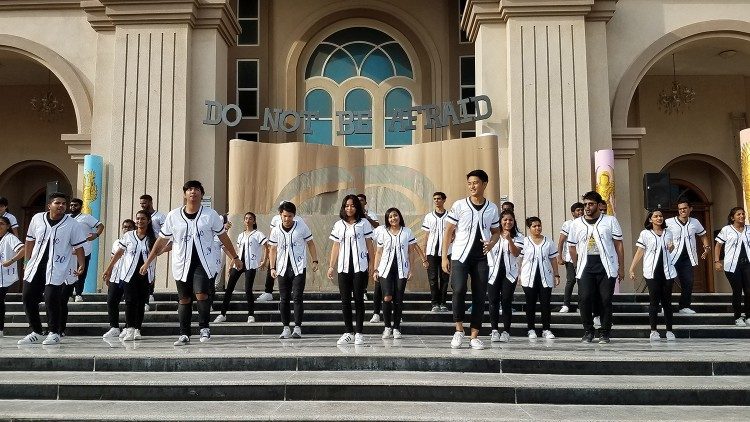 As the Synod of Bishops on Young People draws to a close on Sunday, 1,500 Catholic young people living on the Arabian Peninsula are attending the Arab Catholic Youth Congress (ACYC) in Ras Al Khaimah, United Arab Emirates (UAE), from 25-27 October. They have responded to the invitation to “Stand up, reignite your faith, hope and love and experience Jesus deeper”.

Bishop Paul Hinder, Vicar Apostolic for Southern Arabia and Yemen, said in an interview with Vatican News that the ACYC is an initiative proposed by young people. Their original idea was to organize something “to bring together the youth not only of one country, but of several countries in our region”. The bishops happily embraced their proposal, and the ACYC was born.

History of the ACYC

The ACYC is the largest Catholic youth event on the Arabian Peninsula. Young people are participating from the UAE, Oman, Saudi Arabia, Qatar, Bahrain, and Kuwait. The first ACYC was held in 2009 in Dubai with the theme “Put out into the deep”. “All things are possible for the one who believes”, was the theme of the follow up Congress in 2012 in Abu Dhabi in the UAE. This year’s theme is “Do not be afraid, Mary. You have found favor with God”

An international cast has been assembled to “animate” the attendees in various ways. It includes Archbishop Prowse from Canberra, Australia; Sr Anne Flanagan from the USA; Fr Wissam Mansour, a youth chaplain from Jordan; John Pridmore an ex-London gangster; Mark Nimo, originally from Ghana; and JC Libiran, Founder of Project Courage Zone in the Philippines.

Bishop Hinder hopes that the faith and hope of both the young people who attend and the bishops will be strengthened.

“The youth in our region don’t have such an easy life because of the whole situation, economically and with what’s going on in the world. So, I hope it will strengthen the faith of the youth. And, let’s say also for us the Bishops. We are also people of belief, and to be together with the youth is always something that gives us hope and new dynamic”.