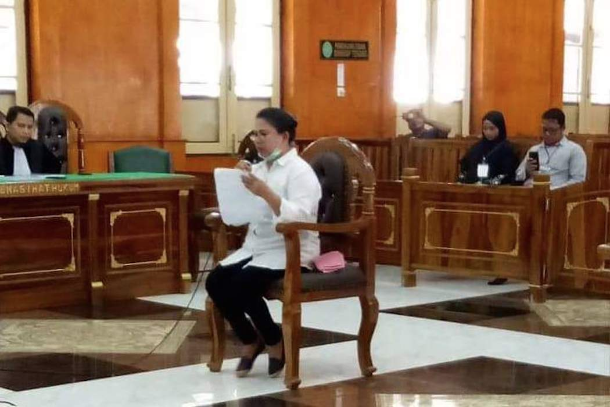 A woman jailed in Indonesia for 18 months for complaining about a mosque’s noisy loadspeakers will remain in prison after losing an appeal against her blasphemy conviction on Oct. 25.The High Court in Medan, North Sumatra province, upheld the lower court’s ruling against the 44-year-old Buddhist woman after her trial in August.Meliana, who is of Chinese descent and only goes by one name, was accused of blasphemy after she complained to the daughter of the caretaker of a nearby mosque that the five-times-a-day call to prayer was too loud.Local Muslims in her hometown of Tanjung Balai took her comments to mean she wanted the call to prayer stopped. Mobs later attacked her home and ransacked more than a dozen Buddhist temples.Ranto Sibarani, her lawyer, expressed disappointment at the High Court ruling and said Meliana, who was not in court to hear the ruling, would appeal to the Supreme Court. “We hope the Supreme Court will be fair courts,” he said.Activists say the case highlights how hard-line Muslim groups in Indonesia are using the country’s blasphemy law to crack down on religious minorities.However, Indonesia’s largest moderate Muslim organizations criticized Meliana’s imprisonment, saying her complaint was not blasphemy.Rumadi Ahmad, a Muslim scholar, said the call to prayer is not a fundamental part of religious teachings so should not be used as a basis for blasphemy accusations. It’s ridiculous to interpret a request to reduce the volume of a loudspeaker as insulting Islam, he said.Meanwhile, a call to free Meliana through an online petition on change.org continues to grow with more than 22,130 people having signed it