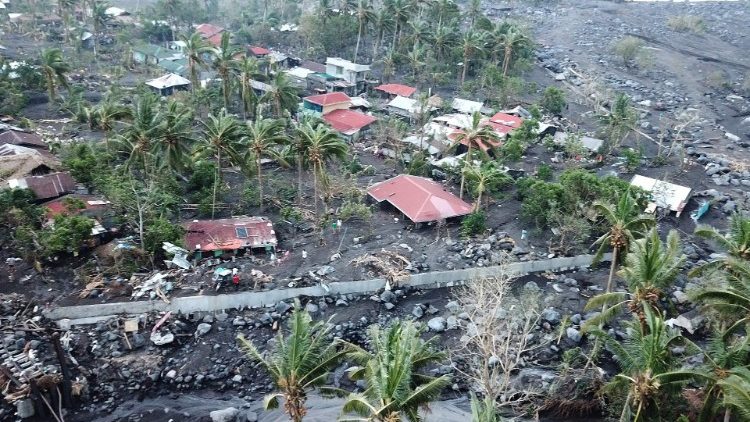 The national director of Caritas Philippines appeals for everyone’s “kindness, generosity and compassion” to help those hit by Typhoon Goni, the world’s most powerful tropical storm this year.

Caritas Philippines, the social and development arm of the Catholic Bishops’ Conference of the Philippines (CBCP) has launched a global appeal for aid to the victims of the world’s most powerful typhoon this year. Super Typhoon Goni, known as Rolly in the Philippines, battered the Bicol region in southern Luzon on November 1, causing most of the destruction in the eastern provinces of Catanduanes and Albay. At least 20 are dead and about 13,000 shanties and houses are damaged or swept away.

Bishop Jose Collin Bagaforo of Kidapawan, the national director of Caritas Philippines said the funds would initially help provide food, water and emergency shelter to people in worst-hit areas. The tropical cyclone with gusts of up to 310 kph, displaced more than 390,000 people from their homes, with about 347,000 still staying in evacuation centres.

“While we urge everyone to continue praying for safety, we also launch today our global appeal for help,” Bishop Bagaforo said in an earlier statement. “The typhoon will surely bring greater poverty to our communities severely affected by the typhoon, as they have also been battling against the effects of Covid-19. So with humility, we appeal for everyone’s sincere acts of kindness, generosity and compassion.”

Caritas national executive secretary, Father Tony Labiao stressed that “in these most trying times, we lift up everything to our God”. “We also know that everyone around the world will be able to listen to our prayers and send help,” he said.

Photos on social media of destroyed houses, toppled trees and debris show the situation in the Bicol region, with several villages submerged in floodwaters. More than 300 houses were also buried under volcanic mudflows in badly hit Albay province.

The Church’s rapid assessment teams have already been deployed, while volunteers and diocesan response teams continue to assist the evacuees in various parishes.

The Archdiocese of Manila has sanctioned an initial amount of over $20,600 to meet the urgent needs of the affected communities. Caritas Manila executive director Father Anton Pascual said that Caceres Archdiocese and the Dioceses of Virac, Daet, Gumaca, and Legazpi will receive a little over $4,000 each.

The damage from Typhoon Goni to the country’s agriculture sector is estimated at around $36 million. According to the Department of Agriculture’s (DA) Disaster Risk Reduction and Management Council (DRRM), 26,948 farmers are affected and 26,261 hectares have been damaged.

The Philippines is just recovering from Typhoon Molave that struck the nation in late October. Typhoon Goni is the 18th storm to hit the country this year. It evoked memories of Typhoon Haiyan of November 2013, which left more than 7,300 people dead or missing and displaced more than 5 million in the central Philippines. Yet another typhoon, Atsani, is brewing in the Philippine Sea and approaching the country.

According to the United Nations Office for the Coordination of Humanitarian Affairs (OCHA), around 68.6 million people are affected by Typhoon Goni, with 24.3 million living in the worst-hit areas. Of the 2.3 million vulnerable people living in the most affected areas, an estimated 724,000 are children.

OCHA fears the most affected children and their families are at risk of exposure to Covid-19 and other diseases due to crowding in evacuation centres. With the pandemic calling for the country’s financial and logistical resources, the typhoon relief efforts are strained.

US votes in Presidential Election

DRC: Over 20 civilians killed days after slaying of Italian…