US votes in Presidential Election 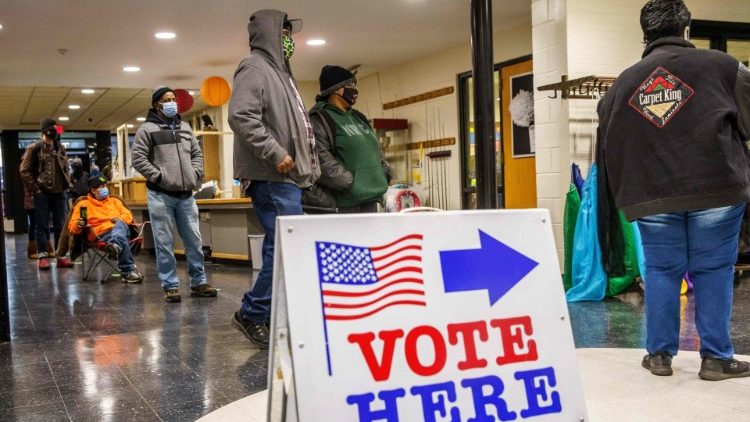 Voting gets underway in the United States to choose who will become the nation’s president for the next four years.

It’s decision day in the United States. Following a divisive US election campaign, Americans are going to the polls Tuesday to choose their next President.

Both Republican Donald Trump and Democratic candidate Joe Biden spent the last day before this ballot continuing to woo voters.

Trump did a whistle-stop tour of four states on Monday, while Presidential hopeful Joe Biden spent his last full day of campaigning in Ohio and Pennsylvania, telling voters that he was the man for the job.

Speaking to Americans late on Monday night in Grand Rapids, Michigan, Trump warned that his rival would move US jobs abroad. Biden, meanwhile, addressing supporters in Pittsburgh, said, “We’re done with the chaos, we’re done with the tweets, the anger, the hate, the failure, the irresponsibility.”

Both men have rallied supporters, taken part in televised debates, and used social media to get their message across.

Fr Mike Russo is an Emmy Award-winning producer and former professor of Communications Studies at Saint Mary’s College of California. Speaking to Vatican Radio, he said the current president has used social media to his advantage and maybe “we’re not used to that kind of Chief Executive.”

Fr Russo added that even if Donald Trump ends up being a one-term president, “I think there will be copy cats following him afterwards, able to get into high office and continue that kind of day-to-day social media, I would call it combat, where everyone is susceptible to being brought down by a Tweet.”Listen to the interview

This has been a campaign dominated by a number of key issues. Topping that list is the COVID-19 pandemic that has killed more than 231,000 people in the United States and left millions unemployed. The country has also been rocked by protests over racial injustice against Black Americans and other minorities.

Noting that the US at present is facing challenging times, Fr Russo said moral leadership is something we need at all times.

In anticipation of possible protests several cities, such as New York and Washington, have begun boarding up buildings.

Voters have already cast their ballots early in record-breaking numbers in this election –  more than 99 million, in fact, either in person or by mail.

Both candidates have focused their attention on twelve key states, nearly all states that President Trump won in 2016. They include Pennsylvania, Michigan and Wisconsin.

In order to win the White House, 270 electoral votes are required. Joe Biden has held a steady lead in the popular vote in national polls. But Donald Trump is close in enough swing states to possibly amass the 270 state-by-state Electoral College votes needed to hold on to the presidency.

Cardinal Schönborn on Vienna attack: nothing can justify blind violence