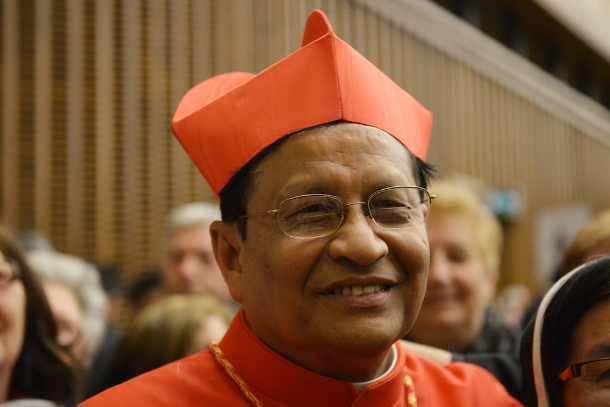 Cardinal Charles Maung Bo of Yangon has appealed to the international community to understand Myanmar’s delicate situation and continue to help its transition to a federal democratic union.He said peacemaking is its urgent mandate, while democracy has yet to be robust as it is still in its infancy.”In the hands of Aung San Suu Kyi, the people of Myanmar invest their hope for a country of peace and prosperity,” Bo said in a statement on Sept. 10. “Myanmar history is a wounded history. It is time to heal, not to open new wounds.”His appeal comes as Myanmar is facing harsh criticism after a U.N. fact-finding mission found the military had committed gross human rights abuses in Rakhine, Kachin and Shan states.”Extreme terms like genocide, ethnic cleansing and sanctions will not assist us in our journey towards peace and democracy,” Cardinal Bo said. “The way forward is to accept the role of all stakeholders in the durable peace and resolution of all issues.”The 69-year-old cardinal said the civilian government and the army need to work together to make this country “a nation of hope for millions.” “I earnestly request all our friends to recognize this reality and help the people of Myanmar in resolving their problems,” he said.He concluded his message that “Myanmar is a nation of promise. Let all of us help to fulfil that promise.”Cardinal Bo is known as a staunch campaigner for reconciliation in Myanmar, where peace negotiations with ethnic armed militias are ongoing and the Rohingya refugee crisis is still being settled.He has defended State Counselor Aung San Suu Kyi in her efforts to foster democracy by working with the military despite calls for her to be stripped of her Nobel peace prize for staying silent about persecution of the Rohingya.

ST. OF THE DAY

Pope Francis to meet with US Bishops