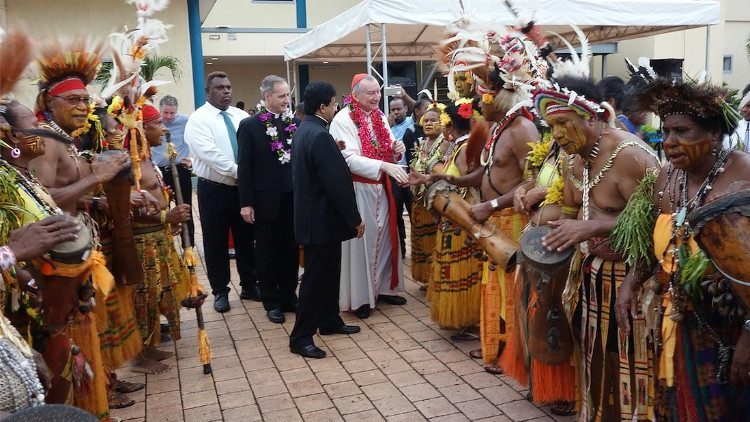 Vatican Secretary of State, Cardinal Pietro Parolin has challenged the Catholic Church Oceania to identify and promote true alternatives to harmful modes of life prevalent in societies throughout the vast region that harm both man and his environment.

Cardinal Parolin made the exhortation on April 11 in Port Moresby, the capital of Papua New Guinea (PNG), where he arrived that day to attend the assembly of the Federation of the Catholic Bishops Conferences of Oceania (FCBCO).

Some 75 representatives of the federation that comprises the 4 bishops conferences of Australia, New Zealand, the Pacific Islands, Papua New Guinea and the Solomon Islands are assembled in Port Moresby from April 11 to 18 on the theme, “Care of our Common Home of Oceania: A sea of possibilities”.

In his keynote address at the opening of the FCBCO conference on Wednesday, Cardinal Parolin shared his reflections on the “Laudato Si,” the second encyclical of Pope Francis, which addressed the obligations of “man” to each other and the environment.

He noted that “ideology has a great impact on our approach to questions of ecology and the environment.”   He pointed out that the “mental ideology that can lead us to theses damaging consequences that the Pope mentioned in “Laudato Si” is the ideology of individualism.”  This ideology whose origins can be traced back to the Age of Enlightenment, he explained, encourages separation from one another and from the community and brings us towards other means of individual and independent living.

Despite the rain, over 300 people, religious and lay faithful accompanied by Church leaders, accorded the cardinal a colourful ceremonial welcome at Port Moresby’s Jackson International Airport.  Gifts of betel-nut, and a live chicken were presented to him by Papuan dancers.

“I come as Secretary of State of His Holiness Pope Francis and I know that your welcome is also a sign of your affection for him,” said Cardinal Parolin, moved by their warmth.  “The Holy Father asked me to assure you of his closeness and his prayers for your country. Let us hope we can share in these days a good experience of the love of God,” he said.

Cardinal Parolin said he wanted to come to PNG because of growing concerns about a nuclear and weapons-free world which, he said, come with responsibility to protect and improve people’s lives across the globe.

Fr. Victor Roche, Secretary of the Catholic Bishop Conference of Papua New Guinea explained to the Vatican’s Fides news agency that participants in the FCBCO will study the environmental and social challenges they are facing and try find concrete solutions to the needs of their regions and the communities they represent.

The Bishops of these remote countries are concerned about environmental issues, such as the care of the ocean ecosystem, and the protection of human rights and the environment, threatened by an economy of intense exploitation of this vast geographical area.

The issues that are worrying this corner of the globe are not exclusively linked to the care of the environment: issues such as migration and the hospitality of refugees push the Bishops of countries like Australia and Papua New Guinea in search of solutions that foster integration and reception, respecting the human dignity of all.