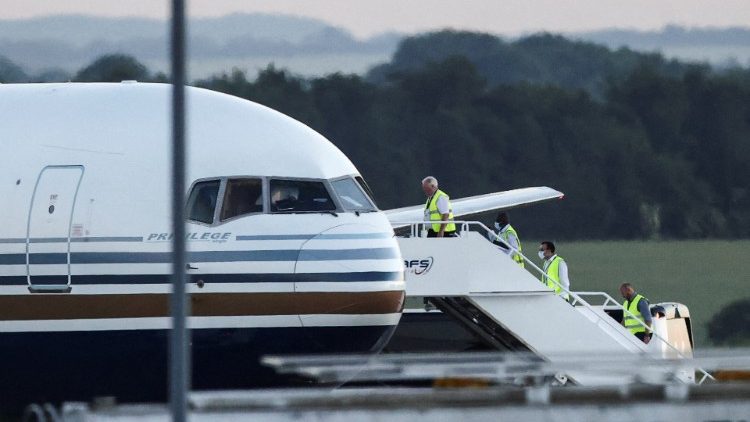 Bishops of England and Wales reiterate their concerns over the controversial UK government plan to send asylum-seekers to Rwanda, saying the scheme will increase the difficulties of those hoping for a new beginning and that human dignity must be protected and upheld.

As the British government reiterates its determination to continue with its controversial scheme to deport asylum-seekers to Rwanda, despite wide opposition and legal challenges by advocacy groups, the Catholic Bishops Conference of England and Wales (CBCEW) has once again voiced its criticism of the plan alongside the Church of England, terming it as “shameful”.

We are responsible for our brothers and sisters

“The UK’s plans to forcibly deport to Rwanda some of those seeking refuge in our country is shamefully illustrative of what Pope Francis has called the ‘loss of that sense of responsibility for our brothers and sisters’ on which every civil society is based’, said Bishop Paul McAleenan,  Lead Bishop for Migration Issues of the CBCEW.

Following the green light given by the British High Court last week, the first flight with 31 illegal immigrants on board was due to leave on Tuesday but was stopped the last moment, after an intervention by the European Court of Human Rights (ECHR).

Crime is defeated not by punishing victims

Prime Minister Boris Johnson had announced the deal with the east African country in April this year, arguing that the programme was aimed at stemming people-smuggling networks and deterring migrants from making the dangerous sea journey across the Channel from France to England with makeshift boats or dinghies.

However, Bishop McAleenan refutes this argument: “Crime is defeated by confronting the perpetrators not by punishing victims”, he said.

“This scheme will increase the difficulties of those hoping for a new beginning, and it does nothing to address the problems which cause people to flee their homes.”

Illegal immigrants increasing in the UK

The number of illegal migrants landing on British shores on small boats has grown dramatically in the past two years. According to data from the UK Home office, in 2021 alone, 28,526 people arrived in the United Kingdom this way. Nearly two-thirds of them came from just four countries: Iran (7,874), Iraq (5,414), Eritrea (2,829) and Syria (2,260).

Numbers have further increased this year, with 4,540 people arriving in the first three months of this year, more than three times higher than the same period in 2021, many from Afghanistan,  following the Taliban takeover in August 2021.

Almost all of the people who come on small boats have applied for asylum.

The UK has said it will pay Rwanda £120 million over the next five years to finance the programme. The British Government has also promised to pay for the processing and integration costs for each relocated person, covering the cost of accommodation, food, healthcare, social assistance and legal advice.

Criticism  from the Church of England

Despite the government’s attempts to justify the scheme, criticism of the plan has continued to grow, including that from leaders of the Church of England who, in a joint letter to The Times last week, said it is an “immoral policy that shames Britain”. “We cannot offer asylum to everyone, but we must not outsource our ethical responsibilities, or discard international law – which protects the right to claim asylum”,  they wrote.

Asylum seekers are not commodities

These words are echoed in Bishop McAleenan’s statement: “Migration is a complex issue, but it is not resolved by delegating our roles and responsibilities to other countries. Our starting point should be the innate dignity of every person, created in the image and likeness of God”.

He, therefore, reiterated the call for a change of approach on migration policies: “With greater force we insist that asylum seekers are not commodities for profit, nor are they problems to be rejected and deported by government. Instead, we should be guided by the four verbs provided by Pope Francis in our approach to migrants and refugees, ‘Welcome, protect, promote and integrate’”,  the Lead Bishop for Migration concluded.

Pope: Remember those suffering in Ukraine and pray for them