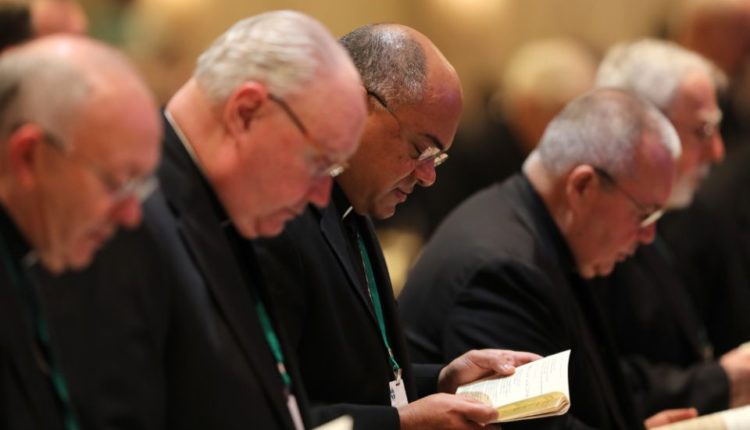 BALTIMORE — The U.S. bishops took the first steps toward approving a pastoral letter against racism with the document’s introduction Nov. 13 during their annual fall general meeting.

The proposed pastoral letter, “The Enduring Call to Love: A Pastoral Letter Against Racism,” has been in the works for four years, although its issuance was put on the front burner following the September 2017 “Unite the Right” rally in Charlottesville, Virginia.

Archbishop Gustavo García-Siller of San Antonio, chair of the U.S. bishops’ Committee on Cultural Diversity in the Church, said all standing committees of the U.S. Conference of Catholic Bishops collaborated on the document.

” ‘Open Wide our Hearts’ conveys the bishops’ grave concern about the rise of racist attitudes in society,” said Bishop Sheldon Fabre of Houma-Thibodaux, Louisiana, chairman of the bishops’ conference’s Subcommittee on African American Affairs. He also chairs the Ad Hoc Committee Against Racism.

“Despite many promising strides made in our country, the ugly cancer of racism still infects our nation,” the proposed pastoral says. “Racist acts are sinful because they violate justice. They reveal a failure to acknowledge the human dignity of the persons offended, to recognize them as the neighbors Christ calls us to love,” it adds.

“Every racist act — every such comment, every joke, every disparaging look as a reaction to the color of skin, ethnicity or place of origin — is a failure to acknowledge another person as a brother or sister, created in the image of God,” it adds.

“Racial profiling frequently targets Hispanics for selective immigration enforcement practices and African-Americans for suspected criminal activity. There is also the growing fear and harassment of persons from majority-Muslim countries. Extreme nationalist ideologies are feeding the American public discourse with xenophobic rhetoric that instigates fear against foreigners, immigrants and refugees.”

“Personal sin is freely chosen,” a notion that would seem to include racism, said retired Bishop Ricardo Ramírez of Las Cruces, New Mexico, but “social sin is collective blindness. There is sin as deed and sin as illness. It’s a pervasive illness that runs through a culture.” Fabre responded that the proposed letter refers to institutional and structural racism.

Bishop Curtis Guillory of Beaumont, Texas, said the proposed pastoral “gives us a wonderful opportunity to educate, to convert,” adding that, given recent incidents, the document should give “consideration to our Jewish brothers and sisters.” Fabre said that while anti-Semitism is mentioned in the document, future materials will focus on anti-Semitism.

The rollout of the proposed pastoral was the chief concern of Bishop Christopher Coyne of Burlington, Vermont. “We do this great work,” he said, and it should be shaped to fit “multiple formats,” including short videos, digital media, religious education and adult education. Although “we’re getting better at it,” he added, all too often “we do these documents, and they sit on a shelf.”

Fabre allayed his concerns. “We do have lesson plans ready to go, from kindergarten to high school,” he said, “ready, just waiting for the pastoral letter to be approved.”

A vote to approve the document was scheduled for Nov. 14, the last day of the public sessions of the bishops’ meeting.

Notification of decree of excommunication