Bishop Kukah: Our hypocrisy and duplicity have caught up with us 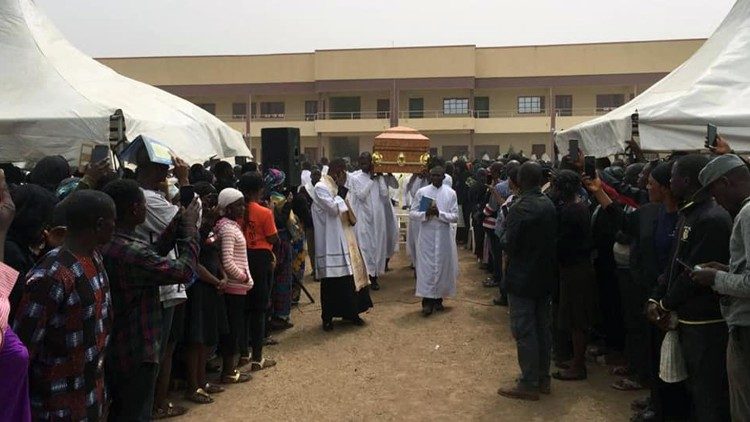 The death of a seminarian in Nigeria has laid bare some of the fault lines beneath the surface of Nigerian society. Bishop Matthew Hassan Kukah, of the Diocese of Sokoto, in Northern Nigeria, has led thousands of mourners at the burial of a seminarian, Michael Nnadi.

“We have gathered around the remains of Michael in supplication but also as solemn witnesses to the penetrating darkness that hovers over our country,” Bishop Kukah told mourners.

Bishop Kukah was speaking, in Kaduna, Tuesday at the funeral of 18-year-old Nigerian seminarian, Michael Nnadi who was kidnapped along with three other seminarians on the night of 8 January. Gunmen attacked the Good Shepherd Seminary in Kakau, Kaduna state. While three others were later released, Michael was separated from the others and murdered. A Kaduna-based doctor’s wife was also killed by the kidnapping gang.

Our hypocrisy and duplicity have caught up with us

The homily was a blistering and scorching indictment of President Muhammadu Buhari’s Government and Nigeria’s governing elite.

“Our nation is like a ship stranded on the high seas, rudderless and with broken navigational aids. Today, our years of hypocrisy, duplicity, fabricated integrity, false piety, empty morality, fraud and Pharisaism have caught up with us. Nigeria is on the crossroads, and its future hangs precariously in a balance,” Bishop Kukah said in a homily.

“This President has displayed the greatest degree of insensitivity in managing our country’s rich diversity. He has subordinated the larger interests of the country to the hegemonic interests of his co-religionists and clansmen and women. The impression created now is that, to hold a key and strategic position in Nigeria today, it is more important to be a northern Muslim than a Nigerian,” Bishop Kukah said.

The Bishop then continued, “Nigeria needs to pause for a moment and think. No one more than the President of Nigeria, Major General Muhammadu Buhari who was voted for in 2015 on the grounds of his own promises to rout Boko Haram and place the country on an even keel. In an address at the prestigious Policy Think Tank, Chatham House, in London, just before the elections, Major General Buhari told his audience: “I, as a retired General and a former Head of State have always known about our soldiers …If am elected President; the world will have no reason to worry about Nigeria… We will be tough on terrorism and tough on its root causes by initiating a comprehensive economic development and promoting infrastructural development…we will always act on time and not allow problems to irresponsibly fester. And I, Muhammadu Buhari, will always lead from the front,” Bishop Kukah reminisced.

Northern Nigeria is not any better-off

Bishop Kukah also asserted that neither “Islam nor the north can identify any real benefits … Despite running the most nepotistic and narcissistic government in known history, there are no answers to the millions of young children on the streets in northern Nigeria, and the north still has the worst indices of poverty, insecurity, stunting, squalor and destitution. His Eminence, the Sultan of Sokoto, and the Emir of Kano are the two most powerful traditional and moral leaders in Islam today. None of them is happy, and they have said so loud and clear,” affirmed Bishop Kukah.

Persecutions of Christians in Nigeria is not new

Bishop Kukah reminded the faithful: “The persecution of Christians in northern Nigeria is as old as the modern Nigerian state…By denying Christians lands for places of worship across most of the northern states, ignoring the systematic destruction of Churches all these years, denying Christians adequate recruitment, representation and promotions in the State civil services, denying their indigenous children scholarships, marrying Christian women or converting Christians while threatening Muslim women and prospective converts with death, they make building a harmonious community impossible. Nation-building cannot happen without adequate representation and a deliberate effort at creating for all members a sense, a feeling, of belonging, and freedom to make their contributions,” he said.

“Today, we are living with a Senate whose entire leadership is in the hands of Muslims. Christians have continued to support them. For how long shall we continue on this road with different ambitions? Christians must rise and defend their faith with all the moral weapons they have. We must become more robust in presenting the values of Christianity, especially our message of love and non-violence to a violent society,” the prelate of Sokoto asserted.

Bishop Kukah especially called on Christians in Nigeria not to sustain nor give their support to selfish northern politicians.

“We are being told that this situation has nothing to do with Religion. Really? It is what happens when politicians use religion to extend the frontiers of their ambition and power. Are we to believe that simply because Boko Haram kills Muslims too, they wear no religious garb? Are we to deny the evidence before us, of kidnappers separating Muslims from infidels or compelling Christians to convert or die? If your son steals from me, do you solve the problem by saying he also steals from you?” wondered Bishop Kukah.

A message of hope

Yet the Bishop’s homily was also full of hope for Nigeria and for the mourning Christians.

“There is hope, my dear friends. Are we angry? Yes, we are. Are we sad? Of course, we are. Are we tempted to vengeance? Indeed, we are. Do we feel betrayed? You bet. Do we know what to do? Definitely. Do we know when to do it? Why not? Do we know how? Absolutely. Are we in a war? Yes. But what would Christ have us do? The only way He has pointed out to us is the non-violent way. It is the road less travelled, but it is the only way,” the Bishop consoled the mourners.

Bishop Kukah further wondered what message God had for the country when he chooses Nigerian teenagers such Leah Sharibu and Michael Nnadi to confront evil and became martyrs.

He concluded, “We are honoured that our son has been summoned to receive the crown of martyrdom at the infancy of his journey to the priesthood. We are grateful that even before he could ascend the earthly altar, Jesus, the high priest, called Him to stand by His angels. He was a priest by desire, but he is concelebrating the fullness of the priesthood beside His Master.”

Michael was buried at the cemetry of Good Shepherd Seminary in Kaduna.