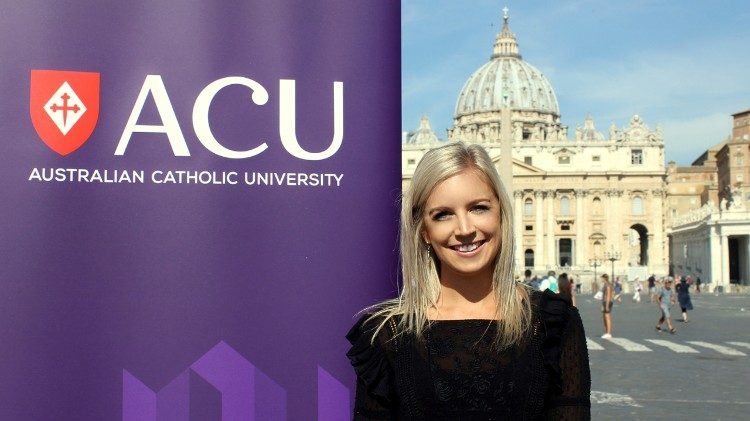 Scores of foreign students flock to Rome every year to participate in different scholarship programmes in order to further their studies and experience life in the eternal city.

So what’s special about Kate Gavin, a young Australian Nursing Student, hosted by the Australian Embassy to the Holy See, and spending some precious time at the Australian Catholic University Rome Campus?

What’s special – apart from Kate’s personal talents and ambitions – is the fact that she is the recipient of a very special scholarship indeed: the Frances Xavier Conaci scholarship that is unique in that it specifically enables an Australian Aboriginal or Torres Strait Islander student to take advantage of such an opportunity to support development and plant seeds for a future of justice and equality.

And not only does Kate’s Aboriginal heritage make her an ideal role model in the empowerment of Indigenous communities all over the world, the fact that she is a woman is also significant as it provides her with a platform to honour Indigenous women and actively advocate for social change.

Linda Bordoni met Kate at the Australian Embassy to the Holy See at the beginning of her scholarship programme and spoke to her and to Ambassador Melissa Hitchman about the wounds of the past and about hopes for the future.

Kate Gavin, the second Conaci scholar to come to Rome, is in her 3rd year of nursing and wants to work in pediatrics and then perhaps in midwifery.

Speaking about her heritage she explained that her grandfather was part of the Stolen Generation, taken from his mother when he was tiny and raised in an orphanage called “Sister Kate”.

“Thankfully the person who raised him was a kind and loving person -that’s why my name is Kate” she said.

Between 1910-1970, many Indigenous children were forcibly removed from their families as a result of various government policies. The generations of children removed under these policies became known as the Stolen Generations. The policies of child removal left a legacy of trauma and loss that continues to affect Indigenous communities, families and individuals.

“It was when the early settlers came into Australia and took the non-full-blood aboriginals and raised them to be white – to breed out race” she explained.

Kate’s grandfather, she said, managed reconnect with his own mother and sister and the family still nurtures intense family memories and ties.

Kate expressed gratitude for the efforts the Australian Government has been making and continues to make to heal the wounds of the past, starting with the National Apology pronounced by the then Prime Minister Kevin Rudd, and continuing to support the “Close the Gap” organization that works mostly in health and education.

She said that although she personally does not nurture feelings of anger or resentment, she thinks that particularly in some of the more rural areas of the country perhaps there is still a lack of trust and it will take time still to heal the wounds: “it’s not going to happen overnight”.

Australian Embassy to the Holy See

Melissa Hitchman is the Australian Ambassador to the Holy See and she is in the forefront working with the Australian Catholic University to make the scholarship happen thanks also to the support of the government.

She explained that Francis Xavier Conaci, after whom the scholarship is named, was a young Aboriginal man who travelled from New Norcia, in Western Australia in 1849 together with a Benedictine monk.

“He came to Rome, met Pope Pius IX, was robed in his Benedictine robes and studied here and unfortunately fell sick and died and is buried in the Basilica of St. Paul’s Outside the Walls” she said.

Hitchman explained that this scholarship is part of an effort on the part of the Australian Embassy to the Holy See and the Australian Catholic University to pick up his legacy and continue where he left off.

“It’s a life cut short and an opportunity for Australia to honour his memory and for students to come here and study in Rome and continue to build on that legacy” she said.

The Ambassador explained that it is also an opportunity for the Embassy to collaborate with various institutions and people such as the Basilica of St. Paul’s Outside the Walls and theBenedictine Abbey, as well as with the Abbey of New Norcia in Australia as well.

She said one aim of the scholarship is to give the student a sense of the Universal Church while being here in Rome at the center of Catholicism, while fostering the collaboration between the Church, the State and Australian Indigenous Communities: “a collaboration which was strong from the beginning and continues to be strong”.

“Conaci was an indigenous youth, he was supported by his family but also by the Church to come here – it could see his potential as a leader to his own community within his Christian faith” she said.

He provides, she said, a model of inspiration for the young people who come to Rome.

Hitchman noted that Kate Gavin’s family heritage is from western Australia as was Xavier Conaci, and this experience gives her the chance to see the Church/State/Indigenous collaboration up close: “here is a scholarship funded by a Catholic Institution, supported by the government in recognition of Australian indigenous contribution”.

The legacy of the past to build on the future

She also highlighted the fact that the Holy See has been very supportive of First Peoples of indigenous culture: “it’s been one of the greatest proponents worldwide of that and we are proud to be associated yet again with another indigenous contribution to the bilateral relationship.”