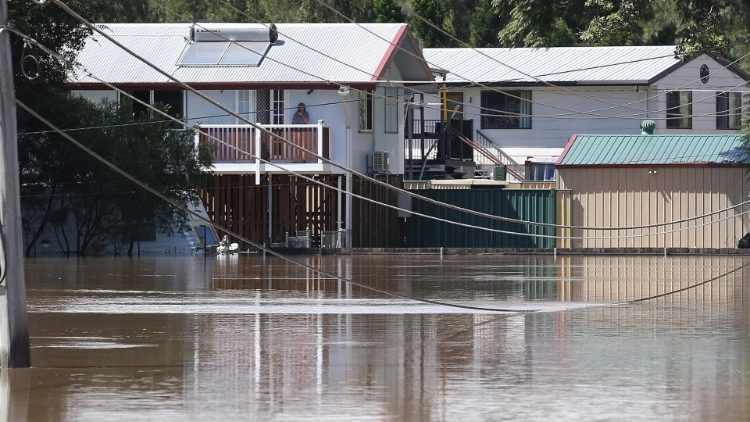 Several churches, homes, businesses in Brisbane and the surrounding communities are underwater as heavy rains swamp the area killing eight people and affecting an estimated 15,000 properties.

Many parts of Australia’s third-most populous city, Brisbane, were under water on Monday after three days of torrential rains caused floodwaters to engulf several areas across the city.

Authorities estimate that about 15,000 properties could be affected as the Brisbane River likely reached its peak, with the overflow inundating low-lying areas. Several residents have been forced to evacuate, schools and churches closed, and millions of people to work from home.

Eight people have reportedly died in the floods since last week, with several others missing.

The flooding, which affected communities in Queensland and in Northern New South Wales is the worst since 2011 when weeks of heavy rains flooded Queensland and created a disaster that affected over 200,000 people

Images posted online also showed the campuses of some colleges inundated by floodwaters, with 980 schools shut in the area on Monday.

Australian Catholic University which was set to welcome students back for the first day of the academic calendar had to redirect the students to online learning due to the flooding.

Similarly, South Brisbane ministries, including a shelter for Brisbane’s homeless and vulnerable people have been forced to close its doors because of the catastrophic floods, as staff were unable to make their way to the shelter.

Meanwhile, St. Stephen’s Cathedral in Brisbane was forced to run a limited Mass schedule on Sunday due to the floods.

Queensland emergency services have been on the frontlines trying to do the best they can for people who are in need of help and have rescued several dozens of people, with searches still underway.

More than 50,000 homes across the south-east were without power on Monday and disaster assistance has been activated in several Queensland councils.

Reports say that the rains have largely stopped in Queensland but river, creek, and brook levels will remain high for days, and major flood warnings remain for several areas.

Bishop of Plymouth: Use armour of prayer, fasting for Ukraine this Lent