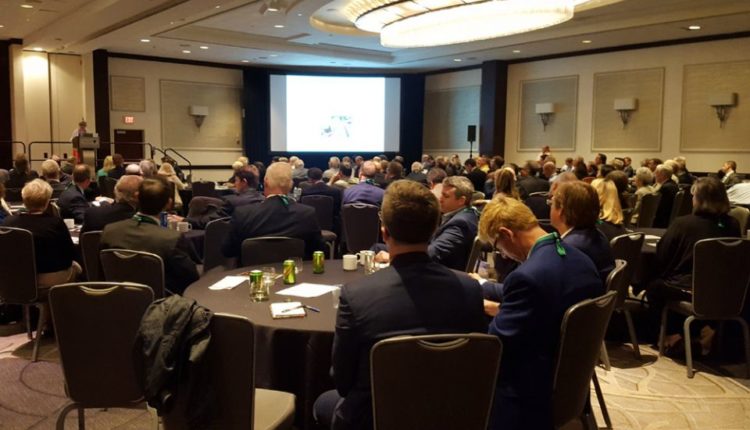 While some called for changes in canon law to allow more lay oversight in church governance, others admitted that was unlikely and instead urged attendees — many of them wealthy donors — to use their moral authority as baptized Catholics to effect change by withholding donations and pressuring bishops to demand an independent Vatican investigation of the U.S. church.

“We can’t wait around for the leadership of our church to kick this can down the road, hoping we’ll forget about it,” said Timothy Busch, the millionaire businessman who co-founded the Napa Institute, sponsor of the “Authentic Reform” event in Washington, D.C.

“We’re not going to forget about it,” he said. “We’re going to bring them to justice, move them out and restore our church to holiness.”

Known for its annual conferences in California wine country, the Napa Institute blends conservative theology and libertarian economics, with an emphasis on apologetics, sexual ethics and countercultural anti-secularization. All were on display at “Authentic Reform,” with a lineup of big-name conservative Catholic speakers and guests.

The conference, held Oct. 1-2, attracted more than 250 attendees, nearly all of them conservative Catholics. Some were concerned people in the pews, others were wealthy Catholics connected to Napa or related organizations, while still others were ministry leaders looking to network with donors.

“It needs to stop. And, we, the laity, are going to stop it. And we’re going to do it regardless of what the civil and canon law says.”
—Timothy Busch

In his opening remarks, Busch noted that he had worked on the Papal Foundation with former Cardinal Theodore McCarrick — now accused of sexual misconduct with seminarians and sexual abuse of at least one child.

“I didn’t really know what was going on,” Busch said of McCarrick, calling the allegations against the former archbishop of Washington “appalling” and “very scary.”

“It needs to stop. And, we, the laity, are going to stop it. And we’re going to do it regardless of what the civil and canon law says,” Busch said.

“If we don’t tolerate this in our own businesses, we can’t tolerate it in our church,” Busch said, adding that he will have respect for priests and bishops “to the extent they are compliant with normal business acumen and behavior.”

Although the “monarchal church” is the keeper of the magisterium, those church leaders are not as “nimble” as lay leaders, Busch said, describing Napa as “not rogue” but also not “within the bureaucratic church.”

A bishops’ panel featured Bishop Robert Morlino of Madison, Wisconsin; Archbishop Samuel Aquila of Denver, and Cardinal Gerhard Müller of Germany, the controversial former prefect of the Congregation for the Doctrine of the Faith. The three were introduced as “the new papal posse.”

During that panel, Morlino expressed concern about the newly formed Better Church Governance Group, which plans a “Red Hat Report” after investigating and auditing each of the cardinal electors before the next conclave. Morlino later told NCR he had spoken “off the cuff” and had only general concerns about “non-canonical” groups.

Related: ‘Red Hat Report’ to ‘audit’ cardinals, ahead of next conclave

“Authentic Reform” was free to those attending Napa’s annual three-day “Principled Entrepreneurship” conference, co-hosted with the business school at The Catholic University of America that bears Busch’s name. Otherwise, the registration fee was $500.

Gray called the “summer of Catholic humiliation” — not only revelations about McCarrick, but the Pennsylvania grand jury report and the accusations of Vatican cover-up by Archbishop Carlo Maria Viganò — a “crisis of faith.”

“We have a responsibility not simply to complain about the failures of the church, but to fix them,” Gray said at the opening reception, noting that “righteous anger” was an appropriate response and the lack of anger from “our shepherds” was disconcerting.

“Righteous anger is in proportion to your love,” Gray said, clarifying that the group was not attacking the church but offering a “critique in love.”

Gray emphasized the importance of constructive solutions, calling Napa not only a think-tank but a “do-tank.”

Among the practical suggestions that came from small-group discussions were “messaging to bishops,” redirecting financial contributions to the poor until desired changes happen, and encouraging “fraternal correction,” in which clergy and bishops urge their brethren who are sexually active — whether homosexual or heterosexual — to return to chastity or leave the priesthood.

“I have been floored, just astounded, at how reticent the vast majority of our bishops and clergy are to confront one another about their dangerous words and actions,” said Patrick Lencioni, author of several best-selling business books and co-founder of Amazing Parish, which provides leadership consulting for parishes.

He noted that when he works with secular organizations, such as Chick-fil-A, he sees the effectiveness of fraternal correction of an employee or even a boss. The church, he said, “is far more important than a chicken sandwich.”

Lencioni and Gray also presented a list of 10 lay apostolates — all of them part of the “new evangelization” — that they believe should band together for greater effectiveness in pursuing reform.

Several speakers acknowledged that church leaders had done a good job of addressing sexual abuse of minors with the 2002 Dallas charter and norms, and thought reform was now needed to address sexual misconduct with adults. Concern about homosexual activity was key, with an entire session devoted to “The Problem of Homosexuality.”

In that presentation, Janet Smith, who has taken a leave of absence as a professor at Sacred Heart Major Seminary in Detroit to address the scandal, estimated, using various sources of varying credibility, that 5 to 60 percent of priests break their vows of celibacy and that approximately 30 percent of bishops are “active homosexuals.” She also referred to “gay priest Harvey Weinsteins” who prey on other men.

“Almost every bishop has been complacent in some way. They’ve looked the other way,” she said of what she calls “the elephant in the diocese”: a network of active homosexual priests who protect each other, advance each other and control what happens in a diocese.

Smith, who admitted she was “obsessed” with the current scandal, proposed two plans of action: either diocesan audits conducted by laypeople assisting the bishops, or lay advocates, who would work with victims.

Smith also recommended that sexually active priests leave the priesthood, but suggested that dioceses could help them with education or job training. She acknowledged that it would mean, at least initially, fewer priests.

“You’re going to have to have Mass in a stadium a couple times a week for everybody: I say do it, myself” she said to applause. “They will have many tough years, but then there will be an influx of fantastic young men.”

Gray also praised the “new generation of good priests,” who often come from homeschooling families that “teach the truth.”

A suggestion that Smith give her presentation to the U.S. bishops at their November meeting received applause.

Yet, despite promises of “return on investment” and an emphasis on solutions, much of the daylong event focused on personal holiness and the need for universal penance on the part of Catholics, with nearly every speaker noting that “we are all sinners.”

But some attendees responded negatively to calls for universal atonement. “I don’t want bishops apologizing for me, I want them apologizing to me,” said one participant.

While Gray called for an emphasis on reparation, perhaps during Lent, Lencioni noted that public acts of atonement by bishops “felt like a smokescreen” to him.

In a provocative homily at the conference’s opening Mass, Morlino called for a “zealous hatred of evil” to take hold in the church.

“There is too much talk of love in the church and too little hatred of evil,” he said. “The current scandal in which we find ourselves is the result of weakness of the hatred of evil.”

Noting the connection between hatred of evil and fear of the Lord, the bishop explained that hating the sin is a way to love the sinner. “It is an act of love to hate sin and an act of mercy to admonish the sinner to turn away from sin.”

Gray also noted that “mercy to the wolves is cruelty to the sheep.”

But former U.S. Sen. Rick Santorum from Pennsylvania, who attended the opening reception the evening of Oct. 1, cautioned against being perceived as “hateful,” which he said was “a killer of our movement.”

“One of the key elements of those who will oppose us is to try to portray you as judgmental haters,” Santorum said, noting that the “other side,” especially the media and those outside the church, will push back hard against this reform movement.

“What will make a difference in this movement is not how much we hate evil … but in how much we show in everything we do how much we love,” he said.

Although there were no direct or personal attacks on Pope Francis, a question from a representative of LifeSiteNews, a right-wing advocacy website, raised the issue of cover-up “from the top down” during a Q-and-A session with Gray and Lencioni.

Lencioni noted that “the moral authority of Pope Francis has been greatly tarnished and damaged, no doubt.”

Gray emphasized the need for a Vatican investigation, which Francis has allowed in Chile and Guam, but not yet in the U.S. But he also noted that “the turnaround of the church doesn’t depend on the pope.”

“Viganò has given us an agenda. We need to follow those leads and push that forward.”
— Timothy Busch

Busch also defended Viganò, who called for the resignation of Francis for allegedly covering up for McCarrick. Busch had initially told The New York Times that Viganò shared his now-famous letter or “testimony” with him before it was published by a newspaper owned by EWTN. Busch, who is on EWTN’s board, later denied having previewed that letter.

“We can’t allow the Vatican to get away with this anymore,” Busch said at the conference, adding that it didn’t matter if Pope Francis “originated” or merely allowed “corrupt prelates” to operate in the Vatican.

“Viganò has given us an agenda. We need to follow those leads and push that forward,” he said.

The role of the laity was emphasized at the conference, with some referencing documents from the Second Vatican Council.

Scott Hahn, a member of Opus Dei, noted that after McCarrick stepped down from the College of Cardinals, some called for laicization as a stronger punishment.

“Think about that: What does that imply? What do people think about laity?” he said

But there was little, if any, suggestion that this group might partner with progressive Catholics on this issue, and references to “winning” in a fight against enemies were common. Said one attendee: “It’s not a crisis. It’s almost a war, and we need to fight it.”

Somewhat ironically, at this conference responding to sexual abuse and misconduct in the church, Busch praised U.S. Supreme Court nominee Brett Kavanaugh, who has been accused of sexual assault by several women.

Busch pointed out breakfast guest Leonard Leo, executive vice president of the Federalist Society, who has been shepherding Kavanaugh’s nomination.

“With this new judge, we will have the courts for the next 40 years,” Busch said. “And with 51 votes in the Senate, we are going to see some changes.”