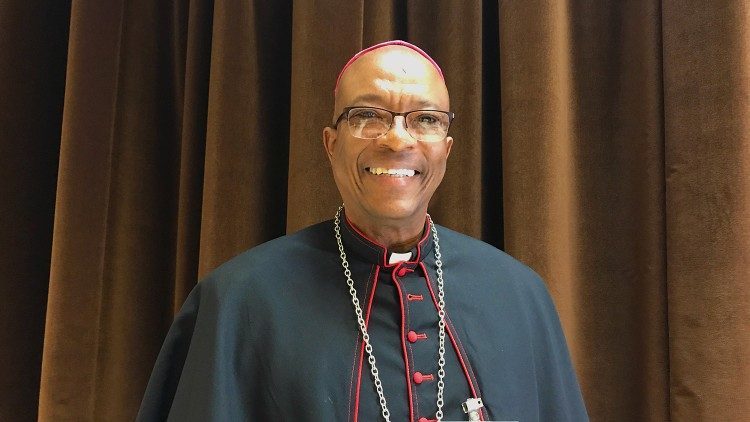 Archbishop Kenneth David Oswin Richards, of Kingston in Jamaica is at the Synod of Bishops on Young People, the Faith and Vocational Discernment, representing the Antilles Episcopal Conference.

He spoke to Vatican News about his satisfaction regarding the draft Document currently being voted upon at the Synod, and about the focus of his own intervention at the Synod.

Archbishop Richards expressed satisfaction for the smooth and efficient work been done since the beginning of the Synod and remarked on how “all those who worked on the final document did an excellent job getting the sense of what the Synod Fathers want to see in it”.

Accompaniment throughout all stages of life

He said his intervention at the Synod focused on accompaniment, also in the pre-youth age; of the need for adequate preparation and accompaniment received in the early stages, and on the pivotal importance of families.

He said in Jamaica the Bishops are working on a Catechesis programme that is specifically geared to accompany believers throughout their lives – from babyhood to old age.

Archbishop Richards explained that he sees the role of parents as very important, “from the moment of their own marriage to when they bring their children to baptism” and accompany them throughout every stage of their growth.

“So you give them the necessary support and invite them to a partnership with the Church in respect of the development of their children” he said.

Archbishop Richards also expressed satisfaction regarding the fact that during the Synod all major issues concerning the young – including that of sexuality – were addressed.

Listen and give guidance

“As synod fathers and as bishops we have to recognize that we listen, but then we have to guide the young people, and sometimes they may have ideas that are radical” he said.

“As teachers, he continued, we must lead young people to truth even as they contend with difficult issues”.

Regarding the reality of the Church in Jamaica, Archbishop Richards said that Catholics make up only 2% of the population – but – he added that, according to a recent University analysis, even though the Catholic Church is number 17 in terms of size, it is number 1 in social impact on society.

This, he explained, is because it has a lot of agencies that provide social services, from assistance to the poor, to healthcare to education.

Archbishop Richards said that one of the things that the Archdiocese of Kingston is looking at is “restoring the Catholic ethos of our schools”, which has been somewhat lost over the years due to the need to make use of government assistance.

He said there is an ongoing effort to have a Catholic presence in the schools with a series of different initiatives and work projects.

Archbishop Richards lamented the fact that ecumenism has lost momentum in the region. He said that the Antilles Episcopal Conference was one of the first involved in establishing the ecumenical movement in the region. He explained that it was very strong in the 1970s and 1980s, driven by all the social work the different Churches were doing together; but, he said, the financial crisis in Europe has negatively impacted humanitarian projects with the cutting of resources and this has led to a weakening of collaboration.

However, the Archbishop pointed out, the Jamaica Council of Churches continues to meet and to have discussions about work they continue to do together and through an umbrella group.

“I look forward, Archbishop Richards concluded, to this document that provides a real hope for the renewal of the Church” and to begin its implementation “that should be a united effort of the Church because we need to act together for the building of His Kingdom and for the salvation of souls.”

Palliative care: taking care of all symptoms, not only pain

Pope: May we pray for and help those with Alzheimer’s disease

Changing our model for development before it’s too…

Pope to Economy of Francesco youth: ‘Like St. Francis,…