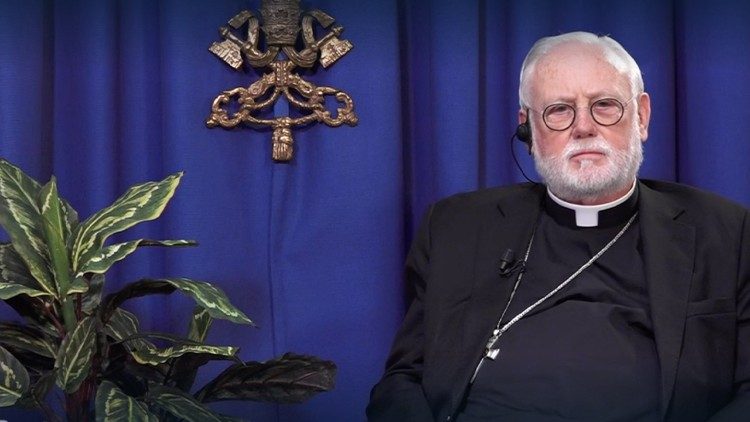 Ahead of his visit to the Ukrainian capital of Kyiv next week, Archbishop Paul Richard Gallagher, the Vatican’s Secretary for Relations with States, grants an interview to the Italian TV station TG2, and says the Holy See always leaves room for dialogue to achieve peace.

The Vatican’s Secretary for Relations with States, Archbishop Paul Richard Gallagher, will be in Kyiv next week for a trip that was supposed to have taken place before Easter, but was postponed due to health reasons.

The journey was the starting point for Archbishop Gallagher’s lengthy interview on Italian television program “Tg2 post” on Thursday evening: a twenty-minute long, live conversation focused on the war in Ukraine, as well as the international and ecumenical repercussions in the Holy See’s diplomatic approach.

Space for dialogue to achieve peace

Considering NATO’s strategy and the logic of the war in Ukraine, Archbishop Gallagher repeated several times that the Pope recognizes the value of any system of security, and therefore defence, as long as it is “proportionate”.

The Pope, he said, is “very concerned” that the world “not enter into a new arms race,” insisting that there must always be “room for dialogue and discussion in order to arrive at peace.”

This is also true with regard to the issue of sending arms to Kyiv, he said. “Ukraine has the right to defend itself,” he noted, but at the same time the world must avoid a race to rearm, since the war poses a dangerous risk due to its possible “nuclear dimension”.

The Holy See’s position, Archbishop Gallagher also repeatedly emphasized, is based on support for every attempt at dialogue: solutions must be sought, with the Holy See “always remaining at the disposal of the international community.” As in the days of the Cold War, the Holy See “creates spaces for dialogue” to favour an understanding and seek a solution.

Archbishop Gallagher was asked whether signs of solidarity, such as the trips of Cardinals sent by the Pope to Ukraine or the reception of the wives of the commanders of the Azov battalion in St. Peter’s Square, are sufficient in this war.

“They are not enough, but they are an important gesture to offer ‘encouragement and hope’ from a Pope who is a ‘master of gestures’,” a Pope who “has a great sensitivity for the suffering of humanity” and wants to bring awareness of this suffering to the whole world.

Pope Francis, he continued, is also fully aware that words carry great weight in diplomatic activity, especially if “people’s lives” depend on them.

The Archbishop said the risk of instrumentalization must be avoided and “candour and sincerity” must be restored.

The conversation then widened to consider the role played by major international actors, starting with the United States and China.

As members of the UN Security Council, “they have a very important role”, Archbishop Gallagher affirmed, at the same time pointing out that all have “a moral responsibility to do their duty.”

Specifically with regard to relations with China, Archbishop Gallagher clarified that “the Holy See has been carrying on dialogue for many years, above all concerning the ecclesial dimension.”

He admitted that the conversation is “not always easy”, that there are difficulties, and that the “the desired results” have not always been seen. However, he said, the Holy See continues to encourage China to play its proper role in the world.

Religious dimension of the conflict

The war in Ukraine also impacts ecumenical relations with Moscow, the Russian Orthodox Patriarch Kirill, and the Orthodox Church.

“There is an undeniable religious dimension to this conflict,” Archbishop Gallagher said, noting a growing climate of tension within the Orthodox Churches and the difficulties involved in the Russian Orthodox Church potentially taking a different position from the Russian government.

“For the Pope,” Archbishop Gallagher explained, “ecumenical dialogue is a priority, even if at the moment the meeting with Patriarch Kirill does not seem opportune, because the right conditions are not in place. But the dialogue will go forward.”

Pope: ‘May the new Saints inspire solutions for peace’

Churches in Holy Land condemn violence at funeral of slain…