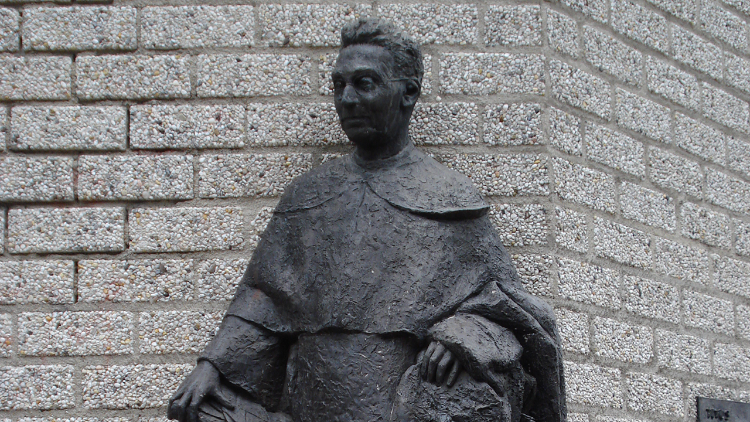 Blessed Titus Brandsma – killed “in hatred of the faith” in the Dachau concentration camp in 1942, who refused to publish propaganda and was outspoken and opposed to anti-Jewish laws being promulgated by the Nazis – is to be canonized by Pope Francis on Sunday. His life was at the centre of a Symposium organized by the International Association of Journalists Accredited to the Vatican (AIGAV) and the Embassy of the Kingdom of The Netherlands to the Holy See.

Titus Brandsma, whom Pope Francis will proclaim a canonized saint on Sunday, is being described as a journalist-martyr of the 20th Century.

This was underscored during a Symposium entitled, “Titus Brandsma: The Challenges for Journalism in Troubled Times”, which was organised in Rome by the International Association of Journalists Accredited to the Vatican (AIGAV) and the Embassy of the Kingdom of The Netherlands to the Holy See on Tuesday.

Vatican News was present at the intimate event, which brought together ambassadors, scholars and journalists.

Blessed Titus Brandsma, a Dutch Carmelite priest and theologian, was killed “in hatred of the faith” in the Dachau concentration camp in 1942.

Following Pope Francis authorized the Prefect of the Congregation for the Causes of Saints, Cardinal Marcello Semeraro, to promulgate a series of causes for advancement towards sainthood, Brandsma, along with nine others, will be canonized.

Born in 1881, Titus Brandsma was a Dutch theologian, journalist, and author, as well as ordained Carmelite priest, who forcefully opposed and spoke out against the anti-Jewish laws the Nazis were passing in Germany before World War II.

In January 1942, when Germany invaded the Netherlands, he was arrested. The Nazis told the Carmelite priest that he would be allowed to live a quiet life in a monastery if he would announce that Catholic newspapers should publish Nazi propaganda.

When Fr. Titus refused, he shortly thereafter died of hardship and starvation in the Dachau concentration camp on 26 July 1942. He died at the age of 61 after he was injected with carbolic acid.

Mr. Loup Besmond de Senneville, President of the International Association of Journalists Accredited to the Vatican (AIGAV) and Vatican-correspondent of La Croix, and Caroline Weijers, Ambassador of the Kingdom of The Netherlands to the Holy See, welcomed reporters to the Symposium dedicated to the Carmelite priest who revealed the responsibility of speaking only the truth, regardless of the risks.

Besmond de Senneville reminded those present that Titus was a spiritual advisor of the Catholic journalist association. He encouraged Catholic newspapers to resist German Nazi pressure.

“On Sunday, Titus will be the first journalist to be a canonized saint in a contemporary sense.”

Ambassador Weijers noted that 10 May “marks the day in which World War II also started in the Netherlands.”

Referring to venue of the Centro Internazionale Sant’Alberto (CISA) Dell’Ordine in Rome’s Prati neighbourhood where the event was held, she said, “It is an honour to hold this Symposium where Titus had lived while studying at the Gregorian University.”

Reflecting on Brandsma, she observed, “The life of Titus shows the importance of having a strong moral compass.”

Dr. Bahia Tahzib-Lie, Human Rights Ambassador at the Ministry of Foreign Affairs of the Kingdom of The Netherlands, called Titus an “exemplary human rights defender.”

Noting he “emphasized that love is stronger than an ideology that preaches hatred,” she said that Titus’ person “instantly made people feel at ease with him and feel connected to him.”

Even at such an early phase, she said, Titus spoke out strongly against the Nazis, bringing him on their radar.

In her remarks about press freedom, or lack thereof, she marveled how Titus at his very last minute, showed love.

Despite being killed by a deadly, lethal injection, Titus she said, gave the nurse who was administering the poisonous drug a rosary made and given to him by another prisoner who was executed.

“He always keeping his calm even in his final moments and gave this loving token and encouraged her to change her ways.”

Dr. Craig Morrison O.Carm, Dean of the faculty of Ancient Near Eastern Languages at the Pontifical Biblical Institute, reflected on “The world in which Titus Brandsma lived and died.”  Morrison gave additional insight from his personal and professional interest in the presentation of the Jews in the New Testament and Early Christian Aramaic literature.

He “discussed the horrific historic context” in which Titus operated and described him as a “journalist martyr.”

Remembering the atrocities of that period, he said, “On 15 May, God will have the last word when Titus Brandsma will be proclaimed a saint in St. Peter’s Square.”

The academic dean spoke about the Shoah, and recalled how Pope St. John Paul II published the We Remember text which says: “We greatly regret the errors and faith of Christians.”

At the event organized by the Embassy of the Kingdom of the Netherlands to the Holy See, he shared how 73 percent of the Jews in the Netherlands were killed and how this could partially be attributed to the fact that Dutch citizens were paid for sharing about Jews in hiding.

He recalled that Titus’ photo was displayed in Washington D.C. at the Newseum, a museum dedicated to the news and journalism, which had to close due to insufficient funds. In the museum, there was a wall of remembrance paying tribute to those journalists who gave their lives to report the truth.

Carmelite William Harry, who has served as the Prior Provincial of the Province of the Most Pure Heart of Mary, and has been communications director for Carmelite NGO, reflected on “Titus Brandsma – a self-made journalist and press scientist,” and noted that, for Titus, “the role of a journalist was about truth telling and truth loving.”

While he was not an expert initially in mass communications initially, his intellect and character made it possible for him to quickly make up for lost time.

The link with Edith Stein

Dr. Christof Betschart, O.C.D., dean and professor at the Pontifical Theological Faculty Teresianum in Rome and specialized in the life and work of Edith Stein and Carmelite spirituality, reflected instead on “Mysticism and resistance during the Third Reich: the contribution of Edith Stein (1891-1942)”

Born in 1891, Edith Stein was a German Jewish philosopher who after reading the works of the reformer of the Carmelite Order, St. Teresa of Avila, converted to Catholicism.

She became a Discalced Carmelite nun who would become known as St. Benedicta of the Cross. She dedicated her life to helping others and serving God. As droves of Jews were deported to Auschwitz, it is believed that 9 Aug. 1942, Stein, along with her sister who had also converted, were among those countless killed in the gas chambers.

Edith Stein was canonized by Pope St. John Paul II in 1998 and would be considered Patron of Europe.

Both brilliant and dedicated to the Lord, and who ultimately gave their lives, Titus and Edith had much in common, he reasoned.

The event concluded with a roundtable of journalists accredited to the Holy See Press Office also discussing challenges of journalism and searching for truth in the age of fake news and social media, which was moderated by Christopher White of the National Catholic Reporter, with Inés San Martín of Crux and Robert Mickens of La Croix International.

Mr. Hendro Munsterman, the Vatican-correspondent for the Dutch National Daily Nederlands Dagblad who has been teaching Catholic and ecumenical theology at different universities in France, concluded the event with some food for thought and evoking the great legacy Titus Brandsma, future saint, has left the world.