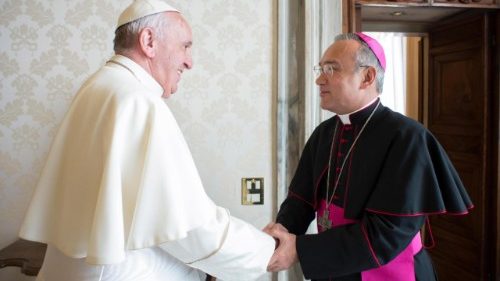 Mozambican President, Filipe Jacinto Nyusi, diplomats accredited to Mozambique, government and ecclesiastical officials this weekend gathered to bid farewell to Venezuelan national, Archbishop Edgar Peña Parra who will begin work on 15 October, in the Vatican. The new role of the Archbishop is as the head for General Affairs in the Secretariat of State. In the Roman Curia, the position referred to in Italian as ‘il sostituto’ or ‘substitute,’ of the Secretariat of State is often compared to that of a Chief of Staff.

Vatican News correspondent, Hermínio José reporting from Maputo says that the former Apostolic Nuncio to Mozambique thanked the people of Mozambique, the Government, Bishops, priests and the religious for the warm welcome accorded him during his tour of duty. In thanking his hosts, Archbishop Peña Parra also wished peace and prosperity to the people of Mozambique. The Archbishop has been the Apostolic Nuncio to Mozambique since 2015. In all, he has been a member of the Vatican’s diplomatic corps for over 25 years

His new position in the Holy See will bring him into close collaboration with Pope Francis as he will be in charge of the day-to-day general affairs in the Secretariat of State.