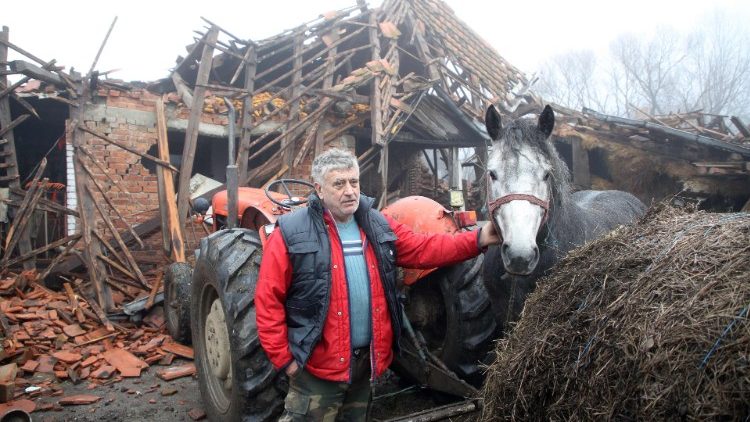 A desperate search for survivors continues in the Croatian town of Petrinja. Huge parts of this town of 25,000 people and nearby towns and villages are in ruins. The massive earthquake killed several people in this area, including a 12-year old girl.

Pope Francic said at the end of his weekly audience that he prays for the victims. “I particularly pray for those who died and for their families,” he said.

The tremor interrupted an open-air press conference of Petrinja’s mayor Darinko Dumbovic. Mayor Dumbovic tried to speak about a 5.2 magnitude quake that already struck the same area on Monday.

But the press briefing turned into a disaster as the even more powerful 6.3 magnitude quake hit the region again.

It was the strongest in Croatia since the introduction of the modern seismic measurement system. In Mayor Dumbovic’s words, “This is like Hiroshima – half of the city no longer exists.”

Firefighters and civilians worked to remove the debris from a collapsed building that fell on a car. A man and a small boy were eventually rescued from the vehicle and carried into an ambulance.

And, Petrinja was left without electricity or running water. Officials and the army scrambled to set up temporary accommodation for all of the displaced residents in need. But more aftershocks make that problematic.

Fear across the region

The quake was also felt in the capital Zagreb where residents were already on edge following an earthquake in March. That quake damaged Zagreb’s famed cathedral, a symbol of reflection for this heavily Catholic nation. The European Union says it is ready to help Croatia.

Tuesday’s earthquake hitting Croatia, an EU-member state, was also felt in nearby nations, including Bosnia.

In Slovenia, the STA news agency said the country’s sole nuclear power plant, 100 km from the epicenter, was shut down as a precaution. Croatian media said the quake was felt in a total of 12 countries.

Back in Croatia, many people in Petrinja, fearing another earthquake, spent the night outside their homes. A resident said it was “worse than a war, as you don’t know what to do, whether to run out or hide somewhere.”

The earthquake added to challenges for Croatia, which is still recovering from a war in the 1990s for independence from what was then Yugoslavia.

Between death and destruction, there was a new life. Health officials noted that a baby was born in a tent in front of a damaged hospital.