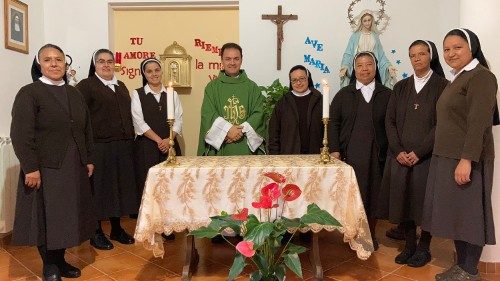 After 4 years and eight months in captivity, Sister Gloria Cecilia Narváez, a religious sister abducted in 2017 by jihadists in Mali, arrived Tuesday in her native country of Colombia.

The Colombian nun of the Congregation of the Franciscan Sisters of Mary Immaculate was abducted in Mali from a village of Karangasso, near the town of Koutiala, in the southern region of Sikasso.

Following her release in Mali, on 9 October this year, Sister Gloria travelled to Rome, Italy. She met the Holy Father, Pope Francis, who blessed her.

Meeting the Pope was like being with a father

On Sunday this week, Fr Humberto González Franco, a Colombian priest working in the Rome office of the Episcopal Conference of Latin America, better known as CELAM, visited Sr Gloria on the outskirts of Rome. This was a day before she was due to travel to Colombia. Since her release, she had been living with members of her religious community on the outskirts of Rome.

Sr Gloria told Fr Humberto of her joy of being released from nearly five years of captivity. She said meeting the Holy Father was like meeting one’s father. She spoke also of her joy in going home to family in Colombia. Sr Gloria recalled her mother, who died while she was in captivity.

“My mother died a year ago, but she was a woman of faith, who prayed a lot for me, for everyone. I am very happy that I will see my family again,” she said.

Frequently moved from place to place

Looking back on her experience, Sr Gloria spoke of frequently being moved from one location to another during her captivity.

It was not safe for her captors to stay in one place, and a lot depended on what the armed groups thought would be safe, so they were constantly on the move. There was a lot of walking. She thanks God that she never had any serious illness in all her period of captivity, not even the common flu, she said. She attributed this to God’s grace.

“On the days when we were stable, I would get up very early in the morning, watch the sunrise, write some reflections with charcoal in a notebook, expressing my trust in God,” said Sr Gloria.

She was allowed short walks within a certain radius established by her captors. She spoke of seeing Camels from afar as villagers went fetch water.

“I would walk a little because I couldn’t get away from the camp. They would tell me you can go from here to here, don’t stray so far, don’t go farther than this point. This is your space,” she recalled.

The beautiful night sky of moon and stars

Sr Gloria also spoke of her nights in captivity. “At night, I would go to bed very early, around 6.30 p.m. Sometimes I would sit and contemplate the sky.”

Sr Gloria said she found much consolation in the beauty of the moon and the brilliant stars in the sky. The empty desert and the wonders of nature helped her remain serene and calm in a difficult situation.

Footprints in the sand

“Often, as I walked through the sand, I always saw in the footprints that God was showing me his love. He had chosen me, and I was sure that he was sustaining me throughout,” said Sister Gloria.

Though she said she developed a respectful relationship with her kidnappers, it was clear that they resented her Christian faith.

Before being kidnapped, Sr Gloria had lived in Mali for 12 years. Her religious community runs a health centre, literacy programme and an orphanage in Mali. She had also previously served as a teacher in Colombia, Mexico and Benin.

Asked by Fr Humberto what advice she would give to those who are in prison or find themselves in bondage, such as those suffering at the hands of human traffickers, Sr Gloria replied:

“They need to hold on to their faith and pray. Pray a lot,” she said.