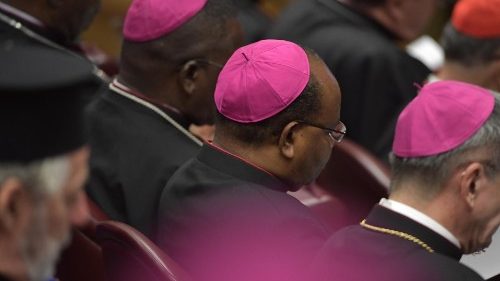 Bishop Mandla Jwara from the Vicariate of Ingwavuma, South Africa, offered a few short reflections on the Synod of Bishops for Youth which is currently underway in Rome. He is one of the South African bishops present at the gathering.

He says that he has found the Synod very good and it has energized him. He wants to go home and start something new with young people because even though things are already happening he thinks that much more can be done.

The Bishop says that although many concerns are the same across the world there are specific issues in the south that affect young people. He says that African youth do come to Church and that they relate well to the bishops. However, he sees two big issues: poverty and broken families. Bishop Jwara said that the whole question of unemployment hits African youth hard. He observes, at youth gatherings and diocesan pilgrimages, that young people often pray for employment. He is worried that when their prayers are not answered they soon feel dejected and wonder why they should bother going to Church

He says that the Synod has mentioned poverty in passing. Much more has been said about unemployment.

All priests must accompany youth

The bishop says that by the end of the Synod he hopes that all the bishops will return to their dioceses and pass on what they have received to local priests because they accompany youth. He says that he notices that often ministry to youth is done by chaplains and left to them, other priests do not really get involved.  He believes that every priest in every parish should be involved in ministering to young people.

Young Percival’s offer to bishops: a direction rather than a challenge