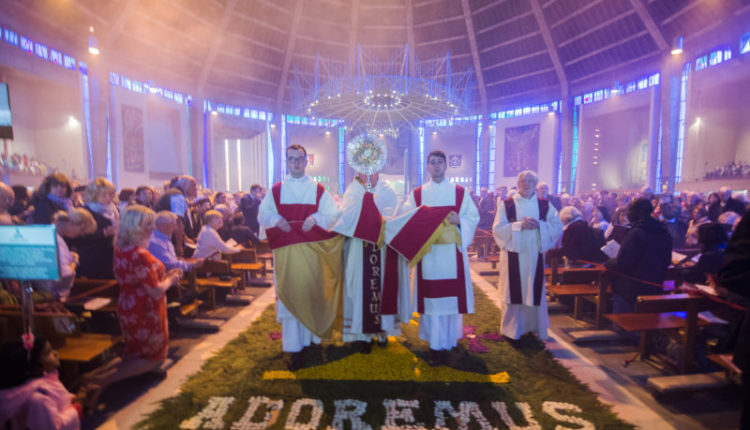 Ordinary Catholics should live the Gospel in word and deed, Archbishop McMahon said

Catholics must continue to proclaim the Gospel in spite of a relentless wave of high-profile clerical abuse scandals divesting the Church of much of her credibility, the Archbishop of Liverpool has said.

During his homily at the closing Mass of the National Eucharistic Congress and Pilgrimage, Archbishop Malcolm McMahon acknowledged the harm done to the Catholic Church all over the world by errant priests.

But he told the faithful that they must nevertheless strive to preach the Gospel both by word and deed.

“As a Christian community we may say because of recent scandals and the problems we have had within the Church we can no longer hold our heads up high,” he told the congregation at the Metropolitan Cathedral of Christ the King, Liverpool, on Sunday.

“Let us keep our heads bowed in penance but we should stand erect nonetheless,” Archbishop McMahon said.

“Maybe our words and our actions won’t carry the same authority as before and it is going to be hard to proclaim the Gospel – but the Gospel still has to be proclaimed and there is no-one else to do it except us poor sinners,” he said.

“So let us continue to do that by our actions as well as our words so that others may see Jesus in us – the suffering Jesus, the dying Jesus, the risen Jesus.”

He said it was essential that Christians revealed to others the “love and healing power” of God through Jesus Christ.

The remarks of Archbishop McMahon represented the second time during the Eucharistic congress that the English bishops expressed remorse over clerical abuse scandals which have this year convulsed the Church in such countries as the United States, Ireland, Australia, and Chile.

In England, the Independent Inquiry into Child Sexual Abuse last month condemned the cover up of “appalling sexual abuse” of children as young as seven at Ampleforth Abbey, near York, and at Downside Abbey, near Bristol.

On Saturday evening, Cardinal Vincent Nichols, Archbishop of Westminster and president of the Bishops’ Conference of England and Wales, criticised unnamed bishops who, he said, had brought the “face of evil” into the Church.

Leading reflections before the Blessed Sacrament in the Liverpool Echo Arena, the Cardinal told thousands of delegates that they had come before Christ “knowing our failings, sensing the anger in many hearts”.

“I feel this with great keenness, and sadness, for the failings of my fellow bishops are there for all to see,” he said.

“As bishops we are bound to each other. As one of this college of bishops, I come before the Lord with little to offer; only to ask for a share in his new life.

“I come as a beggar, seeking forgiveness, laying the load of the hurt, damage and mistrust we have caused at the foot of the cross,” he added.

Because of the scandals, Cardinal Nichols said that when the bishops carried the Blessed Sacrament in procession on Sunday afternoon there would be “not one iota of triumphalism or pride in our steps”.

He said: “In many ways ours is a penitential procession for we are focused on Jesus whom we have crucified.

“Yet we walk with a humble joy for he takes our failure, cruelty and deceit and overcomes it all with his love and mercy,” the Cardinal said. “He is our salvation and it is our humble joy to let his face be seen, his face of tender compassion and hope for our broken world.”

The concluding Mass on Sunday saw the cathedral full to capacity and thousands more joined the half-hour Eucharistic procession afterwards in spite of torrential rain.

The procession marked the end of the first National Eucharistic Congress in England for more than a century – and the only one in which the Blessed Sacrament has been carried publicly in procession.

On this occasion, the leaders of the Church of England and other non-Catholic Christian denominations joined the Catholic bishops for the event.