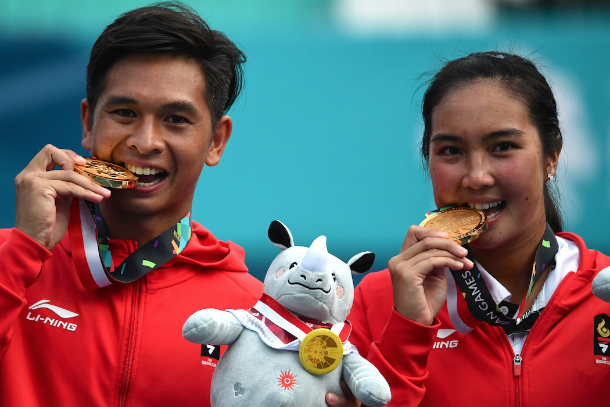 Share
Archbishop Ignatius Suharyo of Jakarta has praised Catholic athletes who won medals at the recent Asian Gameshosted by Indonesia, calling them ambassadors of the church and a source of inspiration for young people.Of the 900 athletes who represented Indonesia at the games held from Aug. 18 to Sept. 2 in Jakarta and Palembangin South Sumatra, 30 were Catholics. Five picked up gold medals for the host country, which won 31 in total.On Sept. 7, Archbishop Suharyo, who heads the Indonesian Bishops’ Conference, celebrated a Mass at Our Lady of the Assumption Cathedral Church in Jakarta for the athletes.He later told ucanews.com that Indonesian Catholics were proud of the athletes and officials and that their achievements were inspirational for Catholic youths.”We in turn will give moral and spiritual motivation to them and hope that they can contribute more in other competitions,” the prelate said. “The persistence of the athletes sends a message that hard work, discipline and unity are key to success.” Kevin Sanjaya Sukamulja, 23, who won a gold medal in the men’s badminton doubles, said he saw his triumph as a blessing and thanked God. “Our success came through perseverance, hard work and prayer,” said Sanjaya, who has been competing on the international stage since 2014.Aldila Sutjiadi, 23, who won a gold in the tennis mixed doubles, said God blessed the hard work and long hours of training that finally paid off. “Never lose hope,” Sutjiadi said.Susi Susanti, a badminton coach and former world champion, thanked the church for continuously supporting them. “We would encourage Catholic youths to participate in sports, which can be a way to contribute to the nation,” said Susanti, who won an Olympic gold in Barcelona, Spain in 1992.Tono Suratman, chairman of the National Sports Committee of Indonesia, thanked Jakarta Archdiocese for organizing the special Mass. “I hope this will inspire Catholic youths to follow in the footsteps of these athletes,” he told ucanews.com.To mark the occasion, Jakarta Archdiocese also gave a red and white rosary — the colors of the Indonesian flag — to each of the athletes.
Share FacebookTwitterGoogle+WhatsAppPinterestEmail