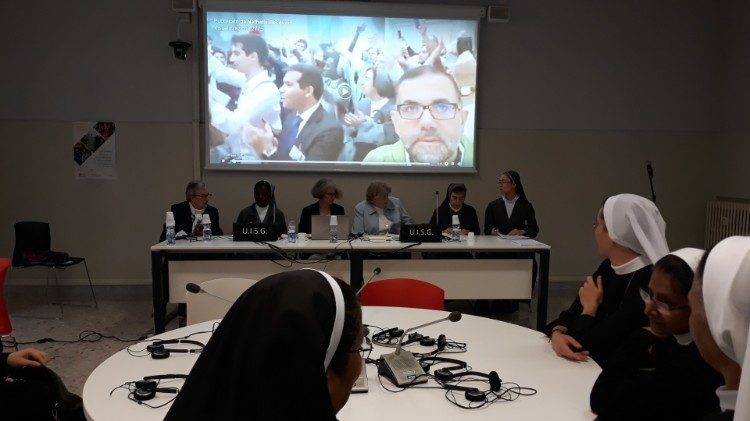 A synthesis of the Synod on Young People through the eyes of 6 of the 7 women religious who participated, organized by the International Union of Superiors General (UISG) in Rome, took place on Monday evening, the day after the Synod formally concluded. Women religious, ambassadors to the Holy See, and journalists took part in person while others joined online via webinar.

Sr Sally Marie Hodgdon, representing UISG as a Superior General at the Synod, responded to the question regarding parity with the male Superiors General counterpart, USG. She said the executive boards of both the UISG and USG have decided to draft a document. In it, they will request that the numbers of auditors from both groups be the same, and that both have voting privileges. She added that this issue was brought up not only by women, but by Bishops, Cardinals and the young people as well.

Sr Allesandra Smerilli, a Salesian Sister, described the listening that led to conversion. Referring to Cardinal Tagle, she said that the listening took place not only with the ears, but also with their gut. Many, including Bishops, were moved by the stories that they heard. This, Sr Allesandra said, provides the backdrop to the addition of synodality in the Final Document which is absent from the Instrumentum Laboris (par. 118ff). A synodal journey took place and transformed the Bishops from defending their authority to embracing synodality. Sr Allesandra said it is because of the presence of the young people that the Bishops began to speak about their personal “synodal” experiences, and were able to articulate it in the Final Document.

Sr Mina Kwon, a Sr of St Paul of Chartres from Korea, called the Synod a festival. She was surprised each day by what God prepared. Throughout the month, the young auditors began to understand that the Church loves them, she said. It was not just the Bishops, but the young people, too, who were talking about what they plan on doing when they return to their countries.

The signs of the times

Sr Lucy Muthoni Nderi, a Salesian Sister from Kenya, said that it was the young people who helped the Bishops identify the signs of the times. The young people reminded the bishops not to talk about them as if they are outside of the Church, but as people ready to help in the Church’s mission. This, she said, is how they awakened synodality.

Sr Nathalie Becquart, a sister of the Xavière Missionaries of Christ Jesus, feels that the Synod is a new Pentecost. She said she could hear the voices of young people in the Bishops. The strong and deep human experiences lived in the Synod helped the Bishops live the Emmaus encounter that became the paradigm of the Final Document. Through this experience they have understood that young people can be partners in the mission of the Church. It also affected the paragraph on man and woman (13), and the paragraph specifically on women in the Church (55), she said. Sr Nathalie emphasized as well that the Bishops and Cardinals at the Synod were asking for women to be present in the decision-making process.

Sr Maria Luisa Berzosa González, Director of Catholic School and Popular Education from Spain, took part as an expert. As an expert, she did a lot of listening and because of that began to understand a lot. The pilgrimage, the intergenerational dialogue, and the concert with prisoners were other ways that shaped the experience, she said. She drew particular attention to the pilgrimage. That was when everyone was equal, providing support, handing someone water…. Sr Maria Luisa thinks that the pilgrimage played a large role that allowed the Bishops a concrete experience within which to understand synodality.