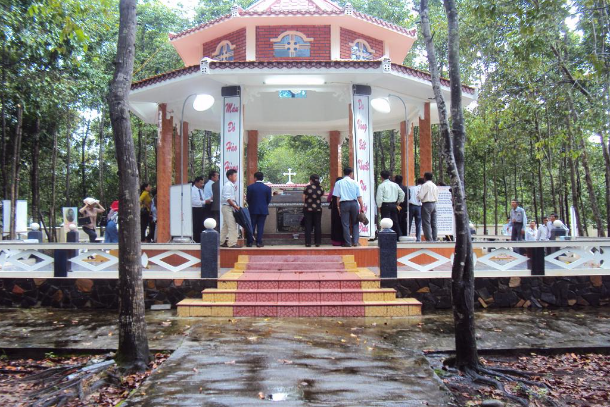 Mary Nguyen Thi Minh, a member of a local secular society, offers incense in front of the Tomb of Martyrs in Vietnam’s Thua Thien Hue province.Minh expresses her deep gratitude to the martyrs for helping her bear witness to the Catholic faith in difficult times.”They give me strength and courage to overcome widespread discrimination against Catholics for years in schools,” said the former teacher who taught maths, physics and chemistry at a high school from 1977 to 1982.Minh said school officials intentionally held courses on political education and public work on Sundays so as to force her to give up attending Masses.”I consistently went to church on Sundays even though they cut off my annual leave and allowance,” the 60 year old said. “Finally they sacked me after five years of failing to stop my faith practice.”

Father Francis Xavier Ho Van Uyen, pastor of Nuoc Ngot parish, told pilgrims on Oct. 13 that the tomb contains the remains of the late Father Joseph Tong Van Vinh and 43 lay Catholics who were killed on Dec. 8, 1883, by soldiers during Catholic persecution.Father Vinh, former pastor of the parish, and his laity decided to stay in the leaf-made church after they heard soldiers would attack them.Father Uyen said his predecessor heard people’s confessions before his decapitation. His body was thrown down a well. The laity were burned alive in the church after it was set alight by the soldiers. Their remains were buried at a local cemetery.He said the martyrs’ remains were re-interred in the old church grounds with an area of 2,000 square meters in 1913. Local Catholics erected a headstone showing pictures of the martyrs on the tomb in 2000.The 145-square-meter tomb was restored last June to mark the 30th anniversary of the canonization of 117 Vietnamese martyrs.The current Nuoc Ngot Church based in Thua Thien Hue province’s Phu Loc district was built in 1925 and is 600 meters away from the tomb. The parish, established in 1742, serves 2,678 Catholics.Paul Nguyen Van Dai, who was addicted to gambling on football and abandoned faith practices for years, said he gave up his bad habits thanks to the martyrs’ intercession.The father of three said that while he was on the way to have his motorbike pawned on June 19, he stopped in front of a martyrs’ relics procession at Phu Cam Cathedral and was urged to change his life.”I have already gone to confession, apologized to my wife and children, and been forgiven,” the 47 year old said after offering incense in front of the Tomb of Martyrs on Oct. 13.Nguyen Thi Cao, a non-Catholic who lives near the tomb, said she offers incense in front of the tomb on a monthly basis to pray for her family members’ peace.”We are not Catholics but our prayers are always answered. So we trust them [the martyrs],” Cao, 75, said adding that non-Catholics call the tomb mieu cac ngai or the temple of gods.Father Uyen said local Catholics also follow martyrs’ examples to bear witness to Christian values in society today. He said they should speak out against violence, social injustice and defend the voiceless.The Tomb of Martyrs is declared as one of six places of pilgrimage during a jubilee year marking the 30th anniversary of the canonization of Vietnamese martyrs in Hue Archdiocese. Over 10,000 pilgrims have visited the tomb twice a month.The archdiocese, which is home to 40 tombs of martyrs and six other historical sites relating to martyrs, records 12 priests and some 10,000 Catholics killed for their faith, and 12 of them were canonized.

Be saints not monsters on Halloween, Filipino kids told