Zimbabwe on edge as alleged vote-rigging gives way to tension 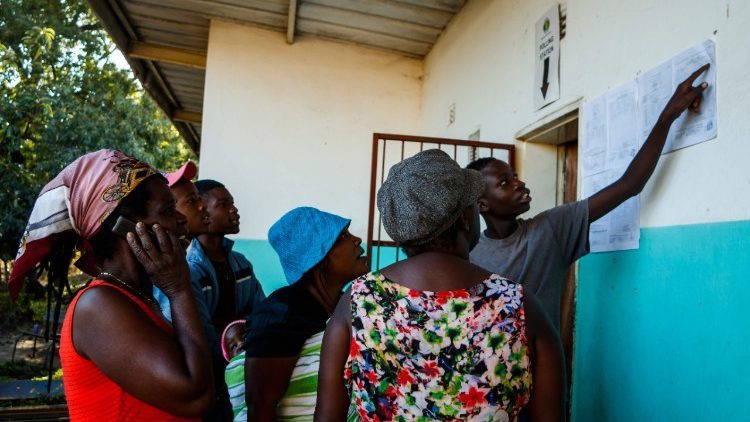 The people of Zimbabwe are on edge as they await official results of an election for a new President, Parliament and Local Councils that the two main contenders both claim to have won.

Zimbabwean civil society groups are working on a court application to force the electoral commission to get all polling stations to publish results.

The Zimbabwe Electoral Commission released results for seven parliament seats out of a total 210 and urged Zimbabweans to be patient while it did its job.

Meanwhile, police with water cannon are circulating in the nation’s capital as supporters of the rival parties discuss unofficial results circulating on social media.

The main opposition – led by Nelson Chimisa of the Movement for Democratic Change – claims that voting results were not posted
outside many of the country’s polling stations as the law requires, raising concerns about possible vote-rigging.

Both Chimisa and President Emmerson Mnangagwa, the man who ousted President Robert Mugabe – after 38 years at the helm of the nation – and who is currently leading the ruling Zanu-PF Party, have issued upbeat assessments of how they did in the vote.

Fr. Brian said different figures are appearing all over the place. He noted news was circulating that for example in Mzumba, “deepest, darkest Zanu-land” Chimisa had significantly got about 90% of the vote.

In fact, Fr. Brian explained, Zanu’s biggest following has historically been in the rural areas and “Mzumba is significant because it was the classic Zanu-PF constituency” meaning that the ruling Party has lost an enormous amount of ground.

Likely call for a recount of ballots

As tensions increase due to uncertainty and allegations of vote-rigging, Fr. Brian said he has heard that Zanu-PF is likely to call for a recount and produce false ballot-boxes with papers with duplicate serial numbers.

As the conversation unfolded he read out election results being published live on a website from a group who call themselves “The citizen’s manifesto”. He said admittedly they only had results from 329 polling stations out of nearly 11,000. The results, he said, overwhelming, put Chimisa well in the lead.

As the nation braces for possible demonstrations Fr. Brian said he hopes the popular protest will be strong enough and that international support will give the nation the strength to overcome the odds at this very crucial moment of its history.

Former Zanu-PF leader and President Robert Mugabe ruled Zimbabwe for 37 years. He morphed from liberator and post-colonial freedom fighter into a tyrant who transformed the country from the breadbasket of southern Africa into a nation ravaged by an Aids pandemic, malnutrition, the collapse of education and health care. Life expectancy in Zimbabwe dropped to 37 in 2006, the lowest in the world.

The economic sectors – manufacturing, mining and agriculture – which once propelled a productive and innovative small economy have for years been grinding to a halt.

Fr. Brian expressed his concern that violence, may – yet again engulf the country – but said “we face another five years of a more subtle kind of violence that involves more people dying of starvation, and lack of medication for people with Aids and things like that.”

“Anyway, he added, if Zanu-PF get in, the economy will collapse within a year – they are already repeating all the things that they did wrong; Mnangagwa said he’s against corruption and the first thing he’s into some corrupt deals himself. This is since he became President.”

“They may be able to rig an election – as every says – but they can’t rig the economy” Fr. Brian concluded