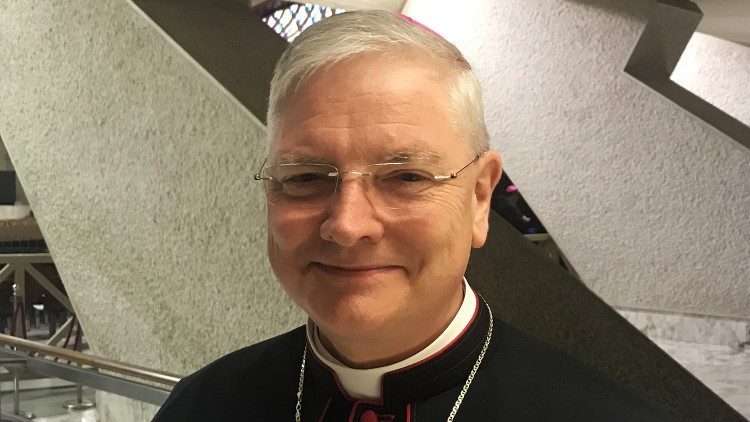 Archbishop Leo Cushley heads up the Archdiocese of St Andrew’s and Edinburgh in Scotland. He was ordained for the Diocese of Motherwell and worked in that Diocese until he was asked to study diplomacy in Rome and, at the same time, a doctorate in Canon Law. He served at Nunciatures in various parts of the world until returning to Rome to head up the English-language section of the Vatican Secretariat of State. In 2013 Pope Francis appointed him Archbishop of St Andrew’s and Edinburgh. He is currently participating in the Synod of Bishops on Young People. I spoke to him about his experience and his hopes when he returns to Scotland in the next few days.

The Archbishop said that the Synod has been a learning process as this was his first experience of a Synod. It has been fascinating to see it action. He says that it was wonderful to meet people from all over the world. It was great to get together with a diverse group of people around the person of the Holy Father, to hear everyone’s concerns for young people. The bishops, he says, all know that young people are the future of the Church today.

He said that the Synod was very keen to engage young people and to make them feel loved, wanted, appreciated and respected in the heart of the Church. He says that the bishops want to help them grow in their love of Jesus Christ, their faith and in discerning their futures.

Archbishop Cushley said that the young people he met before coming to Rome wanted him to tell the Synod Fathers that they want to learn about the Catholic faith. They said that they didn’t want him to make it easy for them or “sugar-coat” it. They want to know what the faith says and they want him, as Archbishop, to explain the richness of the faith to them. He said that young people can chose to live the faith or not. He sees his task as doing his best to make the faith understandable and help young people embrace it. He believes that it will change their lives for the better. He says that he is called to strengthen them in their faith.

There has been a strong emphasis at the Synod on discernment. Archibshop Cushley says that this is giving the bishops food for thought, helping them work out how to proceed in their own context and understanding. He says that this comes to him afresh after hearing the reflections at the Synod.

Speaking about the challenge of young people leaving the Church, or those not in contact with the Church, the Archbishop said that this is a concern and that they want to be able to give people reasons for hope and help young people understand why we believe what we believe. He says that the bishops want to make the faith as attractive as possible.

Archbishop Cushley said that we live in a new era, in a new public square, where people pick and choose and consider their futures with a freedom that there was not in the past. Young people feel as free as anyone else to choose their own lifestyles. However, the Archbishop says, not all lifestyles are helpful, some are more destructive than others. Therefore the Church has to “set out our stall” in the public square like anyone else and make that as interesting, attractive and positive as possible without exaggerating or diminishing the real challenges to live a life of holiness. He said that to live a life of holiness is a challenge but that it can be grace-filled and beautiful. It can also lead to happiness in this world and in the next.

Archbishop Cushley said that the grace of this Synod, for him personally, has been a sense of working together because the Church is like a great big broad family that finds itself on every continent in the world. He says to understand it all you need to see the big picture. Being part of the Synod for a month has enabled that. It has been wonderful and, he says, great fun too.

Synod of Bishops: God is an abstract thought for the young