World Taekwondo in the Vatican to promote a “culture of encounter” 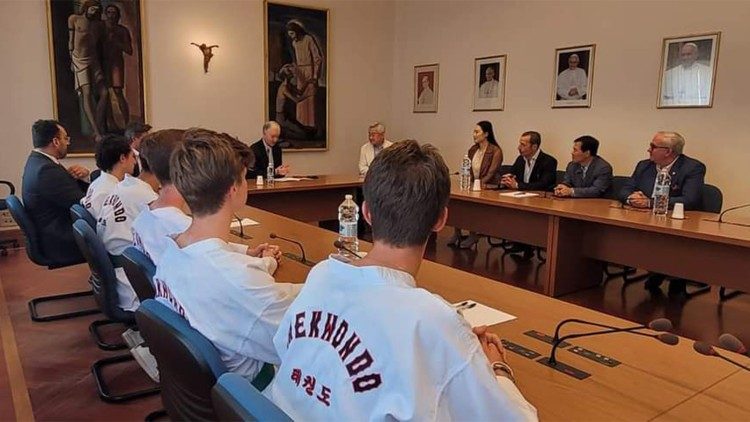 Athletica Vatican is an official member of World Taekwondo. The Federation’s president, Chungwon Choue of Korea, met with the Secretary of the Pontifical Council for Culture, Bishop Paul Tighe, on Thursday.

Members of World Taekwondo, the International Federation governing the sport, paid a visit to the Vatican on Thursday with the aim of promoting efforts towards a “culture of encounter” that remove “patterns of confrontation”, including through sports.

The president of the Federation, Chungwon Choue, met with Bishop Paul Tighe, Secretary of the Pontifical Council for Culture which deals with sports. With them, were 7 athletes of Athletica Vaticana – Vatican Taekwondo, which on 23 November last year, became the 211th official member of the World Federation.

After the initial formalities, they talked about new prospectives of sports and collaboration in solidarity, particularly through the experience of the Humanitarian Taekwondo Foundation in order to offer the young and the most fragile the opportunity to engage in sports.

World Taekwondo has developed a close relationship with Vatican sports in recent years, with a common commitment to promoting dialogue between different cultures for peace.

The following year, World Taekwondo staged a historic demonstration in St. Peter’s Square, in front of the Pope and thousands of people during the general audience.

World Taekwondo President Choue said, “We were delighted to welcome Athletica Vaticana into our Taekwondo family. Taekwondo is a universal language, no matter what your religion or creed; where you come from or who you are; we are all united through sport.”

He continued, noting that both Athletica Vaticana and World Taekwondo “share many common values and we strongly believe in the power of sport to promote respect, friendship and peace. I am confident that the creation of this new entity will help further strengthen Taekwondo and the values of peace around the world.”

Meanwhile, from Saturday to Sunday, the prestigious World Taekwondo Grand Prix will be held at the “Foro Italico” with the participation of the top 32 ranking athletes in each Olympic category to earn crucial points for qualification to the upcoming Paris 2024 Games. Admission is free of charge.