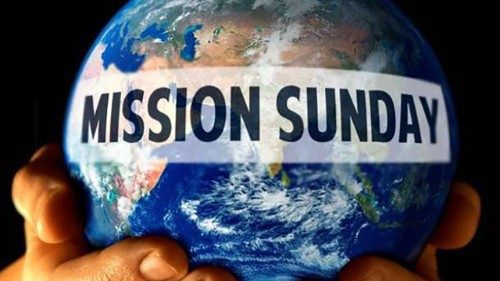 As the Church marks World Mission Sunday, the Chairperson of the newly re-branded Missio Ireland, Archbishop Kieran O’Reilly, SMA, says it is an opportunity to recall the “heroes of mission” around the world. At the Sunday Angelus, Pope Francis also paid tribute to missionaries around the world for their witness to the Gospel, often at great sacrifice.

The Church around the world is coming together on 24th October to celebrate World Mission Sunday.

This day highlights the work being done by missionaries who are living in situations of difficulty, and also offers people the chance to express solidarity and remember them in prayer.

The theme Pope Francis has chosen for his 2021 World Mission Sunday message is: We cannot but speak about what we have seen and heard (Acts 4:20). In it he says:

“Once we experience the power of God’s love we cannot help but proclaim and share what we have seen and heard. Jesus’ relationship with His disciples and His humanity shows us the extent to which God loves our humanity and makes His own our joys and sufferings, our hopes and our concerns.”

Speaking to Vatican Radio, Archbishop Kieran O’Reilly, SMA, the Chairperson of Missio Ireland — the Irish branch of the Pontifical Mission Societies — said it is a “great call for us to acknowledge the witness that is being given at this time; the witness of so many Christian communities in different parts of the world, and that witness is so strong that we cannot but speak about it, and I think that is one of the aspects of this Mission Sunday that’s so important.”

The Archbishop of Cashel and Emly, located in the mid-west of Ireland, said it also provided an important opportunity to recall the “heroes of mission”: those who are in situations of great difficulty and challenges and the ones we must keep in our thoughts and prayers.

The pandemic and mission

Asked what the pandemic has taught us about mission, Archbishop O’Reilly said it has “transformed mission throughout the world in many respects, in that it has heightened the dependence all of us have on each other on the brotherhood and the sisterhood of the human race.”

He went on to say that it is important to be more missionary towards everyone, whether that be looking after the sick, or ensuring that vaccines are fairly distributed; as well as tackling the economic consequences of the pandemic, especially in poorer nations.Listen to the interview with Archbishop O’Reilly

The Archbishop underlined that we are all called to be missionaries, adding that Pope Francis, over the course of his pontificate, has stressed that every person is called to be “a missionary disciple.”

There was originally the idea of going on the foreign mission, and Ireland was a big contributor to that, he said; but the call now, especially in light of the Second Vatican Council, is that “the very identity of the Church is mission, and each person inside the Church is called to be a missionary disciple.”

Archbishop O’Reilly noted that there are still missionaries who go off to places that have not heard the Gospel, but there is also a very strong call for “communities well established in the faith to reinvigorate so that they will become missionary disciples and missionary communities.”

Sister Veronica Onyeanisi, OLA, is a missionary sister based in Kaduna in northern Nigeria, and the face of this year’s World Mission Sunday appeal. Sister Veronica is leading the Women’s Interfaith Council, “which has brought thousands of Christian and Muslim women together with a vision for a society where both faiths can live in peace and attempt to break the vicious cycle of religiously framed violence and intolerance.”  She herself is encouraging people to “count on what unites us rather than what divides us.”

“That is the ideal for all human journeys, isn’t it?” said Archbishop O’Reilly, remarking on the beauty of the phrase. “There is so much that unites us. We can always be picking at the things that divide us, but if we can journey together in understanding of each other it will surely bring us closer to the God who loves us and the God who gives us His Son.”

Ahead of World Mission Sunday, the Irish branch of the Pontifical Mission Societies has been given a makeover. The former World Missions Ireland was rebranded this week as “Missio Ireland.”

“The reason we changed,” explained the Archbishop, “is because I think it’s just to bring us more in line with the greater world mission groups that are operating out of so many countries, that they’re nearly all branded as ‘Missio’ [of] the particular country now. So we decided it would be good if we had the same name.”

He added, “We also felt it would be linking in more with the universal mission of the Church and that was important for us.”

Myanmar Catholics urged to speak out for their country