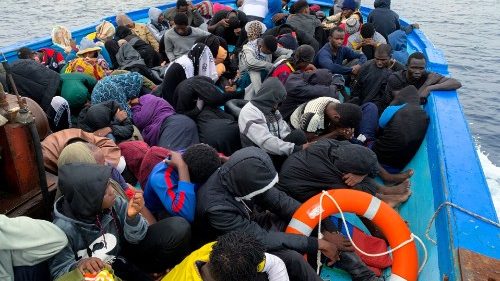 With a powerful appeal to the international community to implement lasting resolutions for the safeguard of lives and the dignity of migrants and refugees, Pope Francis says his thoughts never stray from the predicament of the thousands of men, women and children stranded in Libya as they search to reach Europe in the hope of a better life.

“I express my closeness to the thousands of migrants, refugees and others who are in need of protection in Libya: I never forget you. I hear your cries and I pray for you.”

Addressing the faithful following the Sunday Angelus in St. Peter’s Square, Pope Francis said that “so many of these men, women and children are subjected to senseless and inhumane violence.”

Once again, he said, “I ask the International Community to keep its promises” and to find concrete and long-term solutions to regulate the migratory flows in Libya and throughout the Mediterranean.”

He noted that the suffering of those who are picked up by Coast Guards and sent back is enormous:“There are real ‘lagers’ there”, he said, referring to the detention centers where migrants and refugees are enclosed.

Human rights observers and those who have managed to leave those centres have repeatedly denounced the conditions in the camps where, they say, disregard for human rights is rife.

“It is necessary to end the practice of returning migrants to countries that are insecure and to give priority to life-saving operations in the sea,” the Pope added, appealing for safe and legal passages for those on the move and for the possibility for them to disembark in safe ports.

He called for legislation that will” guarantee dignified life conditions” that, he said, must provide “an alternative to detention, as well as legal immigration and asylum procedures.”

Pope Francis concluded his appeal, inviting us all to take responsibility for the situation of these brothers and sisters of ours, and asked everyone to pray in silence.Listen to our report

Concern for treatment of migrants in Libya

The UN has said the Libyan government must immediately address the dire situation of asylum-seekers and refugees.

Since the fall of the late leader Muammar Gaddafi a decade ago, Libya has been suffering insecurity and chaos. In the last few years, the North African country has become a preferred point of departure for illegal migrants wanting to cross the Mediterranean into Europe.

However, many rescued migrants – picked up from rickety and un-seaworthy boats -end up inside unsanitary and overcrowded reception centres.

Many migrants rescued from the Mediterranean Sea have spoken of being tortured and their families extorted for ransoms while they were held in Libya’s government detention facilities.

Such accounts come on the heels of a new 32-page UN report which found evidence of possible crimes against humanity committed against migrants intercepted at sea and turned over to Libya.

Separately, the United Nations High Commissioner for Refugees said that 198 migrants had been rescued at sea and returned to Libya on Saturday.