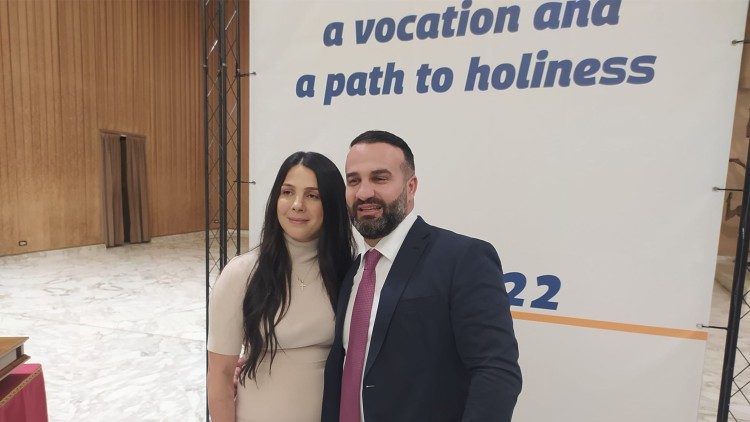 The Abdallahs, Daniel and Leila, are parents of seven whose lives were overturned two years ago by the deaths of three of their children at the hands of a drunken driver. The couple told their story at the 10th World Meeting of Families, reflecting on how their faith has led them toward forgiveness.

Daniel and Leila Abdallah share their personal story with fellow Catholics from around the world gathered in Rome for the 10th World Meeting of Families (22 – 26 June) in order to encourage them to “hold on to Christ, embrace suffering and offer it up to the cross,” even when life is difficult.

The Maronite Christian couple – parents of seven children – who gave a presentation on the fourth day of the 5-day event “on paths of holiness”, narrated the tragedy they went through on 1 February 2020 when a drunk and drug-affected driver killed three of their children: daughters Sienna and Angelina, son Anthony, and their niece Veronique Sakr.

It is a story of pain, of disbelief, of a family shattered and a community in mourning, but it is also a story of love, forgiveness and healing, as the couple continues on the path to holiness.

During the speech, Leila tells of her choice to forgive the driver who caused her and her family so much pain. When asked by the media about her feelings, she said, “I don’t hate him; I think in my heart I forgive him, but I want the court to be fair.” She notes that she did not know the impact of these words yet she believes that “the Holy Spirit moved my lips to speak words of forgiveness.”

Daniel, for his part, said he realized that whatever reaction he would have could determine where he and his family “would be” for the rest of their lives.

“Forgiveness is more for the forgiver than the forgiven. When you forgive the other person, you start to heal.”

From pain to forgiveness

The couple from Australia spoke to Vatican News in an interview on the sidelines of the WMOF, sharing their testimony of love in spite of the loss of three of their children.

Daniel insists that the depth of forgiveness they have as a couple has also taught them so much about each other and about the way they look at each other. He adds that in spite of the occasional arguments, they have learned how to come back to a place of forgiveness because “there are sometimes things that are not worth holding on to.”

His wife, Leila, shares his viewpoint, noting that some couples get divorced because they do not know how to forgive each other.

Listen to the interview with Daniel and Leila Abdallah

Holding on to faith

The couple’s presentation at the WMOF also touched on their faith which they had to draw upon as they tried to heal and forgive.

When asked about how they developed this faith, Leila recounts that she grew up in her faith from her childhood: attending Mass, going to confession and praying the rosary. She says she continued with these practices even after her marriage and she has passed them on to her children, teaching them to practice forgiveness as well.

Her husband’s faith came a bit later, after marriage and having children. He notes that he has drawn a lot of inspiration from the “Our Father”, particularly when we say “forgive us our trespasses as we forgive those who trespass against us.”

Message for others in grief

To other people struggling with grief and loss, Daniel and Leila invite them not to give up hope and to offer their sufferings to Christ on the cross, because we will all experience the suffering Jesus as well as the glory of Jesus.

“My message would be everyone has a cross to carry,” says Leila. “We can’t choose what will happen to us in life, but we can choose how to respond. Respond with a smile! Offer it up to Jesus! Trust in God’s will.”

The couple has even found a way to transform its pain into helping others. It has established the “i4give.com” foundation which gives people tools to learn how to forgive and the benefits of forgiveness.

“Our world is yearning for forgiveness,” says Daniel, “And when we talk about it, people are just so hungry and so thirsty to understand what tools do I need to be equipped with about forgiveness.”