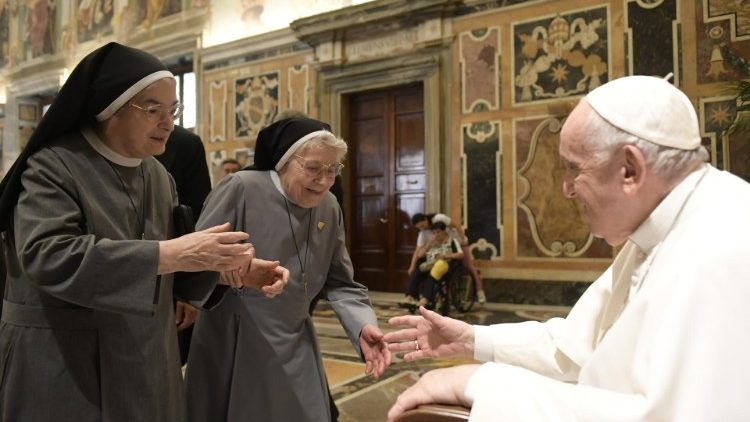 In his address to the Order of Don Orione, Pope Francis encourages members of the Orionine Family to share their charism of charity for the poor with others, to cultivate fraternal relationships, and to open themselves to new frontiers without fear.

Pope Francis, on Saturday, welcomed participants in the recent 15th General Chapter of the Order of Sons of Divine Providence and a delegation of the charismatic Orionine Family, on the occasion of the 150th anniversary of the birth of their founder, St. Luigi Orione (1872–1940).

The theme of the General Chapter

The Chapter met from 31 May to 18 June 2022  in Montebello della Battaglia , in Northern  Italy, on the theme “’Let us throw ourselves into the fire of the new times’ – To Evangelize the world through the Prophecy of Charity which must be new in the style, form, and frontier”, which was inspired by the  writings of their founder.

A seed grown into a big plant

Extending his greetings to all the Orionine family, Pope Francis acknowledged, in particular, Don Tarcisio Gregorio Vieira who has been confirmed Superior General of the Orionine congregation.

He then thanked the Lord for allowing the “seed“ sowed by St Luigi Orione to grow into “a big plant” with “many branches” – made of men and women religious, members of the Secular Institutes, and laypeople  – nurtured by his charism of welcoming, giving shelter, and support to the poor and the needy.

This charity work, he noted, is all the more important in today’s world, “marked by individualism and consumerism, efficiency and appearance”.

Referring to the theme chosen for the Chapter, Pope Francis encouraged the members of the Orionine Family not to keep  their apostolic ardour for themselves, but to share it with others, remarking that “Jesus’ fire of love ignites people’s hearts”, gives them light, and animates them.

“May the fire not remain only in your home and in your communities, and not even only in your works, but may you throw yourselves into the fire of the new times for the good of the people.”

The Pope further emphasized the importance of fraternal relationships, noting that being missionary disciples today, is not so much about “doing things”, but rather ”an apostolic identity which is constantly nourished in the fraternal life of the religious community or the family”

“It is important to take care of the quality of community life, relationships, common prayer: this is already apostolate, because it is witness. If there is coldness among us, or, worse, passing judgments and gossip, what apostolate can we do?”

Pope Francis and members of the Orionine Order

Looking at today’s world as apostles

Wrapping up his address, Pope Francis called upon the  members of the Orionine Family to “throw themselves into the fire of the new times”, following the example of their founder, and his attitude of readiness to dialogue with the world.

“This – he said – requires looking at today’s world as apostles, that is, with discernment, but with sympathy, without fear, without prejudice, with courage”.

We must see the miseries of our world as the reason for our apostolate and not as an obstacle, the Pope insisted.

“Our time asks us to open ourselves to new frontiers, to discover new forms of mission.”

The Pope pointed to the example of Mary who, upon learning about Elizabeth’s remarkable conception in her old age, “arose and went with haste” to greet and help her cousin. It was in those circumstances, “in serving” – he said –  that “Mary received the confirmation of the plan of God’s providence”.

The Congregation of the Sons of Divine Providence

The Congregation of the Sons of Divine Providence was founded in Italy in 1893, while St. Luigi Orione was still a seminarian. and was given canonical approval in 1903. Its work expanded to operating schools, boarding houses, agricultural schools, and charitable and welfare works across Italy, with several associated congregations being founded, as well. The order then expanded to Brazil, Argentina, Uruguay, Palestine, Poland, Rhodes, the United States, England, and Albania, and is now active in over 30 nations.