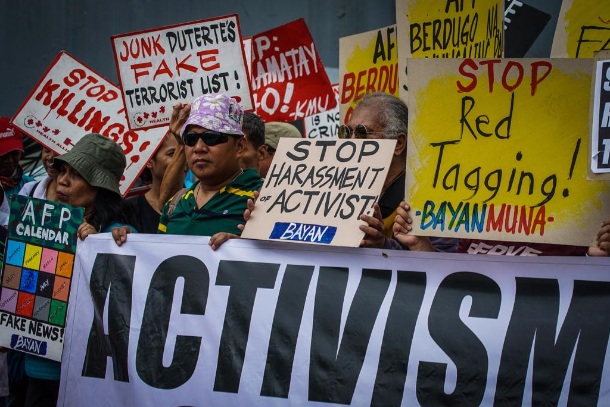 When the movie Liway was first shown in August at the Cultural Center of the Philippines and a few selected theaters in Manila, it received a thundering ovation.Both young and old erupted into chants of “Never again!” The so-called millennials said the movie had opened their eyes to the realities of the dictatorship of Ferdinand Marcos.Liway was a sleeper hit. Director and screenwriter Kip Oebanda ignored focus group tests done by major film companies to maximize market reach.”I just wanted to tell our story,” he told ucanews.com. “I felt hurt by people who try to erase our history. We lived this life and I wanted to tell them, ‘You cannot dismiss our stories.'”The story is about how Oebanda’s childhood was spent in a detention camp for political prisoners. His mother Cecil, now a leading figure in the fight against human trafficking, is a former communist guerrilla who was arrested as she came down from the mountains to give birth.

Cecil was an artist and a catechist, one of the many who were forced to go “underground” by the military crackdown on all forms of dissent during those dark years.Liway, a mix of comic and tear-jerking episodes, is told from the viewpoint of Oebanda as a child.The film earned more than twice at the tills than former top grossers of the Philippine independent film festival dubbed Cinemalaya. The outcry for more on social media prompted commercial theaters to give Liway a nationwide run starting Oct. 10. The movie has also been shown in major universities in the country as part of academic activities.Oebanda and other young filmmakers recently found themselves in the spotlight as the Philippines’ military and police warned against communist infiltration of Manila’s top universities.Part of the basis of the allegation is the showing of films about the years of the Marcos dictatorship and the plight of tribal people.Among the colleges tagged as recruitment hubs for communist rebels were Catholic institutions like the Jesuit Ateneo de Manila University, the 400-year-old University of Santo Tomas of the Dominicans, the De La Salle University of the Brothers of the Christian Schools, and the San Beda College of the Benedictines.Lasallian Brother Armin Luistro, who used to serve in government as secretary of education, said the allegations had created fear.”They are creating a scenario that’s not even there by talking about the supposed ‘Red October’ plot,” he said. “To me, that’s the scary part. If your official intelligence group talks about that scenario, I think they have a modus that’s out of the usual.”The Red October plot is supposed to be a communist uprising that would be staged in October to oust President Rodrigo Duterte.The military and police said communist rebels had reportedly infiltrated universities in Manila where students are being recruited to take part in the revolution.Dominican priest Jesus Miranda Jr., secretary-general of the University of Santo Tomas, said the military is peddling stereotypes without evidence.”I do not understand why they are red tagging the university for standing up for human rights, standing up against the return of any form of dictatorial rule,” said Mark Abiner of the university’s community development office.Jesuit priest Jose Ramon Villarin said there is no present evidence to even suggest that communists have infiltrated the Ateneo de Manila University.He said the Ateneo community “will not shirk from its mission to holistically educate our youth in proper history and ethics, particularly on the matter of martial law and its impact on Philippine society.””We will persist in encouraging our faculty and students to think critically, exercise academic freedom in search of truth, and speak truth to power, so that the Ateneo continues to contribute to the attainment of a more vibrant democracy,” said Father Villarin.Michael Tan, chancellor of the University of the Philippines, said: “Of course we show martial law videos. We allow peasants to come in. We allow tribal people. If that is communist, I’m sorry.”In a statement, about 300 artists, filmmakers, and journalists said the allegations are “red-baiting and slander of the worst kind” that impinge on their right to freedom of expression, speech and assembly. “Our film screenings … provide [students] with knowledge and insight into that dark chapter in our history,” they added.J.L. Burgos, a filmmaker who spent a childhood marked by the repeated arrests of his journalist father, said the government seemed to be in a panic.”The military is acting like it still serves Marcos … Maybe they don’t want the current generation to know about their past abuses,” he said.Movie director Oebanda is half angry, half amused. He said the military has accidentally given free publicity to movies about martial law.”This government really needs to understand the Streisand Effect,” he said, referring to the phenomenon when efforts to suppress information fuel more publicity for the offending news.