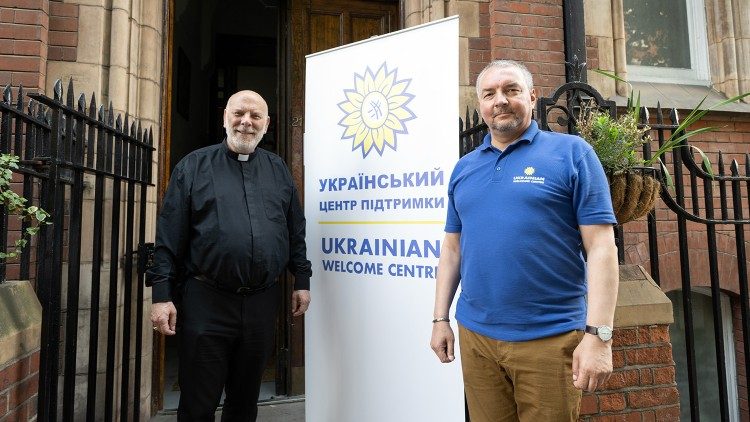 The London-based Ukrainian Welcome Centre is providing support and hope to thousands of Ukrainians who have arrived in the UK in order to escape the bloodshed in their country.

Following the Russian invasion of Ukraine six months ago, millions of people were forced to flee their homes in search of safety, protection and assistance in other European countries.

Many saw their homes destroyed and left with what they were able to carry.

According to the UN refugee agency UNHCR, over 110,000 Ukrainians have arrived in the UK to escape the conflict.

The most recent update from the UK Government shows that almost 203,100 visa applications have been received.

Those who arrive in a foreign country face significant challenges in order to be able to find accommodation and access services.

Help is now at hand in the form of a Welcome Centre which has been set up in London by the Ukrainian Catholic Eparchy of the Holy Family, in partnership with the Association of Ukrainians in Great Britain.

The Ukrainian Welcome Centre also has a website where people can access information on healthcare, finance, employment, language support and education, as well as long-term living.

Andriy Marchenko is director of the Centre, which is based at the site of the Eparchy’s cathedral.

Listen to the interview

Speaking to Vatican News about the services provided, he said: “The biggest task for us is to get these people going as soon as they arrive in the UK to find a place to stay. They need to get their documents in order; they need to send their children to school, and most of these people arriving will be mothers with children because their husbands will normally have stayed in Ukraine to fight. And so, we need to provide these people with the necessary sign posting, and all the other assistance that we can provide to them because they do have many enquiries.”

The Centre is run with the help of many partnerships with external organisations that have been established. Several British Government departments also provide support in the form of “drop in sessions” at the Centre.

Another lifeline, is being on the site of the Cathedral of Ukrainian Catholic Eparchy of the Holy Family.

“The Eparchy will be acutely aware of the many problems that these people will be facing when they arrive to the United Kingdom, and so it has been both an inspiration and very practical help,” said the director.

Asked about the challenges many Ukrainians face arriving in the UK, Mr Marchenko said there are a range of obstacles they need to overcome.

“Most people who come here always approach me and they say ‘you’re the director, you know more than we do, when will this be over, when will we be able to go home.’ So, first of all, they are longing to go home; they have found themselves in a foreign country they know little about.”

He adds that many who arrive don’t speak fluent English, which is a challenge when looking for information. Some are disorientated and traumatised from what they have witnessed in their own country, so they need advice as to how they can tap into the correct services.

The director stressed that the Centre encourages people to come back and keep socialising even when their problems have been solved.

“We want them to come back and keep socializing with other Ukrainians, to keep speaking Ukrainian, to feel like part of the Ukrainian community.”

The Ukrainian Welcome Centre is almost entirely run with the help of volunteers who speak both English and Ukrainian.

“We have so many applications for volunteering,” Mr Marchenko noted, adding that each volunteer goes through a screening process before they are allowed to work.

A future of peace

Speaking about the future of the Centre, the director said that as a Ukrainian, he is looking forward to the Centre becoming “obsolete.”

“When the war is over and we’re no longer needed, I think it will be a dream come true for all the Ukrainians because obviously this Centre is there to help people in need, and we hope that the war will be over soon and they don’t need to turn to us for help, so they’re able to go home and get on with their lives. But in the meantime, it is important for us to make sure that these people not just find shelter in the UK, but that they thrive here.”