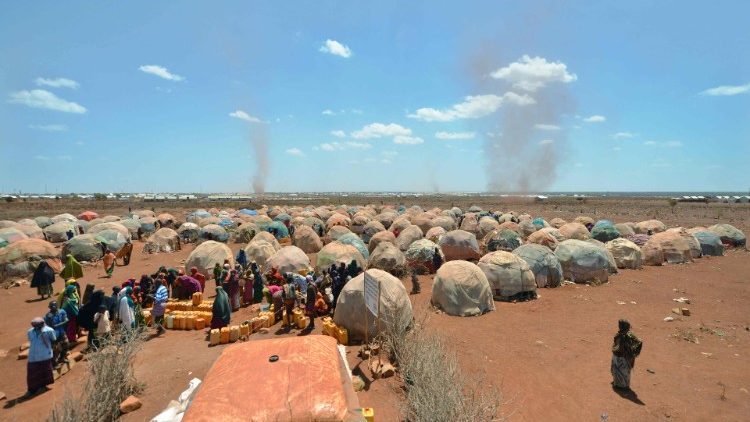 In an interview with Vatican News, the Apostolic Administrator of Mogadishu, Bishop Giorgio Bertin, talks about the humanitarian emergency in Somalia facing its worst drought in 40 years, as the Church seeks to offer humanitarian relief for the millions of people affected.

By Olivier Bonnel and Lisa Zengarini

The figures are are stark and show a situation which is unprecedented in the last four decades in Somalia. According to the UN High Commissioner for Refugees (UNHCR), and the Norwegian Refugee Council (NRC), more than 755,000 people have been internally displaced this year due to severe drought in the Horn of Africa, bringing the total figure to 1 million people displaced since January 2021, when the drought began.

“This milestone is a huge wake-up call,” said NRC Somalia director Mohamed Abdi. The number of people affected by extreme food insecurity as a result of the lack of rain is expected to rise from some 5 million to more than 7 million in the coming months.

The climate-related crisis is exacerbated by the rising of food prices due to the war in Ukraine.

“Famine is now haunting the entire country. We are seeing more and more families forced to leave everything because there is literally no water or food in their villages,” warned Abdi. “There is an urgent need to increase funding for the help before it’s too late.”

Bishop Giorgio Bertin has been the Apostolic Administrator of Mogadishu since 2001, and is a direct witness of the humanitarian emergency. He confirmed to Vatican News that the situation is dire.

Last week, the Italian-born bishop, accompanied by the Apostolic Delegate for Somalia, Archbishop Antoine Camilleri, met with a government official in charge of emergency humanitarian aid who told them the situation is “particularly difficult in the South-West, the Central regions and part of the North-East of Somaliland”.

In these areas, the most vulnerable populations are semi-nomads, living of their herds and agriculture. “If there is no rain, they are the first ones to be affected,” said Bishop Bertin. Forced to flee their land, they crowd up in the outskirts of the main cities of the country.

For several years the Catholic Church has been been active in relief efforts through the local Caritas, which works on the ground with Somali organizations.

Some areas are difficult to reach for security reasons, due to ongoing conflict and political instability in the country.

The Food and Agriculture Organization (FAO) said last week that famine could set in in eight regions of Somalia by September if crop failures and lower livestock production continue.

The UN organization warned that it could become widespread, if the prices of key commodities continue to rise and if humanitarian aid fails to reach the most vulnerable.

These concerns have been echoed by the UNHCR.

“The situation in Somalia was already one of the most underfunded before this latest crisis. Although we and our humanitarian partners are doing what we can to respond to the situation, our resources are simply insufficient,” noted the UNHCR representative in Somalia, Magatte Guisse.

In June the UN High Commissioner for Refugees announced it needed $42.6 million to help 1.5 million internally displaced people, refugees and members of host communities affected by drought in Ethiopia, Kenya and Somalia.

Bishop Bertin told Vatican News that a new international appeal for solidarity with Somalia will be launched in the coming days with the support of Caritas Internationalis.