Waiting for the Pope at Phoenix Park 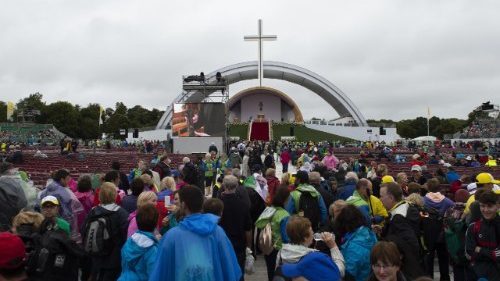 Thousands of people have been descending on the Phoenix Park in Dublin where Pope Francis will celebrate the closing Mass of the World Meeting of Families this afternoon in front of an estimated crowd of 500 thousand faithful.  Many were here since early this morning to make sure they avoided the many traffic  restrictions put in place for the celebration.

It’s a festival like atmosphere in the park with people dressed warmly for the occasion and with umbrellas at the ready. Some have come prepared with packed lunches, others can be seen walking around the park with papal flags to the ready.

The Pope will be saying Mass at the site of the Papal Cross which was constructed for the visit of St John Paul II in 1979. Indeed when the Polish Pope died in 2005 the Irish faithful gathered for a Vigil to remember the man who had told the youth of the country, “young people of Ireland, I love you.”

The white cross which is 116 feet high is just one point of reference in the park which is one of the biggest in Europe. Located here also is Dublin Zoo and the Presidential Residence.

Ahead of the arrival of the Pope the crowds are being entertained by choirs and well known lrish singers. But anticipation is building as Pope Francis prepares to celebrate Mass; the first Papal celebration in nearly forty years.

Witnesses filled with hope after Festival of Families

Pope in Ireland asks forgiveness for a litany of abuses