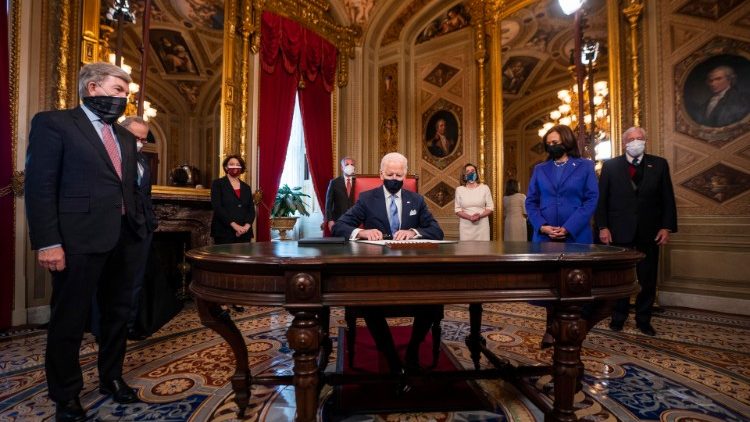 “My prayers are with our new President and his family today,” wrote Archbishop José Gomez, President of the USCCB, in a statement on the inauguration of Joe Biden as the 46th President of the United States. “I am praying that God grant him wisdom and courage to lead this great nation, and that God help him to meet the tests of these times, to heal the wounds caused by this pandemic, to ease our intense political and cultural divisions, and to bring people together with renewed dedication to America’s founding purposes, to be one nation under God committed to liberty and equality for all.”

The USCCB President said he is looking forward to working with the Biden administration and with the new Congress, noting, “as with every administration, there will be areas where we agree and work closely together and areas where we will have principled disagreement and strong opposition.”

At the same time, he noted the unique situation of having a Catholic in the White House for the first time in 60 years. “It will be refreshing to engage with a President who clearly understands, in a deep and personal way, the importance of religious faith and institutions.” Archbishop Gomez said he finds Biden’s “piety and personal story… hopeful and inspiring.”

However, the President of the U.S. Episcopal Conference also insisted on the Bishops’ duty “of proclaiming the Gospel in all its truth and power, in season and out of season, even when the teaching is inconvenient or when the Gospel’s truths run contrary to the directions of the wider society and culture.” Archbishop Gomez continued, “So, I must point out that our new President has pledged to pursue certain policies that would advance moral evils and threaten human life and dignity, most seriously in the areas of abortion, contraception, marriage, and gender. Of deep concern is the liberty of the Church and the freedom of believers to live according to their consciences.”

The Archbishop highlighted “the continued injustice of abortion” as the “preeminent priority” for the nation’s bishops, while explicitly stating, “preeminent does not mean ‘only’.” But although the Bishops “have deep concerns about many threats to human life and dignity in our society,” he said, “we cannot stay silent when nearly a million unborn lives are being cast aside in our country year after year through abortion.”

In particular, Archbishop Gomez expressed his hope that President Biden and his administration would “work with the Church and others of good will,” rather than “impose further expansions of abortion and contraception,” as Biden had promised during the presidential campaign. To that end, he expressed his hopes for dialogue on the underlying issues that foster abortion, while working together “to finally put in place a coherent family policy” in the United States. “. If the President, with full respect for the Church’s religious freedom, were to engage in this conversation,” he said, “it would go a long way toward restoring the civil balance and healing our country’s needs.”

Archbishop Gomez made a strong appeal for reconciliation in a divided country, saying, “President Biden’s call for national healing and unity is welcome at all levels,” and is “urgently needed.” Yet, he added, “As believers, we understand that healing is a gift that we can only receive from the hand of God.” Acknowledging that God alone “knows and can judge the intentions of our hearts,” Archbishop Gomez prayed “that God will give our new President, and all of us, the grace to seek the common good with all sincerity.”

Entrusting “all our hopes and anxieties in this new moment” to the Blessed Virgin Mary, Archbishop Gomez concluded his letter with the prayer that Mary might “guide us in the ways of peace and obtain for us wisdom and the grace of a true patriotism and love of country.”