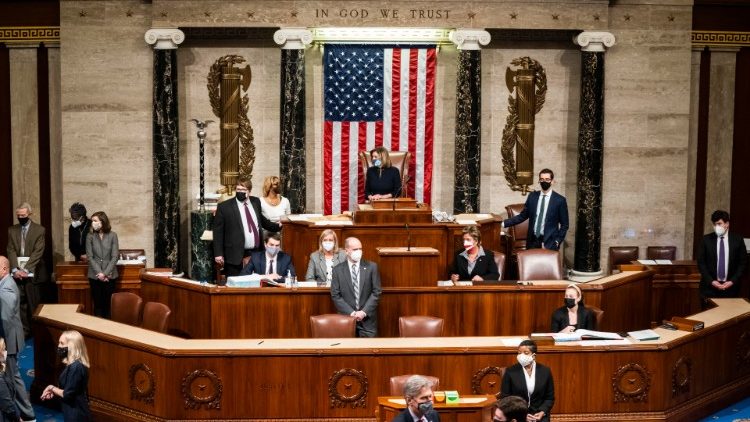 Congressional Representatives voted on Wednesday afternoon to impeach US President Donald Trump for the second time in 13 months.

The bill in the lower house of Congress passed with 232 votes in favor to 197 against.

Ten House Republicans voted with their Democratic colleagues, making it the most bipartisan vote impeachment vote in US history.

The vote came one week after hundreds of Trump supporters stormed the US Capitol.

Ahead of the violence in which 6 people died, President Trump had spoken at length to a crowd, some of whom marched on Capitol Hill and forced their way into Congressional chambers and offices.

The single article of impeachment accuses Mr. Trump of inciting the insurrection which followed his speech.

It reads: “President Trump gravely endangered the security of the United States and its institutions of Government. He threatened the integrity of the democratic system, interfered with the peaceful transition of power, and imperiled a coequal branch of Government. He thereby betrayed his trust as President, to the manifest injury of the people of the United States.”

The resolution’s passage makes Mr. Trump the first US president ever to be impeached twice.

It comes just 7 days before he leaves office on 20 January, when President-elect Joe Biden will be sworn in.

Impeachment triggers a trial in the Senate. However, Senate Majority leader Mitch McConnell said in a statement on Wednesday that “no final verdict would be reached until after President Trump has left office.”

A two-thirds majority of the Senate is needed to convict Mr. Trump.

Ahead of Wednesday’s impeachment vote, a majority of Representatives approved a bill on Tuesday urging Vice President Mike Pence to remove President Trump under the 25th Amendment.

In a break with standard procedure, House Republican leaders refused to urge members to vote against impeaching Mr. Trump. They said the matter was one of individual conscience.