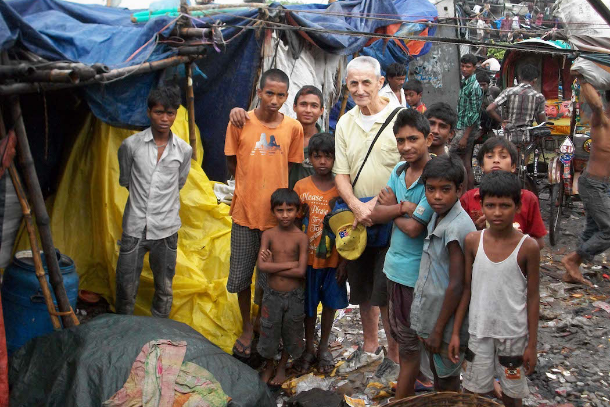 Bangladeshis are mourning a prominent American Catholic missionary who dedicated much of his life to the treatment and rehabilitation of drug addicts in the South Asian nation.Holy Cross Brother Ronald Drahozal passed away at a retirement and treatment facility run by his order in the U.S. state of Indiana on Oct. 16. He was 81.Brother Drahozal had been suffering from a range of ailments for years and had been in the U.S. since March for medical treatment.It was Brother Drahozal’s work helping thousands of Bangldeshi youth fight drug addiction that brought him national and international recognition.Bishop Gervas Rozario of Rajshahi Diocese, the vice-president of Catholic Bishops’ Conference of Bangladesh, said Brother Drahozal’s death is a great loss.”He has taught addicts values of life and helped families realize that they have a crucial role in treatment and healing of drug addicts,” Bishop Rozario, president of Caritas Bangladesh told ucanews.com.The bishop said that Brother Drahozal’s efforts helped lessen the impact of drug addiction and associated crimes in Bangladesh.”He made tremendous contributions in establishing peace in society through his work. Drug addiction is a major cause of unrest in families and society,” Bishop Rozario said.After arriving in East Pakistan (now Bangladesh) in 1962, Brother Drahozal established the Bangladesh Assistance and Rehabilitation Center for Addicts (BARACA) in the capital Dhaka in 1988. He led the organization until 1995 before handing it over to Catholic charity Caritas as a special project.During his time at BARACA, he also founded Ashokti Punorbashon Nibas or APON (Drug Rehabilitation Residence) in the Muhammadpur area of Dhaka with funding from his family and relatives, and the help of his confrere, Brother Donald Becker.In 1994, Brother Drahozal formally took over APON as the founding executive director, a role he held for the rest of his missionary life.In 2007, Brother Drahozal moved the facility to central Manikganj district with funding assistance from local and foreign donors and named it APONGAON (APON Village).The facility has a compound that includes hostels, conference rooms, a school for children up to grade five, a vocational trade school, a garden complex, and a playground.Dr. Edward Pallab Rozario, secretary of Catholic Bishops’ Commission for Healthcare, said Brother Drahozal was a “pioneer and a guiding light.””He is the first person to serve street-based drug addicts in the country. He looked at drug addicts, who live on the streets and are despised by their families, with eyes of mercy and loved them unconditionally,” Dr. Rozario told.

“He saw drug addiction as a disease that can be cured. He tried to change the lives of those who used drugs and committed crimes including robbery and even murders,” he added.Since 1994, about 4,000 people have been cured of addiction through the organization that Brother Drahozal established. It has likewise offered treatment and rehabilitation services to about 200,000 addicts directly and indirectly, according to APONGAON officials.Holy Cross Brother Stephen Binoy Gomes, who is currently in-charge of APONGAON, said the congregation would continue Brother Drahozal’s mission.”We are grief-stricken to say goodbye to a great missionary. He took up and carried out a very challenging mission to serve and change the lives of drug addicts. This is a special priority service for us and we have to carry this forward as we see it as following Jesus’ mission for healing of people,” Brother Gomes, former provincial of Holy Cross Brothers in Bangladesh told ucanews.com.An interfaith prayer meeting to commemorate Brother Drahozal was held at APONGAON on Oct. 17. Hundreds of current and former addicts were expected to attend the event.Born in Iowa, in 1937, Brother Drahozal made his first and final religious vows at the Holy Cross as a brother in 1958 and 1961 respectively.Prior to his work in helping Bangladeshi youth break free of drug addiction he taught English in several church-run schools in the country and he oversaw the religious formation of priestly and religious life candidates.