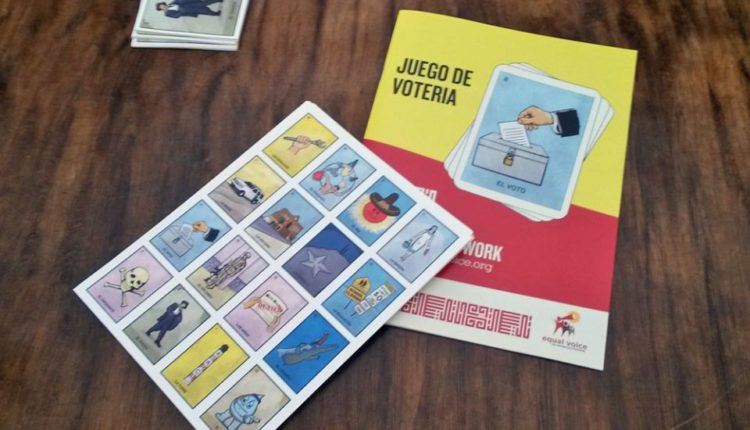 Speaking during a young adult group meeting at St. Mark Catholic Church in El Paso, Texas, Sept. 18, Mariah explained that she had come from a household where the attitude was “Why vote?”

“It’s crazy how much I want to vote now,” she said, remembering that when President Donald Trump was elected, she had felt that “a nightmare was about to start.” Hearing about immigrant families being “torn apart” is even worse, she added, choking back tears. “I feel like I’m primarily responsible because I’ve done nothing to stop it.”

Mariah, who like other members of the group only identified herself by her first name, was addressing 25-30 young Latino Catholics, all of them bilingual, most of them citizens and the vast majority of those eligible planning to vote in the upcoming midterm election.

Yet one member of the group, Liz, said she didn’t feel educated enough to vote and questioned voting’s impact: “How many years do we have to vote for the rich people to actually hear us?” Other young adults pushed back against that idea, but some acknowledged that the attitude was widespread, or even that they’d shared it in the past.

In response to low voter turnout, local Catholic leaders and advocates are working to promote voting, which some characterize as both an exercise of the moral duty to promote justice and a way to ensure that the concerns of all — including those who are most vulnerable and marginalized — are included in political decision-making.

Voting is “part of being a faithful citizen,” El Paso Bishop Mark Seitz told NCR. “The political process is a way that we as Catholics can live out our responsibilities towards our country and live out, in fact, our faith, to form a more just nation and community, to make it better.”

“Through the lens of faithful citizenship our goal is to engage as many people as possible to participate in the electoral process,” said Marisa Limón, deputy director of the Hope Border Institute, explaining her organization’s #AquíEstamos campaign. “That also works in terms of our mission of social justice through the lens of Catholic social teaching. El Paso’s a community where … it seems like a lot of decisions get made without the input of all the stakeholders.”

The #AquíEstamos (or #WeAreHere) campaign is described on the Hope Border Institute website as “an opportunity to exercise civic engagement to promote the common good while building strong communities.” The campaign partners with Catholic parishes and other community groups to register voters, increase turnout for those who are already registered and educate people about what’s on the ballot.

Part of the campaign has involved forming groups of interested parishioners who led voter registration drives at their parishes Sept. 22 and Sept. 29 and are committed to finding 20 madrinas and padrinos (godmothers and godfathers) who in turn are responsible for finding 10 people who promise they will vote and sign up to receive a reminder before the election

Giving people who would otherwise be disenfranchised the tools and the motivation to vote involves more than telling them it’s their moral duty or getting them to fill out a form.

For U.S. citizens originally from some Latin American countries, Seitz and others pointed out, voting may be perceived as useless because elections in those countries are fixed; they may not realize that the U.S. is less corrupt.

Richard Pineda, a professor of communication at the University of Texas at El Paso, said that even aside from learning about candidates and issues, people may not know basics about where or when to vote or be prepared to handle problems that might arise at the polls. “That kind of stuff is really important because I think voters have to feel that they have agency and they’re empowered,” he said.

Discussions during meetings of the #AquiEstamos groups at both St. Mark (Sept. 17) and St. Luke Catholic Church (Sept. 19) largely focused on logistical issues that could come up with voter registration during the drives they were planning for later that month

At the St. Luke meeting in particular, participants seemed exasperated by the intricacies of the state’s voter ID laws, but determined to increase participation. Some pointed out that areas with low voter-turnout tended to be neglected by politicians, even when it comes to basic issues like allocating funds for road upkeep.

Helping potential voters understand the concrete impact that politics can have on their lives in a major challenge and a major goal of those working on voter engagement.

Many El Pasoans might feel that “the issues that are being voted on are not representative of their main concerns. So there’s a disconnect between what’s happening in governance and what’s happening in the community … they don’t reflect each other,” said Edith Tapia, policy research analyst at the Hope Border Institute.

She said Hope Border Institute is trying to figure out how to talk about issues “in a way that people can see them in their lives and understand them on a very basic level, and tying that in to Catholic social teaching and social justice issues.”

Their partnership with the Equal Voice Network to distribute “Votería” — an El Paso-specific, voting-themed version of a popular Mexican game, similar to bingo, called lotería — strives to bridge the disconnect with the political world in a fun and culturally relevant way.

Votería replaces or modifies traditional lotería images with images created by a local artist that relate to voting, El Paso history or issues important locally. An accompanying booklet provides information about the subject alluded to in each image.

“These are issues that we don’t need to educate our community about,” said Cemelli de Aztlan, who does community building with grassroots organizations as a network weaver for the Equal Voice Network, which produced the game. “They know that la migra [border patrol] affects their neighborhoods. They know that [copper mining company] ASARCO poisoned their community. They know if you’re a domestic worker you’re getting shafted.

“They know, but when you see it in this very familiar, culturally empowering setting — you don’t see politics in that light. Politics is very much void of culture, or at least the politicians’ culture is not what we’re used to. And so this is a way to sort of bridge that divide, empowering them with that knowledge and with something that’s fun and real.”

De Aztlan said Equal Voice Network has already given out over 250 votería sets, including to members of the Catholic community that they connected with through the Hope Border Institute and “we know that it’s working wonders.”

For the young adults at St. Mark — who already see connections among faith, politics and the reality in their border community — voting is one of the ways they hope to change negative situations.

“A lot of these issues have hit home for a lot of us,” said Dolores, who has worked with unaccompanied immigrant children even before the family separation crisis brought attention to their plight. “It makes us want to vote more than ever.”