US Bishops: ‘No villains’ in immigration crisis 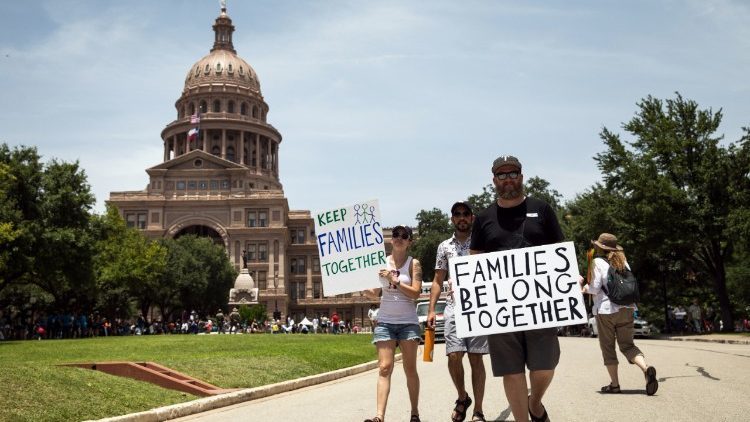 A team of 6 US Bishops spent two days visiting personnel and structures providing services to migrants entering the US on its border with Mexico. On Monday they paid a visit to Catholic Charities of the Rio Grande Valley’s Humanitarian Respite Center. The next day they visited Casa Padre Center, a government-run resettlement center for children. There they met with approximately 250 children, toured the facility and celebrated Mass with them. Later they visited a facility where migrants are processed.

Cardinal Daniel DiNardo, President of the US Bishops’ Conference, opened the press conference emphasizing that the visit was a pastoral one. He characterized the two days as full, beautiful, and painful at times. He acknowledged that they found challenges and can now make recommendations. The Bishops met with cooperation at every site, he said, and all the personnel were helpful. His conclusion:

What we want to emphasize after we’ve had our meetings is that there are no villains…. The children who were separated from their families, their parents, need to be reunited. That’s already begun…. We’re pleased with that… But it’s certainly not finished yet, and there may be complications, but it must be done, and its urgent.

Reunification of children a priority

Archbishop José Gomez, Vice-President of the US Bishop’s Conference and Archbishop of Los Angeles, said it was difficult for him to see the children on their own. “It was a special blessing to be there and help them and give them some hope”. The Archbishop said that, during the homily at Mass, they spoke of God’s presence and encouraged the children to help each other. After the 2-day visit his primary concern is the same as Cardinal DiNardo’s:  “The first reflection that I had personally was the urgency of the reunification of the families…. It’s so important that these children be reunited with their parents”. The Archbishop ended by saying that he is impressed at seeing the efforts of Catholic Charities and the USCCB in the reunification of families.

Responding to a reporter’s question regarding reconciling conservative Catholic views with conservative political stances on the issue, Cardinal DiNardo said the Catholic Faith “is not just a system of concepts”. It needs to be applied to persons. While on the one hand the country has the right to protect its borders, “we need to keep in mind a humane approach to these things”, he said.

What can be done

Petitioning Congress is one of the ways that people can help the situation, Cardinal DiNardo explained. “We have to petition Congress. We have to talk to them, and we have to make it really intense – not nasty – but really intense”.

Bishop Flores of Brownsville, TX said Bishops on both sides of the border are in communication with each other. Many of those entering the US are doing so because their children’s lives are in danger in their countries of origin, he said. There are success stories taking place in Latin America in areas where neighborhoods are being rebuilt and revitalized. “The wider conversation to address the hemispheric reality is also part of our responsibility, as a Church, and as a nation”, he said.