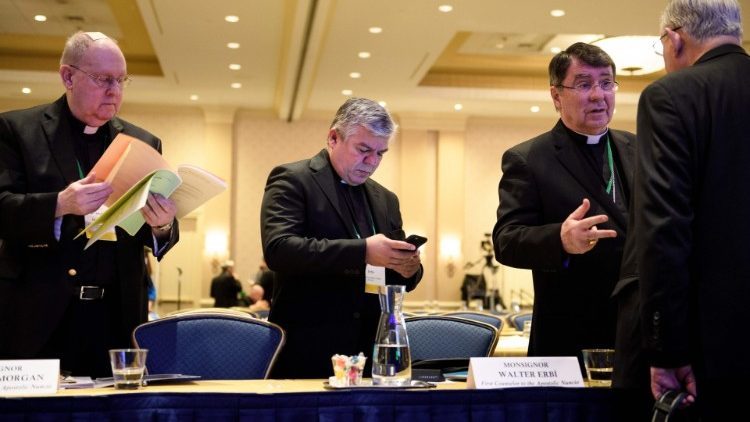 On Tuesday afternoon, the US Bishops began to discuss three proposals. They are concrete ideas which they hope will be implemented in some form in the future. Drawing on the existing Charter for the Protection of Children and Young People, the Bishops hope to close the gap in that Charter by including Bishops themselves among those to be investigated and disciplined for abuse, sexual misconduct or negligence in responding to the clergy sex abuse crisis.

Cardinal Joseph Tobin, Archbishop of Newark, explained the “Standards of Accountability for Bishops”, which is up for discussion and amendments. It was drafted by three USCCB committees and is meant to supplement already existing Diocesan codes of conduct. The “Standards…” is, therefore, a policy describing best practices to which the Bishops will be held accountable. A discussion is set to take place on Wednesday morning.

Archbishop Vigneron, of Detroit, then presented a proposal drafted by the USCCB executive committee regarding a new organization who would be entrusted with the task to investigate Bishops against whom complaints or accusations are received. The present proposal, he said, is a sketch—the basis on which a task force will build after further consultation and analysis. As it is presently conceived, it: does not infringe on the authority of any Diocesan Bishop, or the Holy See; will report to the Apostolic Nuncio who will then proceed according to its competence; will be composed of 6 lay people (including experts and 1 woman religious), and 3 members of the clergy; will be a not-for-profit corporation; and rely on the consent of each Bishop.

A lively discussion followed, questions were fielded, and alternative proposals suggested. Archbishop Vigneron admitted that there are many areas that need to be filled in due to the haste with which the proposal was drafted in order to be presented to the Fall Assembly. Cardinal DiNardo also admitted that even if the Bishops had been able to vote on it, a final document probably would not have been on the table until the June Assembly.

Protocol for restrictions on Bishops removed due to abuse

Bishop Peter Deeley, of Portland in Maine, presented the “Protocol Regarding Restrictions on Bishops who were Removed from or Resigned their Office due to Sexual Abuse of Minors, Sexual Harassment of or Misconduct with Adults, or Grave Negligence in Office” drawn up at the request of many US Bishops. It addresses the cases of retired Bishops, or Bishops who have been removed from office or disciplined with canonical penalties by competent authority within the Church. It is a resource that will aid Bishops to understand existing provisions in Canon Law, and acceptable Church practice in order to restrict the activities of a former Bishop. “It might be necessary for the bishop in a given instance to make it clear to the public that the bishop emeritus no longer speaks for the diocese”, Bishop Deeley said, offering an example. There are no “innovations” to Church Law, Bishop Deeley explained.

The Bishops were encouraged to contribute their thoughts in the form of amendments so that all three draft proposals could be improved. Amendments to all three proposals were due on Tuesday evening. The Bishops will pick up the discussion on Wednesday morning.

The proposals before the Bishops and the discussions, questions and debate currently under way are allowing the Bishops the chance to address the issue as a corporate body. A discussion of this type is a first, not only for them, but for the Church in general. Many of the Bishops agreed that the discussion and amended documents will be helpful to Cardinal DiNardo as he represents the Church in the United States at the meeting Pope Francis has called in February.