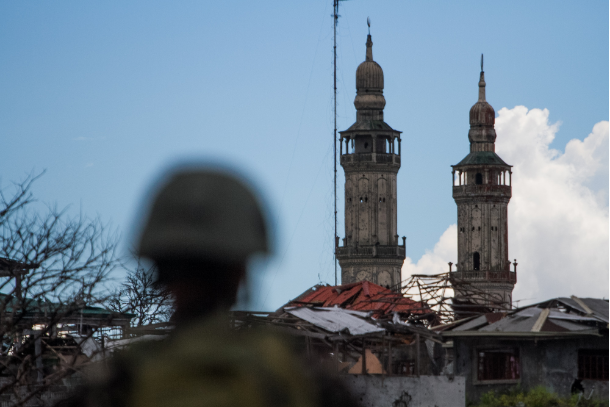 Last year’s five-month conflict in the southern Philippine city of Marawi destroyed structures, but not relationships between Christians and Muslims.This was the assurance Catholic and Muslim leaders gave the people of Marawi as they marked the first anniversary on Oct. 15 of the city’s liberation from extremist gunmen.”The conflict has actually strengthened the bond among the people,” said Father Ramonito Torres, vicar-general of the Prelature of St. Mary’s in Marawi.The priest said the conflict brought Christians and Muslims “closer” because of the “mutual feeling of having gone through the same struggle.”The people, however, are appealing to the government to listen to the communities still displaced as a result of the fighting.”Let our voices be heard,” said Jalilah Hadji Sapiin, a community leader in the Autonomous Region in Muslim Mindanao.”What do we want as people of Marawi? We want to go home,” she said.Sapiin decried what she described was the “lack of a solid framework” for the rehabilitation of the devastated city.”[The government] doesn’t have a concrete plan,” she said. “I don’t understand. It always asks us what we want … but what we say is not heard,” she said.Almost half a million people were displaced by the conflict that erupted in the predominantly Muslim city last year after gunmen claiming to be members of the so-called Islamic State occupied the city.Father Torres, meanwhile, said the Catholic prelature in Marawi was continuing a program to help both Muslims and Christians through the development of shelters, food aid, and other interventions.”Even if the extremists try to ‘clean’ Marawi of Christians, Marawi will always have a Christian population,” said the priest.Bishop Edwin dela Pena of Marawi has issued instructions to take care of the needs of people before any plans to reconstruct structures are implemented.St. Mary’s Cathedral was one of the buildings severely damaged during the fighting.An estimated 75 Christian families continue to live in temporary shelters around the city, said Father Torres. An estimated 35,900 Catholics reside in the prelature.

The government has announced that groundbreaking rites that will signal the start of the rehabilitation of ground zero in the war-torn city will be held on Oct. 17.Eduardo Del Rosario, head of the body tasked with rehabilitating the city, said the groundbreaking will begin with the clearing of debris from the worst affected areas.”After debris clearing, we will undertake road network construction with underground facilities,” he said.The construction of 320 classrooms, 24 village centers, a convention center, grand central market, parking areas, among others will then follow.The government aims to complete the rehabilitation by the fourth quarter of 2021.More than 1,000 people, mostly terrorists, were killed in the five-months of fighting that left much of the once bustling urban center in ruins.