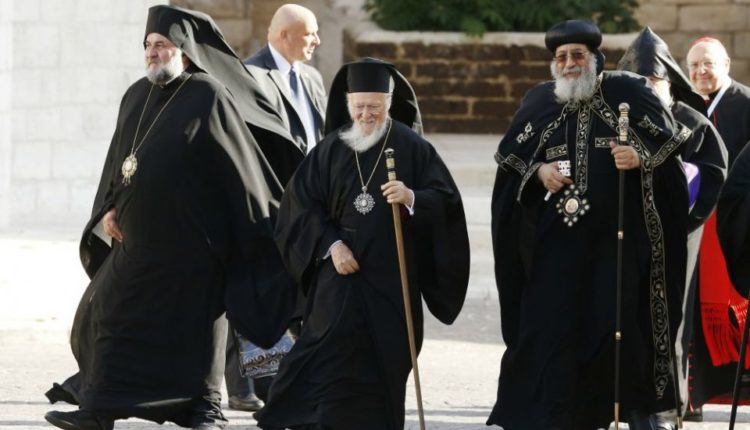 WARSAW, POLAND — As the Orthodox ecumenical patriarch goes ahead with plans to recognize an independent church in Ukraine, despite harsh Russian reactions, Catholic Church leaders across Europe have been keeping their distance from the inter-Orthodox row.

Prominent lay Catholics concede, however, that the conflict could have significant regional consequences, as well as raise questions about future Catholic-Orthodox relations.

“Strictly speaking this isn’t really a conflict — the ecumenical patriarch is fulfilling his canonical duties in recognizing an independent church, and the Russian Orthodox are contesting this,” said Marcin Przeciszewski, director of KAI, the Polish church’s Catholic information agency. “Of course, this isn’t a matter for our church or the Vatican, and they won’t issue statements about it. But Catholics in countries like ours naturally want Ukraine to be fully sovereign, and it won’t be as long as part of its church remains dependent on Russia’s Moscow Patriarchate.”

Orthodox Christians, mostly concentrated in the east, nominally make up 70 percent of Ukraine’s 44 million inhabitants. But they have been divided since the 1991 collapse of Soviet rule between a church hierarchy still subject to Moscow, and two smaller breakaway communities, the Kiev Patriarchate and Ukrainian Autocephallous Church, neither of which is canonically recognized by Orthodox leaders abroad.

Ukrainian Greek Catholics and Roman Catholics account for a 10th of Ukraine’s population, of whom the former, combining the Eastern rite with loyalty to Rome, are known pejoratively as “uniates” by Orthodox leaders and have suffered savage persecution after their church was outlawed in 1946.

Calls for a united, independent Ukrainian Orthodox Church were heard after Russia’s forced annexation of Crimea in 2014. They grew ever louder as a bloody campaign by Russian-backed separatists dragged on in eastern Ukraine, leaving over 10,000 dead and hundreds of thousands uprooted.

The Kiev Patriarchate has backed Ukraine’s pro-Western aspirations under its leader, Filaret Denisenko, who was declared anathematized by the Russian church in the early 1990s. By contrast, the Moscow-linked church has favored close links with Russia and rejected the independence drive.

The tense interplay of religion and geopolitics was highlighted last July during the 1,030th anniversary of the Christianization of Kievan Rus’, from which modern Russia and Ukraine were formed.

By then, Poroshenko and other Ukrainian politicians backed calls for an independent church, taking their appeal to Istanbul-based Ecumenical Patriarch Bartholomew of Constantinople.

Holding honorary primacy among leaders of the world’s 14 main Orthodox churches, Bartholomew has traditionally asserted his right to recognize and approve new churches. When he indicated his readiness to grant Ukrainians the necessary “tomos of autocephaly,” the Moscow Patriarchate was furious, warning its followers would resist any attempt to take over its monasteries and parishes.

In early September, the dispute reached a head when Bartholomew appointed two Orthodox exarchs, or bishops, to supervise preparations for an independent Ukrainian church, a week after failing to reach agreement with Russia’s Kirill at a three-hour summit in Istanbul.

The Russian church’s governing Holy Synod responded on Sept. 14 with a statement branding the appointments a “gross violation of church law” and suspending all “eucharistic communion” with Bartholomew’s Ecumenical Patriarchate.

Ukrainian Orthodoxy had been under Moscow’s jurisdiction since the 17th century, the synod insisted. Bartholomew would forfeit his honorary Orthodox primacy if his “interfering activities” continued.

“Constantinople’s vile and treacherous policy is damaging not just Russian Orthodoxy, but the entire Orthodox world,” the Russian church’s foreign relations director, Metropolitan Hilarion Alfeyev, told the Rossiya-24 TV channel. “The path now proposed is, in fact, an act of robbery against the territory of another local church. This is why the Russian Orthodox Church views the actions of Constantinople as an invasion of its canonical territory, an attempt to capture its flock.”

The Russian hyperbole was rejected as “dishonorable” by an Ecumenical Patriarchate spokesman, Archbishop Job Getcha, who said Moscow’s pretensions to “direct religious life in Ukraine” were “baseless and improper,” and accused Hilarion and others of seeking “to intimidate the Orthodox world” with their harsh words.

“Constantinople isn’t interfering in the affairs of another church — it’s acting within its canonical sphere,” Getcha told Ukraine’s Cerkvarium news agency. “Ukraine is no longer part of the Russian empire or Soviet Union, and if a division lasting almost 30 years has left millions of people outside any canonical church, the Ecumenical Patriarchate has a duty to take appropriate steps.”

This summer, it looked as if Catholics could be drawn into the controversy, risking the better relations heralded by Pope Francis’ historic February 2016 meeting with Kirill in Havana, Cuba.

During the Kievan Rus’ anniversary, Kirill complained of agitation by “splinter groups and uniates,” while Hilarion, a close confidant, warned darkly of bloodshed, telling the Interfax news agency the drive for autocephaly was being fostered by “schismatic structures and Greek Catholics” in the hope of bringing more Ukrainians into union with Rome.

In May, Francis assured Hilarion — in Rome with a large Russian Orthodox delegation — that the Catholic Church recognized “only one Patriarchate,” and would not “get involved in internal matters of the Russian Orthodox church, nor in political issues.”

“As discussions about self-rule cause ever greater confrontation between the Constantinople and Moscow Patriarchates, I sometimes have the impression there’s a wish to draw the Catholic Church into the conflict,” Shevchuk told Poland’s KAI agency in June. “But while we have fraternal ties with the Orthodox churches and can’t be indifferent to their internal wounds, we’ve never intruded on these painful Orthodox divisions.”

Other Catholic figures have been equally cautious.

In early October, the head of inter-Christian relations with Russia’s Catholic Bishops’ Conference, Bishop Kirill Klimovich, assured NCR the inter-Orthodox dispute was “of no concern” to Russian Catholics.

In a Sept. 26 statement, the Vatican’s Kiev nunciature denied a Ukrainian government claim that the Holy See’s Secretary for Inter-State Relations, Archbishop Paul Gallagher, had backed the formation of an independent Orthodox Church in talks with Ukraine’s foreign minister, Pavel Klimkin, and insisted Vatican had “no intention whatsoever” of evaluating “an internal question of the Orthodox Church.”

Viktor Khroul, a Catholic professor at Moscow’s State University and former Catholic newspaper editor, doubts any Catholic hierarch can be seriously accused of taking sides, given the pope’s recent efforts to improve ties with Kirill alongside his traditionally warm relations with Bartholomew.

But it could become harder for Catholics to find Orthodox partners, Khroul concedes, if Orthodox leaders end up even more bitterly divided.

Catholics in Ukraine are already having trouble working with the Orthodox in social and charitable projects, Khroul points out. The difficulties could be reflected internationally, as rival Orthodox delegations refuse to work together on help for Christians in the Middle East, or on the long-established International Commission for Catholic-Orthodox Theological Dialogue.

“Whereas Kirill, Hilarion and others used to charge Catholics with proselytizing in Russia and Ukraine, such accusations haven’t been heard recently,” Khroul told NCR. “But it will be damaging if relations with Catholics are assigned a lower profile as the Orthodox end up focusing entirely on their internal problems.”

Przeciszewski, the Polish KAI director, thinks the inflammatory language used by Hilarion and others should be taken with a pinch of salt. So should the Russian church’s constant stress on its legal and canonical rights — a principle which, if applied literally, would permanently block any change.

The Moscow Patriarchate reacted with similar outrage when Poland’s small Orthodox church became independent in 1918, Przeciszewski notes, and when Estonia’s asserted its autonomy in the 1990s after the collapse of Soviet rule.

In each case, for all the angry rhetoric, the situation soon returned to normal. No amount of legalistic and canonical arguments can alter the fact that Ukrainians are now also independent and sovereign, and entitled to their own church.

“People like Hilarion are trying to scare the world with talk of terrible outcomes — this is the politics of fear which Moscow routinely uses,” Przeciszewski told NCR. “In reality, even if Moscow threatens to withdraw from everything, this doesn’t mean it will. Contacts with the Vatican and Catholic Church are important for Russia’s state and church in building up their position in the world. It’s in no one’s interests to break them off, least of all when Pope Francis is showing such goodwill.”

Come what may, Ukrainians are pressing ahead with plans for Orthodox independence.

Poroshenko has pledged protection to Christians who join the new church, confident it will demonstrate that “no state, least of all a foreign one, can intervene in Ukraine’s internal church affairs.”

“The Ecumenical patriarch’s representatives have assured me the process of granting autocephaly is nearing completion. I’m certain we’ve have wound the wheel of this story so far that it cannot now be turned back,” the president told Ukraine’s Verkhovna Rada parliament in early October.

“Our state will respect the choice of those who decide to stay in the church structure which retains unity with the Russian Orthodox Church. But I also guarantee the state will protect the rights of the priests and laity who voluntarily resolve to stop being under Moscow.”

Meanwhile, tensions between the Moscow and Constantinople patriarchates show no sign of abating.

When a transcript of the Aug. 31 Istanbul summit between Bartholomew and Kirill was published by a Greek Orthodox news agency, it showed how the Russian delegation had dismissed the very idea of a “separate Ukrainian nation,” insisting Poroshenko’s government would soon be ousted by the Russian-backed separatists.

“The granting of autocephaly for the Ukrainian church is a matter not just for the church of Constantinople, but concerns all Orthodox,” Kirill told Bartholomew, according to the transcript. “People who took power in a coup during the ‘Maidan’ period are calling for autocephaly to strengthen their authority because they hold power illegally. This is why they’re seeking support and prestige from the Ecumenical Patriarchate.”

However, this was dismissed by Bartholomew, who insisted Ukrainians now wanted “full freedom religiously, just as they have obtained it politically.”

Bartholomew accused Hilarion, who accompanied Kirill, of “knowingly lying” by alleging that he had accepted bribes from Poroshenko. He warned that Hilarion’s “constantly aggressive and hostile attitude” would damage the Moscow Patriarchate’s position.

A joint September survey by the Kiev-based Razumkov and Socis polling centers, published by Ukraine’s Religious News Service, suggested support for the Moscow-linked church had dropped to 16.9 percent of Orthodox Ukrainians, with 45.2 percent now identifying with breakaway Kiev Patriarchate.

But Kirill has appealed to other Orthodox leaders to resist the Ecumenical Patriarchate’s “unilateral actions” and support the status quo, which makes Ukraine “part of the territory of the Russian church.”

In early October, a spokesman for Ukraine’s Moscow-linked church, Vasily Anisimov, accused Bartholomew of siding with Greek Catholics in a “blood-stained union with Vatican,” while the outspoken Hilarion charged him in a newspaper interview with a “conscious and open imposition of power through papist claims.”

Khroul, the Moscow University professor, thinks the best Catholic response will be to pray for an end to the crisis, while also standing aloof from the conflicting sides.

“We’ll certainly face difficulties in our future contacts,” Khroul told NCR. “But perhaps some Orthodox will also look at the Catholic Church more favorably now, seeing how its own internal unity, even with various rites and traditions, contrasts with the deep conflicts now occurring between their own churches.”

Przeciszewski is confident about Ukrainian Orthodoxy’s right to autocephaly and the Ecumenical Patriarchate’s right to grant it, and believes the Moscow Patriarchate’s stance contravenes Orthodox principles and merely highlights its close identification with Russian state interests.

“Now that Ukraine is an independent country, Orthodox tradition demands its church should be independent too — there’s absolutely no justification for its remaining subject to Moscow,” he told NCR. “But this is a matter for the Orthodox world to resolve — it shouldn’t affect relations with the Vatican and Catholic Church. Nor, for all the noisy protests, should it lead to some third world war.”

Jakarta archbishop calls on Catholics not to waste food