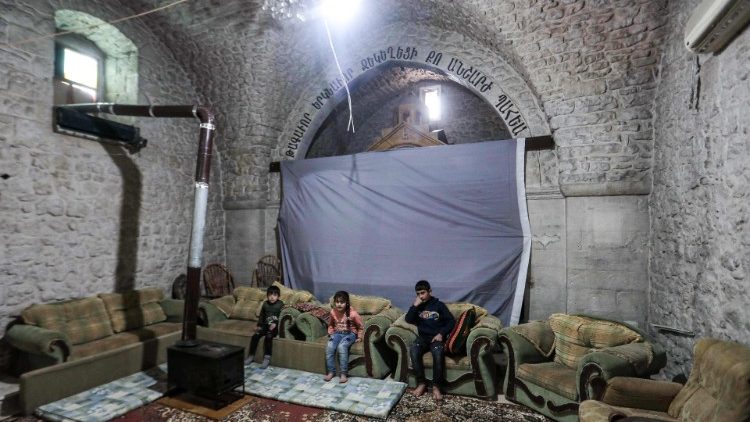 The UN’s children’s fund laments that the over 11-year conflict in Syria continues to claim victims in the new year.

The ordeal of Syria’s children continues unabated, with the conflict continuing to injure and claim lives in the new year.

“Only in the past four days – since the new year began – two children were killed and another five were injured in the northwest of Syria as violence escalated,” a senior official with the United Nations children’s fund, UNICEF, lamented on Tuesday, following recent violence and disruption in Syria.

Warring parties should never attack children or the services they rely on, said Kambou Fofana, UNICEF’s Acting Regional Director for the Middle East and North Africa.

He was referring to an attack on a UNICEF-supported water station in the village of Arshani outside Idlib in northwest Syria.  The attack put the station out of service, cutting water supply for over 241,000 people, many of them internally displaced.

Fofana did not specify who carried out the raids, but Russian jets bombed areas near Idlib on Sunday, 2 January, Reuters reported, citing witnesses and rebel sources.  It marked a new year flare-up for the last opposition-held bastion.  Warplanes flying at high altitude, which tracking centres said were Russian Sukhoi jets, dropped bombs on several towns and a main water pumping station serving the overcrowded city of Idlib, whose wider population is more than a million.

An official at the city’s water utility service said it was out of action as a result of the strikes. A senior UN official who confirmed the water station was “badly damaged” in an airstrike said such attacks worsened the humanitarian plight of millions of displaced Syrians.

The Syrian army and Russia which targets the hideouts of militant groups who control the region deny any attacks on civilians. A deal brokered nearly two years ago between Russia and Turkey, which supports opposing groups, ended fighting that had displaced more than a million people within a few months.

Meanwhile, the United States-led coalition in Syria said they struck several launch sites for short-range rockets believed to be intended for attacks on an installation used by US troops in eastern Syria, officials said Tuesday.

A statement by the coalition did not specify who carried out the strikes but said the sites “posed an imminent threat in the vicinity of Green Village, Syria,” and were struck in self-defence. The United States has about 2,500 troops in Iraq acting as trainers and advisers to Iraqi security forces.

The developments this week came just days after UNICEF reported that grave violations against children in both protracted and new conflicts were on the rise in 2021.  Syria was among countries where thousands of boys and girls “paid a devastating price as armed conflict, inter-communal violence, and insecurity continued,” the children’s agency said on Friday.

Although 2021 data is not yet available, the UN verified more than 26,400 grave violations against children in 2020, including killing and maiming, recruitment, sexual violence, abduction, and attacks against schools or hospitals.

“Children and services catering to them must never come under attack,” Fofana said. “It has been 11 brutal years of war on the children of Syria. How much longer can this go on?” he asked.

Meanwhile, the Syrian Network for Human Rights (SNHR) announced in its monthly report, released on 1 January, that 1,271 civilians, including 229 children, 134 women, and 104 victims of torture, were killed in Syria in 2021. It noted that the killing of Syrians has been continuous since March 2011, adding that 69 civilians, including 16 children, seven women, and seven victims of torture, were documented killed in Syria in December 2021.

The SNHR is a UK-based non-governmental, independent group that is considered a primary source of information for the UN Office of the High Commissioner for Human Rights (OHCHR) on all death toll-related analyses in Syria. Its 33-page report states that the crime of murder has become widespread and systematic, mainly at the hands of Syrian regime forces and affiliated militias, adding that the entry of several parties into the Syrian conflict has increased the importance and complexity of documenting the victims killed in Syria.

According to the group, the Idlib governorate saw the largest death toll compared to other Syrian governorates in 2021, accounting for 19.35% of the total death toll. It is followed by Aleppo governorate with 18%, Daraa with 16.5%, Deir Ez-Zour, then Hasaka.

Reaching out to children

UNICEF and its partners continue to support children in the Syrian crisis, to help them cope with the impact of conflict and to resume their childhoods.

Their work includes improving access to education and psychosocial support services, delivering critical humanitarian assistance in hard-to-reach areas, as well as delivering assistance such as hygiene kits, safe drinking water, and screening and treatment of malnutrition.

Archbishop Rugambwa thanks the Brothers of Charity for their missionary commitment in the world.