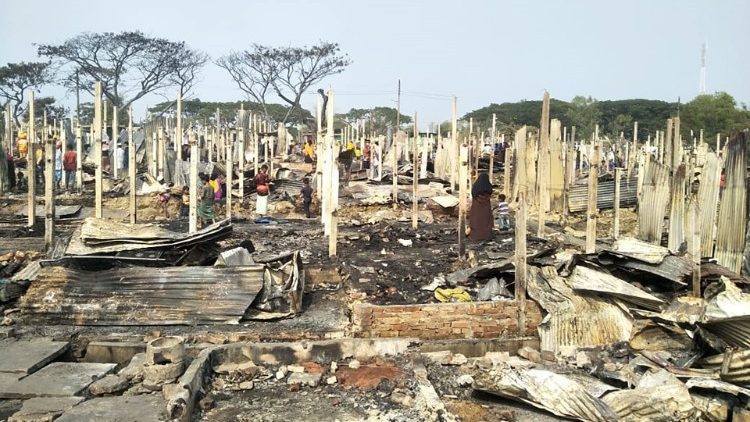 United Nations agencies and Caritas Bangladesh have swung into action to help Rohingya refugees who lost their homes and everything they owned in a 14 January fire in their camp in Nayapara.

A massive fire that broke out early Thursday morning in a refugee camp for Rohingya in south-east Bangladesh, has gutted more than 500 homes and 150 shops,  leaving over 3,500 refugees homeless.

No deaths were reported in the fire in the Nayapara refugee camp in Cox’s Bazar, said an official from the state-run Refugee Relief and Repatriation Commission (RRRC).  Several people were injured before firefighters, police and soldiers put down the fire.

The Nayapara camp hosts some 22,500 refugees, of whom about 17,800 are women, children and the elderly.  The cause of the fire in the overcrowded camp is still unknown.

Mohammad Shamsud Douza, additional commissioner of RRRC, told UCA News that about 3,500 homeless people have been taken to learning centres (used for child education), where they are being provided with food, clothing and medicines. The Commission is collaborating with aid groups to rebuild shelters as soon as possible.

UN agencies have been on the ground since early Thursday morning, assessing the damage and helping the affected. Marin Din Kajdomcaj, an official with the UN refugee agency (UNHCR) in Cox’s Bazar said they are working with the government, NGO partners, other UN agencies and Rohingya refugees to help those affected.

The UN World Food Programme (WFP) is providing emergency food assistance, including hot meals to families in need. Alongside them, humanitarian partners from the Inter Sector Coordination Group (ISCG), Bangladesh Red Crescent and NGOs are also assisting the affected people.

Caritas Bangladesh, the social and development arm of the Catholic Church of Bangladesh, said everything will be done to assist the refugees and rebuild their homes.

Inmanuel Chayan Biswas, head of operations of Caritas’ emergency response programme, lamented the loss of the little that the refugees had, and said government and NGOs are collaborating to rebuild their shelters. He recalled that last year, some 400 shelters were burned in fires.

Caritas has been active in the Rohingya refugee camps since 2017.  With funding from Catholic agencies across the globe, Caritas has reached out to over 140,000 refugees with aid including food, non-food items, water and sanitation in the past years.

In November, Caritas joined hands with the Jesuit Refugee Service (JRS) and the US-based Catholic Relief Service (CRS), and launched a new project called the Multipurpose Adolescent Centre. It aims to help the psychological development of children, provide counselling and skill development to adolescents, care for expectant mothers, childcare and care for children with special needs.

On several occasions, Pope Francis has expressed his closeness to Rohingya refugees. In a moving meeting during an inter-religious and ecumenical in the Bangladesh capital, Dhaka, on 1 December 2017, the Pope listened to the stories and pain of sixteen Rohingya refugees from Cox’s Bazar.

Who are the Rohingya?

The Rohingya are a largely Muslim ethnic people who mostly live in Western Myanmar’s Rakhine state bordering Bangladesh. Buddhist-majority Myanmar considers the Rohingya illegal immigrants from Bangladesh even though they have lived in the country for generations.

Denied citizenship under a nationality law passed by the government’s military regime in 1982, they are virtually stateless and are denied freedom of movement and other basic rights. More than 700,000 Rohingya Muslims have fled to neighbouring Bangladesh since a brutal crackdown by Myanmar’s military in 2017, bringing the total number of Rohingya refugees in Bangladesh to some 1.3 million. They are mostly sheltered in about 30 refugee camps in Cox’s Bazar in southeast Bangladesh.