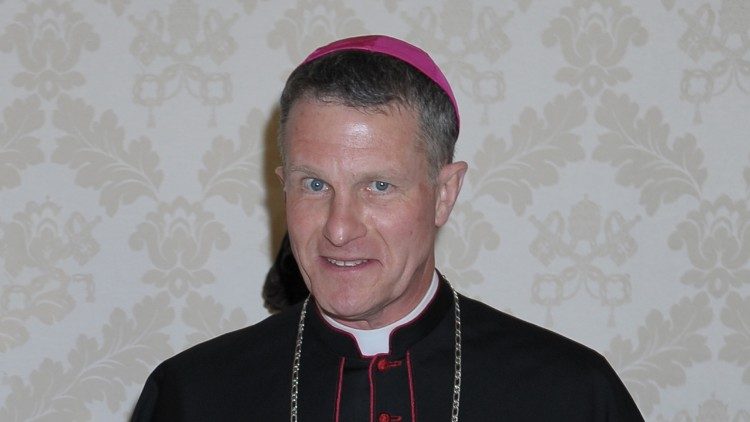 The bishops of the United States meeting in Baltimore, Maryland, for their General Assembly, elect Archbishop Timothy Broglio and Archbishop William Lori as president and vice-president of the USCCB.

Archbishop Timothy P. Broglio of the U.S. Archdiocese for the Military Services, is the new president of the U.S. Conference of Catholic Bishops (USCCB). The prelate, currently serving as the USCCB secretary, was elected on November 15 during the bishops’ Fall General Assembly which opened on Monday in Baltimore.

He was chosen from a slate of 10 candidates winning with 138-99 votes over Archbishop Lori of Baltimore in a runoff on the third ballot. In a subsequent ballot, Archbishop Lori, who is presently chairman of the USCCB’s Committee on Pro-Life Activities, was elected as conference vice president.

Archbishop Broglio was born in 1951 in Cleveland Heights, Ohio, and ordained a priest in 1977 for the Diocese of Cleveland, after earning a Bachelor of Arts in Classics at Boston College, and a Bachelor of Sacred Theology and a Doctorate in Canon Law from the Pontifical Gregorian University, in Rome.

From 1979 to 1983 he attended the Pontifical Ecclesiastical Academy, and before being appointed head of the U.S. military archdiocese in 2007  worked in the Vatican diplomatic corps, serving in nunciatures in several countries. From 1990 to 2001 he was chief of cabinet to the Vatican Secretary of State Cardinal Angelo Sodano, and desk officer for Central America.

In the USCCB, amongst other things, Archbishop Broglio has served as chairman of the Bishops’ Committee on International Justice and Peace and their Committee on Canonical Affairs and Church Governance, and as a member of the Task Force for the 2013 Special Assembly. He also worked on the Committees for Religious Freedom and International Justice and Peace and on the Subcommittees for the Defense of Marriage and Health Care.

The new USCCB president is fluent in English, Italian, Spanish and French.

Archbishop Lori was born in Louisville, Kentucky  in 1951, and  ordained to the priesthood for the Archdiocese of Washington in 1977. He has a Bachelor’s Degree, a Master’s Degree and  a Doctorate in Sacred Theology.

He was appointed at the helm of the Archdiocese of Baltimore in 2012 by Pope Benedict XVI, after serving as auxiliary bishop of Washington  (1995-2001) and then as bishop Bridgeport, Connecticut (2001-2012).

He is the former chairman of the USCCB’s Committee on Doctrine and its Ad Hoc Committee for Religious Liberty.

In 2002 Archbishop Lori was appointed to the USCCB Ad Hoc Committee on Sexual Abuse, and was instrumental in drafting the landmark “Charter for the Protection of Children and Young People”.

He began the  three-year term as the bishops’ pro-life chairman  in Autumn 2021.

Since 2005 he is also the Supreme Chaplain of the Knights of Columbus, where he has the responsibility of overseeing the spiritual welfare of the Order’s 1.8 million members and their families.

The nuncio’s opening remarks at the assembly

The meeting was introduced by the apostolic nuncio to the U.S, Archbishop Christophe Pierre, who reminded the bishops of the need for the Church to reflect on  Pope Francis’ image of the Church as a “field hospital”, that is, caring for the most vulnerable and the wounded. Among them  he mentioned migrants and young mothers. Pierre called on the Catholic Church in the U.S. to be “a missionary Church” and to take care of the spiritual and liturgical formation of the laity.

The nuncio also mentioned the Synodal path and the recent Document for the continental stage of the 2021-2024 Synod, which highlights the difficulty of many young people in accepting some Church teachings  Archbishp Pierre then invited them to accompany the new generations so that they “live their faith in a way that offers them peace of heart”. He also urged the bishops not to be “paralyzed” by today’s challenges, but to follow the young people by listening to them with patience and respectful dialogue in a divisive culture.

The USCBB general assembly will run until November 17. Besides electing the new president and vice president, as well as the chairmen of several committees, the assembly is set to discuss and vote on a number of important items.

Archbishop Lori has provided  an overview of how the Church can respond following the U.S. Supreme Court’s June 24 ruling in Dobbs v. Jackson Women’s Health Organization that overturned the 1973 Roe v. Wade ruling , returning the issue of abortion to the states.

His presentation follows a recent letter  that Archbishop Lori and three other USCCB committee chairmen sent to all members of Congress calling for “radical solidarity”  with mothers and babies — born and unborn — and advancing an ambitious legislative and policy agenda that prioritizes the well-being of families.

As the US Church marks the 20th anniversary of the adoption of the “Charter for the Protection of Children and Young People,” the bishops have preyed and reflected  on their response to clergy sexual abuse .

The “Charter” was adopted in June 2002 during the USCCB General Assembly in Dallas, to root out sexual abuse and abusers in the priesthood following the scandals emerged that year revealing widespread abuse and cover-up. Its “Essential Norms” aimed at ensuring that no one who works for the Catholic Church in the U.S. will ever pose a threat to minors or vulnerable adults,  were subsequently approved by the Vatican and have since been revised three times.

Other topics in the agenda include a discussion on their document on “Forming Consciences for Faithful Citizenship,” developed as a guide to help Catholics form their consciences in voting and other areas of public life; a  report on progress on implementing the document “The Mystery of the Eucharist in the Life of the Church,” activities under the nationwide eucharistic revival initiative, and the planned 2024 National Eucharistic Congress in Indianapolis; an update on the 2021-2024 Synod of Bishops on Synodality,  and the approval of the budget for 2023.  Bishops have also reviewed the Church’s response to the war in Ukraine.