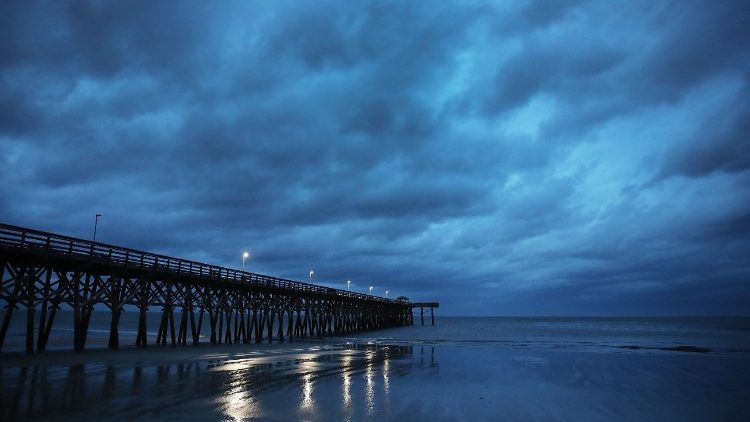 s Hurricane Florence made landfall in North Carolina on the US East Coast on Friday, bringing in record rainfall and leaving scores trapped by rising waters and thousands without power in the Carolinas, another deadly storm in the Pacific is threatening the densely populated coastal provinces of north Philippines.

‘Super Typhoon’ Mangkhut, or Ompong in the Philippines, is expected to barrel through the northernmost tip of the Philippines early on Saturday, packing 205 kph wind speeds, and gusts of up to 255 kph, that it has maintained since it struck Micronesia earlier in the week.

Philippine authorities evacuated more areas on Friday and warned an estimated 5.2 million people in the path of the powerful typhoon to stay indoors, as the country braced for heavy rain and damage to infrastructure and crops.

More than 9,000 people have been moved to temporary shelters as the typhoon makes its way towards the rice- and corn-producing provinces of Cagayan and Isabela where it is expected to make landfall at dawn on Saturday.

Caritas Philippines, the social action arm of the Philippine Catholic Church, is already having it “Surge Team” monitor the typhoon as authorities began evacuating about 800,000 people from coastal areas.

The capital, Manila, and more than three dozen northern and central provinces have been placed under storm warning signals. Classes have been suspended and government offices shut early in more than 600 places, while military personnel, medical and emergency response teams were put on stand by.

The Philippines is hit by about 20 typhoons and storms a year.  Forecasters said Typhoon Mangkhut will be the strongest so far this year with a 900-kilometer diameter.

The deadliest storm to hit the country was Super Typhoon Haiyan, which killed more than 7,500 people and affected millions of others in 2013.

Meanwhile in the United States, the National Hurricane Center said the centre of Hurricane Florence was provoking catastrophic flooding over portions of North and South Carolina.

Hurricane Florence that was downgraded to a Category 1 on Thursday night from a category 4 hurricane,  is expected to bring peak winds of 150 kmh.

The powerful storm flooded coastal streets with ocean water and left more than 415,000 homes and businesses without power across the Carolinas on Friday.  Forecasters said “catastrophic” freshwater flooding was expected along waterways far from the coast of the Carolinas.

Utility companies said millions were expected to lose power and restoring it could take weeks.

The storm is expected to weaken significantly over the weekend and into early next week as it moves farther inland, the NHC said

Ambassador of Jordan highlights refugee situation in his country

Pope: Ensure a better future for the people of Iraq, Syria