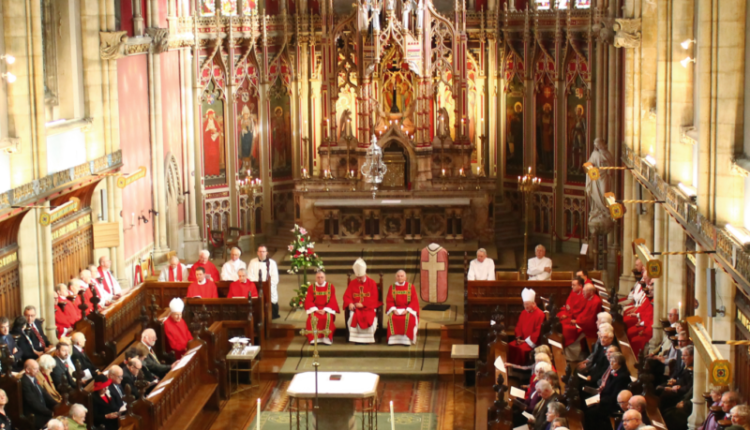 Ushaw College looks a forbidding place as you drive there across the moors outside Durham, and finding a new role for the former Catholic seminary must have seemed an almost insurmountable challenge when it closed in 2011. But seven years later, it is thriving.

It has retained its Catholic ethos, it houses Durham University’s music and business schools and it is developing an international residential research library, the first of its kind in Britain, to attract scholars from around the world as fellows to work on the collections of Ushaw, Durham University and Durham Cathedral.

I was fortunate to be one of the first fellows, and I’ve been using my time at Ushaw to delve into its collections as part of my research for a book on martyrdom. There will be 25 fellowships in this first year and applications have just opened for the next ones. (If you want to spend one or three months working in the archives and libraries, contact Dr James Kelly at james.kelly3@durham.ac.uk. Applications are needed by November 14.)

Ushaw’s recent guests include the Duke of Kent. He was shown the library and met the archivists who are cataloguing material that has been stored at Ushaw for many years, including documents relocated there from the closed English College in Lisbon. The Duke was shown the document that was part of negotiations over the dowry of Catherine of Braganza when she married Charles I. It included handing over Bombay to the British – arguably the start of the British Empire.

Ushaw’s celebrated alumni include the poet Francis Thompson. Its first public lecture of this academic year was given by Keith Hanley, professor of English at Lancaster University, who recalled Thompson’s time as a seminarian at Ushaw. Thompson’s life was a chequered one. Ill-health led him to leave Ushaw to study medicine at Manchester. He later became addicted to opium, lived on London’s streets and wrote poetry in which he tried to create a new language, influenced by late Romanticism and modernism. Some have claimed that he was Jack the Ripper. Professor Hanley preferred to focus on not just the depths to which Thompson sank but also the redemptive experiences he had, reflected in his masterpiece, The Hound of Heaven.

For those who prefer something lighter, there is a delightful exhibition on until December 22 of the work of cartoonist John Ryan, creator of Captain Pugwash and the Herald’s cartoonist for 43 years. The show has been put together by Ryan’s daughter Isabel and the Catholic historian Alana Harris. It will move to King’s College, London, next year.

No trip to Durham would be complete without a visit to Durham Cathedral, shrine of St Cuthbert and the Venerable Bede. Dotted about the pews are transparent plastic figures of soldiers as part of the There But Not There project, which serves to remind people of the fallen soldiers of the First World War, which ended 100 years ago, on November 11, 1918.

There But Not There could also describe the empty niches around the main altar, once filled with 107 alabaster statues. They were removed to prevent their destruction during the Dissolution of the Monasteries. Five hundred years later, nobody knows where the monks buried them.

Cuthbert’s remains, first taken by monks to Durham to avoid the clutches of Viking raiders, escaped destruction during the Reformation. From the shrine at Durham it is worth a drive up the coast to other places nearby linked to Cuthbert: Lindisfarne, where he was prior of a monastic community, and Inner Farne Island, where he moved to become a hermit. Others thought differently: rather than leaving him alone, people pestered him, seeking his spiritual advice, and he was chosen as a bishop, but later returned to Inner Farne, where he died in 687.

Northumberland and Durham, home not only to Cuthbert and Bede, but also to Saints Aidan and Oswald, remain wild yet contemplative places. I took the boat across a choppy sea to Inner Farne, which hosts seabirds, countless seals and a few rangers. There is a chapel to visit, but the monastic buildings Cuthbert knew have long gone, succumbing to time and fearsome winter storms. Yet one still gets a sense of the beauty and the isolation that first attracted Cuthbert.

Among the pesky people who bothered him was Elfleda, daughter of a king of Northumbria, who later succeeded Hilda as abbess of Whitby. As you walk around Durham Cathedral you might assume that its Lady Chapel succumbed to the Reformation. But apparently we should blame Elfleda and her like for its absence. Legend has it that Cuthbert wasn’t keen on women, especially the pestering kind, so as a mark of respect no Lady Chapel was built at Durham. Instead, there is a Galilee Chapel, built between 1175-89, where female worshippers could gather during monastic times. It’s where Bede is buried. Let’s hope he likes the company of women